A Complete History of Grom, part 2

So, hot on the heels of another picture of some unpainted models, are some painted ones. Groms, to be precise. Three of them:

This is the custom Grom that I referred to earlier: 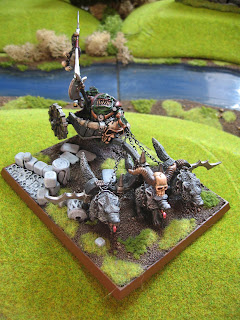 He still gets to use the original chariot from 4th edition, but I redid Grom and Niblit because I was preparing for 8th edition and a match up between Grom and Eltharion in the true historical fashion. That was before I realised that I couldn't disengage my brain for long enough to actually play a whole game through.

Given his size, he will probably serve as an Orc in my 3rd edition army. The three wolves is a bit weird - the Orcs & Goblins only make use of two wolf chariots (light chariots). The army book has a means to calculate the cost for a four wolf chariot (heavy chariot), which seems to suit the size of the model more (100mm x 80mm - the same as a unit of 20 elves in 5x4 formation).

Here are some other angles: 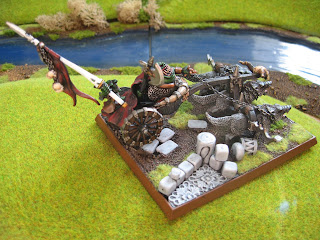 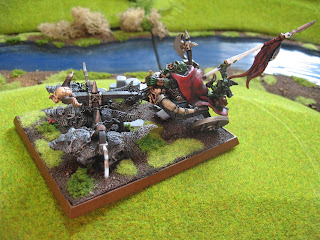 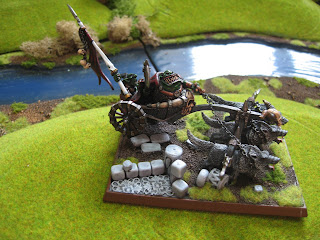 Basically, I've tried to model it so that it looks like he's swerving to avoid the wall on the base, hence the raised wheel.

This Grom has actually been taken from a squig hopper rider - I've sawed the rider off (he became Niblit) and I used the squig for Grom. This is the original: 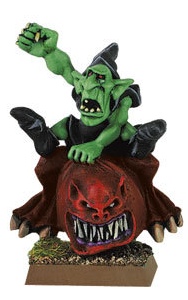 Anyway, so that's the current, chariot mounted Grom. These are the actual, official Grom models, however: 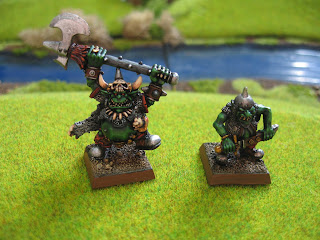 Most people will recognise the one on the left - that's the 4th edition one that comes with the chariot above. But the one on the right - that's the original Grom from 1985. He was part of a Regiment of Renown - Grom's Goblin Guard. In that history, before Warhammer 4th edition...he had nothing to do with the Elves or Eltharion at all. And Middenheim was a Dwarf fortress.

I'm planning to use the two of them as, well, goblins, in my army. One of the things I noted with interest is that in Warhammer 3rd edition, the Chaos Ally Contingent allows players to take Chaos Goblins - that is, regular goblins with chaotic mutations. In another post I'll discuss how I'll be looking at that, but it did strike me that the 4th edition Grom (the fatter of the two) would make a lovely chaos goblin...

This is a picture of all of them lined up: 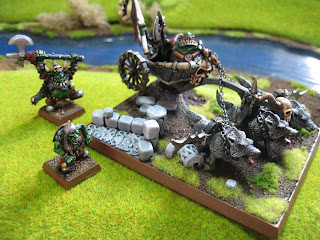 The camera struggled to focus here, so I took another with flash: 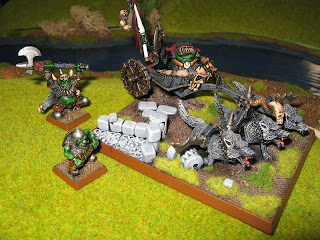 A Complete History of Grom, part 1

So. Long time since I've posted anything. That's not because I've been idle, but rather, because I've just been too busy. Unfortunately, not with painting (well, as much as I'd like, anyway).

I've mentioned before that I've been looking at some Orcs & Goblins...well, my good friend eBay and myself have spent some quality time together, and I've managed to acquire a whole ton of figures. So...lots of paint stripping, cleaning and assembling has already been done, with lots more to do.

Interestingly, one of the little goblin figures I picked up in a junk lot happened to be the original Grom - from 1985. There I was, thinking I'd never see one of those, when lo, there it lay, discarded and forgotten.

So, that inspired me. I've recently made a custom Grom the Paunch before (funnily enough, in preparation of 8th edition and an Eltharion/Grom match-up...before I realised that 3rd ed was the way to go), so I had the original figure lying around.

These are the two next to each other: 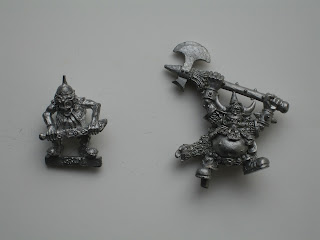 Now I had actually meant to post this up a lot earlier than I have, so now that I've given you the picture of the two naked lead models, it's worth owning up that I've completed all of my Grom models, giving me three in all. Unfortunately, my camera batteries have all died (3 of them!), so you'll have to wait until tomorrow to see the finished article. I've also managed to complete 4 more skeletons.

So, I now have 7* painted figures for Warhammer 3rd edition. And they're not even in the same army. At this rate, I'll play my first game in November 2013...

*Technically speaking, the new fatter Grom is not a 3rd edition figure, but 4th edition, but I thought it would be lovely to include them both.
Posted by Weazil the Wise at 14:21 No comments: