I was planning to get around to ranting about just the same thing, but he got there first.

And he has historical references, so his would be better anyway.
Posted by Weazil the Wise at 14:12 6 comments:

Tonight is one of those bitter-sweet nights.

Bitter, in that I am unable to go to blog-con and meet a large proportion of the English Oldhammer community for another weekend of action packed 3rd edition.

Now I've not had any time to spend on the hobby for around a month now - and I've begun to experience withdrawal symptoms. I find myself staring longingly at my bureau, pregnant with leaden opportunity, before being dragged back to the real world with something along the lines of "you didn't hear a word I just said, did you?" or "if you were watching her like you were supposed to, she wouldn't have poured cat food into her pyjamas now, would she?"

But the evening is also sweet, in that real life has no requirements of me currently (for a change). The Minister of the Interior has retired for the evening early and The Apple of My Eye is sleeping soundly.

Too excited to paint (which requires discipline, patience and some concentration), I thought I'd assess where I was with my new Dark Elf army. Since my last post, the thing has grown somewhat. Enough to have attracted the attention of The Minister of the Interior, who has now placed sanctions against lead economy.

So, growth plans for the army have been suspended for the immediate term.

History has taught us that we're often our most innovative when placed under some duress. I suspect the duress under the spotlight here is possibly greater than domestic clampdowns on imaginary armies, but I'm under enough duress to consider other ways of expanding the army.

And so I started.

Trying to find where the hell the chaos hounds were. I knew I had some, somewhere.

You know how these things go. You open a drawer and scrabble around a little. Wood elves? no. Skaven? Forgot I had those, but not what I need right now. Pre-slotta undead? Hmmm...

Time to re-organise. Recent trade efforts have also been stymied by my lack of organisation (look - another synergy - re-organise and you can a) get the chaos hounds and b) trade!).

Of course, re-organising is itself an act of madness, as what starts as an activity to determine an outcome (find the chaos hounds!) becomes a series of lead trips where you begin to imagine what all of these things might look like painted, or what the giant might look like if you converted it this way. And its always nice to find things you forgot about (Siege works? Ace!).

Anyway. To cut a long story short, I eventually reorganised. It was still chaotic, but in a different way - I could now access all of my chaos assets, at the expense of other figures. No doubt I'll re-organise early next year when it crosses my mind that I need the pump wagon or the death riders.

Still, there is a reason for the post: whilst reorganising, I paid particular attention to the forces of chaos. You may recall that I've already spent some time exploring that avenue, so investing time on this option would theoretically pay dividends in the short term - because painting just a few of these will probably double the size and capability of the force.

So these are they: the forces of chaos. Unpainted, of course:

We kick off with my chaos thug horse unit. Yeah, I know, its a bit of a demotion for Kaleb Daark, but he really doesn't scale well with any other chaos infantry. In this case, the steeds are actually the marauder chaos steeds, which are significantly smaller than their citadel counterparts, but perfect for Kaleb. The scale also comes with an implicit indication of rank - small horse? Thug. In this case, the thugs are citadel thug infantry selected because their pose is especially suitable for sitting on a horse. The chaos warrior will become the unit standard. I do have other thugs for the three riderless steeds, but I'll have to remove them from their bases. As you can see, I have enough to make eight chaos horse-thugs. 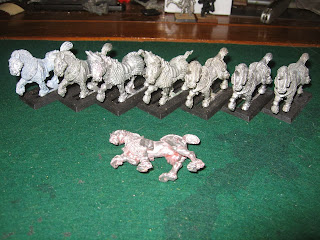 Next up are the citadel steeds. You'll notice eight steeds here, as well. Anyone see a trend? These horses are much bigger than the marauder ones, so can be used either for Marauder Horse, or for Chaos Warrior Horse, depending on... 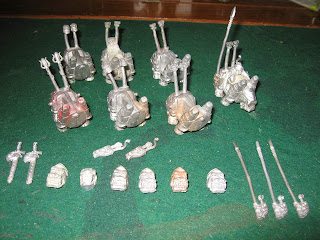 ...the juggernauts. Only seven here, but I'm sure by now you've clicked - one more, and I'll meet a magic number for a particular realm of chaos army. So, these could either be used in the true Realm of Chaos context, or, if I decide to employ the citadel steeds above as Marauder Horse, these can serve as Warrior Horse on chaos steeds. 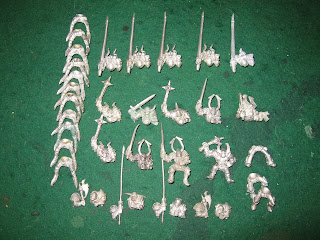 Here we have the riders. Yes, one of those is the Khorne juggernaut marine. You'll note I have seventeen riders, so I can get by without him, but somehow I think I could still use him - besides (synergy time!) - I might elect to pursue a Chaos Renegade army for Rogue Trader (after all, I love making up stories to explain to the doctor how it is that a soldier shaped blip showed up on the X-Rays again!). 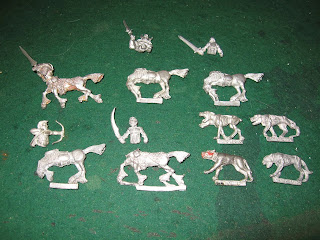 Look - its those pesky chaos hounds - together with some friendly centaurs! Not as many as I thought I had, so will have to keep an eye out for more of these. 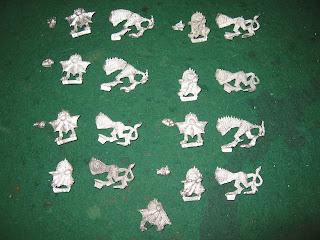 Flesh hounds of Khorne. Back on theme now. I realised to my horror that I am missing two heads. I bet you get this too when you're made to vacuum in your house: that sickening sound of something heavy being sucked int the machine, rattling its way up the pipe. Like me, you probably reason that there is no way that could be any of your valuable, precious lead, because you'd never be that careless, right? I seem to remember just such a sound occurring twice in rapid succession not that long ago, shortly after I had repackaged the hounds. It can't have been, right? Right? 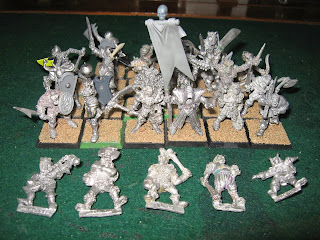 Anyway, some thugs. Target was twenty four (three eights, you see...), but I have a few more. Of course, three will be selected to ride with the thug horse units. 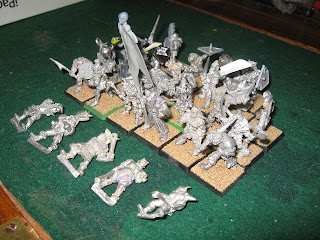 Another shot, 'cos there's lots of them. This unit also consists of 'chaos warriors' - its entirely possible I will poach from this unit to form chaos marauder infantry, depending. Almost all of the thugs have heavy armour, so this isn't the light infantry option that it might be to other chaos armies. 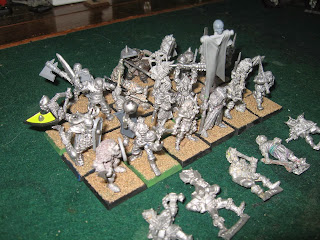 And from the other side. Don't look at me like that - I know you love poring over pictures like this. 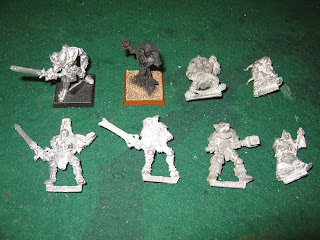 Chaos sorcerers and RoC specific Warriors. Of course, some of the specific warriors have already been painted (or converted to the cause of Nurgle), but these are enough to have either deity specific characters, or just to 'flavour' units as I need to. Also, the beast master, minus his scythe. 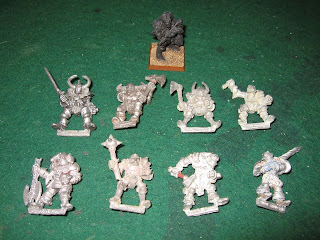 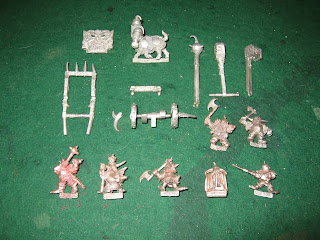 And its not chaos if you don't have chaos dwarves. Seven of the best, together with a tenderiser.

I do have some bloodthirsters and whatever the Slaanesh daemons are called, but I didn't find them in my re-org. Or rather, I found my 'monster box' - which contains just that - all the monstrous things I have. I didn't open it - I just assumed they were still in there.

Where does this leave me? Well - now I want to paint the the thug cavalry. And make a chaos spawn out of the bits box.