After a painting drought with no time given over to my hobbies....curse you real world(!)....I finally sat down yesterday and I did some painting.  I have been meaning to finish my Wood Elves for some time now, so work on this has started. (And Gaj is painting loads and shameing me into painting again!!!)


Here are the latest recruits.

One “Beastmaster” , a classic 1980’s ‘3rd Edition’ miniature stripped and repainted!  I will be the first to admit that although I really like the old miniatures I am not a 1980’s miniatures only person.  However this one is a very nice sculpt indeed.  His bears are all current ‘Wargames Foundry’ miniatures.  There was a fair amount of flash to clean up on these but they are nice miniatures and very easy to paint.


Sorry about the pictures, they are not great but my wife’s camera is a little complicated for a technophobe such as myself!

Following on from my first entry in my alternative adventuring party, I've finished another adventurer:

So I introduce to you Dumbel 'I'm getting too old for this shit' Doore, a brave and accomplished dwarf wizard, blasting his way from dungeon to dungeon as he seeks out fame, fortune, ancient lore and expensive whisky.

Again, we're going for quick painting, as opposed to amazing painting, which is something I've found is helping me get on with things. Seven painted figures and a Warhammer Quest set in one month? I think its working. Who needs detail anyway?

Also, not sure quite what happened with the pictures, I just couldn't get the light quite right, so apologies for the darkness and slight blurriness. Don't worry - there will be more opportunities to see our fearsome adventuring pair!
Posted by Weazil the Wise at 02:02 25 comments:

Goblins. You need more goblins in your life.

It's not exactly forty painted goblin wolfriders, but it is goblins, and they are painted.

As I crawl ever forward, one patient, painful, drawn-out paint stroke at a time: 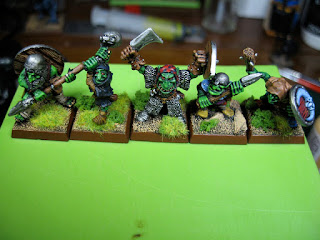 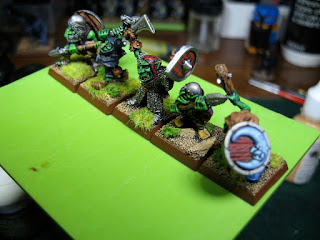 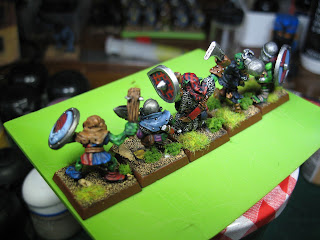 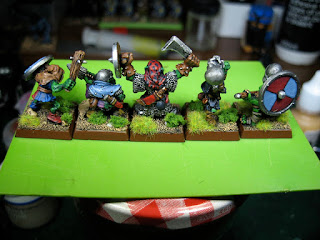 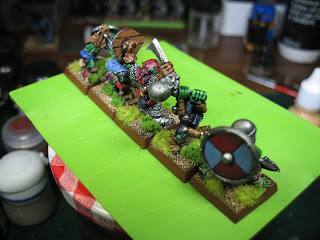 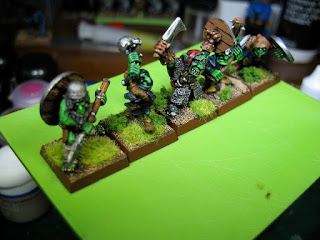 Not staged like Victoria, unfortunately, so you'll need to use your imagination if you don't like the green plastic setting. That not a problem for you, right? You are looking at goblins, after all.

In other news, the last vestiges of common sense have finally abandoned me. Lonely, confused, bruised and weeping, it phoned me last night to tell me we were through.

So now, equipped as I must surely be with either uncommon sense, or common unsense (dare I say - nonsense?), I thought I'd print out warhammer quest.

What's that? Printed it out, did you say?

Yeah. Er. About that. I, um...found it. On a hard drive. Not my hard drive, you understand. Someone else's. I thought it was my tax return. Oh well.

The thing is - I want to buy it. Its just that GW don't sell it. And after the Lichemaster arrived, I find myself unable to convince my wife that I need to spend ~£150 on eBay for what she understands is just a board game. As if!

I have fond memories of the system and I keep hoping that GW will re-produce it. I know there have been rumours to that effect, so I wait with interest. But, until that time comes about, I decided to make my own. Its much harder work than I thought, but having started, I must now finish: 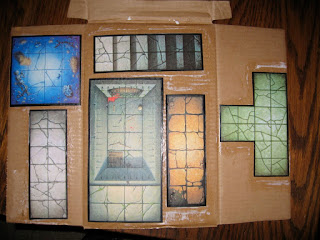 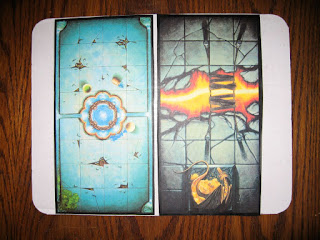 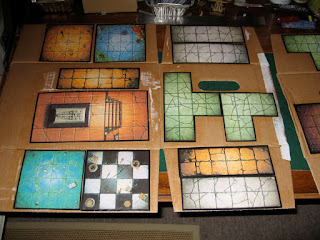 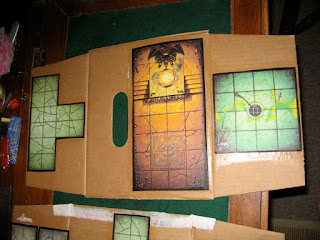 Of course, these things aren't the hard part - that comes with laminating and cutting out what must surely be over a hundred thousand cards for encounters and treasure. I've not taken pictures, because right now I hate the damn things and they have been shut away in a drawer.

Eh? Was that a question in the back? Could you repeat that? Oh, progress on the Lichemaster, you ask?

I'm getting to that, honest.

What? Another question? Pushy today, aren't we? Go on then...

Yeah - that too. Nearly there, honest! Before June ends, I'm almost certain.

Unless I decide to paint another adventurer...

In a completely unrelated note, I discovered something interesting today. I'm not big on the whole stats thing, but every time I post, I pop over and check the hits and source sites - especially as this is a great way to find other oldhammer blogs. Specifically, I found the following search term led to a hit on the blog today:

I just wish I knew what went through his mind as he read with excitement the title 'Warhammer For Adults'...
Posted by Weazil the Wise at 13:13 21 comments:

I mentioned in an earlier post my sudden fascination with the business of dungeoneering.

Now I can't rightly say where this predilection originated, but it certainly has been fueled by a few forum and blog photos that I've been admiring over the last few months. I'm not even really sure about a rule set for dungeoneering yet - all I know is that I want to be able to do it if the opportunity arises.

And chief among the requirements for dungeoneering is the Adventuring Party. That is, a party comprised exclusively of adventurers.

Fantasy adventuring parties are often stereotypical - their constituents easily categorised. We all know that fantasy ladies are swimsuit models and even though their save is 2+ (or they have AC 3, or however you want to represent a very good armour save), they appear to only wear a chainmail bikini, and some sort of belt upon which to hang their sword.

Often, there is a barbarian. If present, he must have a two handed sword, otherwise he will turn into a pumpkin at midnight.

Dwarves are always doughty and dependable, staying away from wizardry and sticking to the honest business of chopping things up manually. Their honesty stretches even further - we don't often come across dwarf thieves or assassins in the adventuring line.

Elves flounce about the place with daggers and longbows, slaying their enemy from afar whilst flickign their hair in the wind.

Heading up the party is always a fighter. Heaven forbid that the smartest chap (stereotypically the wizard, one supposes) would lead the party - we need the biggest, meanest one to do that.

Recognise this party? So do I.

So I thought my adventuring party would try and change that around. Where possible, of course - in some cases, I couldn't find figures available for what I wanted to do, in other cases, breaking the stereotype meant invoking an even worse stereotype, so I've avoided that.

And also, I still had to like my party. No point just doing it to break moulds, you know.

Anyway, enough chit chat, lets have a look at the figures. Today I present to you the young Victoria Seacrette, adventuress extraordinaire: 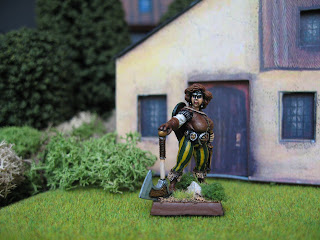 As you can see, she is fully clothed. Its all very well and good to go prancing about in your bikini whilst practicing at home, but nobody remembers adventuresses who couldn't proceed because they couldn't get through the stinging nettles hiding the entrance to the dungeon. 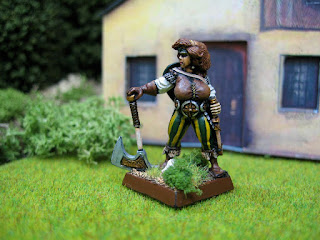 Also, she's...er...big boned. Shops at specialist stores, if you know what I mean. She may still be a swim suit model, but we're thinking about plus size catalogues here. Still, plenty of muscle helps adventuresses carry all the gold for that all important gym membership! 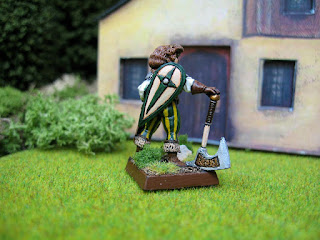 Victoria is clearly a fighter. In this case, I've allowed her (as if I had a choice!) to be the party leader, because I quite like the idea of a practical, homely, maternal sort of character mothering the rest of the party around. She's always right and she always knows what to do.

Victoria is a Hasslefree miniature known as Liberty. It's tricky to find a plus size adventuress out there - as is required by the stereotype, fantasy females are traditionally naked, but even those that aren't are in pretty good shape. I love the Hasslefree range and they do have plenty of glamour models to choose from too, but they have a super selection of bulky ladies too.

I've been exploring other figure manufacturers simply out of the awareness that Citadel classic figures are going to become rarer and rarer. I'm fine for a few years, but much like carbon fuels - the sooner we start thinking about alternatives, the easier it will be later.

Some action shots, seeing as how I've set up the stage:


Story wise, I haven't thought about it much, but I think that Victoria is the oldest child of the Seacrette family. The family is middle class - well off, but not titled or holders of much political sway. Her sisters are all small, delicate ladies, far easier to marry off than she ever was. She is headstrong and capable, two things that terrify so many men of the old world. Instead, she has elected to explore a life of adventuring, keeping options open on any 'real' men she happens to meet on the way.

Finally, if you look at the pictures closely, you'll see that poor Victoria doesn't actually have an amazing paint job. This is a combination of trying to paint quickly, a ragequit and the fact that I think I'm going to need glasses as I just can't bloody make out what the hell it is I'm painting anymore. The ragequit happened as a result of trying to paint the same bloody line five or six times before I realised there was a raised 'rim' on the shield that was confounding me.

Anyway, she'll do. I'll only varnish once the whole party is complete, so there is time to go back and neaten up.
Posted by Weazil the Wise at 12:03 15 comments: