Terror Of The Lichemaster: The King of Spades

It's been a long, long search, but finally, finally - Ranlac has a home: 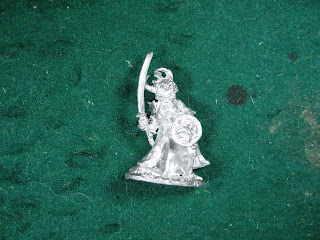 My home, to be specific.

Which takes us to 13 of 17 figures. Only Corabell, John-boy, Grimwald and of course, the Ace of Spades himself - Heinrich Kemler - to go.

Interestingly enough, the rarest of those for me now is actually Grimwald. I've only ever seen one of those, just when I started this exercise. I could have had him for £12, but I thought that was too much at the time.

Anyway, this is where we are now: 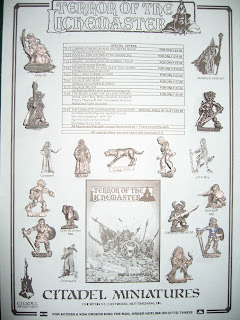 And, with three of the big four in the collection, this thing is starting to feel tangible...
Posted by Weazil the Wise at 13:27 6 comments:

Email ThisBlogThis!Share to TwitterShare to FacebookShare to Pinterest
Labels: Terror of the Lichemaster

Well, Erny has chucked us into the thick of the thing. As mentioned in my previous post, I've opted to participate in a Play by Post WFRP campaign. We have a forty eight hour 'turn', in which our actions are to be posted. Quite sedentary by the standards of most role players, but still punishing for new dads.

Also, we opted to start with the Oldenhaller Contract - the intro scenario in the rule book, just so we could get into the thick of things before commencing with The Enemy Within. Our characters are the same, however. 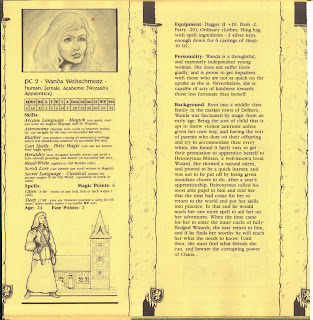 Anyway, check out the unfolding of this little exercise over at the blog:

A word of caution - we are seven different authors* working completely independently of each other, as and when we're able. It's not The Lord of the Rings.

Finally, by way of linking this post to something vaguely warhammer related - now that I've mentioned the Oldenhaller Contract, you should be able to cross the bridge of the river Pun and make the connection with the Oldhammer Contract. Clever fellow, that Zhu.

Email ThisBlogThis!Share to TwitterShare to FacebookShare to Pinterest
Labels: WFRP

Sabotage - The Enemy Within!


I lamented in my previous post about the considerable amount of time I've had to allocate from my hobby to my new family. And, try as I might, I've yet to be able to convince my dear daughter that being quiet and lying still is a hugely rewarding activity to be undertaken whenever possible.

I tend to use the word 'sabotage' to describe anything that inhibits hobby time (you know - like life), but almost always, that sabotage comes from elsewhere - an outside source.

Unfortunately, I think I've just gone and sabotaged myself.

Erny, the proprieter of Erny's Place (not to be confused with Ernie's Place) declared that he would start running a Warhammer Fantasy Role Playing campaign. It is to be an online exercise, you see.

Interesting, I thought. I'd like to see how something like that pans out, seeing as I have a vested interest in online 'board' gaming. But then he did something unexpected: he invited people from the internet to play.

And, like James Bond to the arms of an eastern european spy in a bikini, I folded and applied to participate.

Masochism being my new favourite activity, I then thought - I wonder if I could write some sort of journal from the view of the character I play?

So, I've clipped time from my dwindling supply of hobby time in order to play an offline RPG online. And I've proposed to write about it.

The campaign he will be running will be the (apparently) hugely atmospheric The Enemy Within - the first of what I understand is a series of campaigns set in the Old World. We will be using the pre-generated characters the module supplies, and in the end I have elected to play one Wanda Weltschmertz.

Wanda, as you may have guessed, is a woman. And, whilst it may never have been expressly stated, it is now: I am not a woman.

Which brings me on to my role-playing credentials. Like almost all of the the people involved in this hobby, I started with Dungeons and Dragons (the Rules Cyclopedia, if you must know), before discovering the joy of lead. I was young and I didn't really understand the difference between role-playing and roll-playing. I wasn't entirely clear why my strength 18(99) minotaur dragon knight fighter/mage couldn't carry 10,000 pieces of gold and 500 feet of rope in his pockets, whilst hefting two vorpal axes of berserker rage with extra giant strength (+5/+10 vs undead).

Later on, when I started mastering games, I realised what role-playing really was. But by then, it was too late. The problem with roll-playing is it quickens the route to meta-gaming. Very quickly, I realised that I couldn't 'unknow' the things I knew. All my characters knew that killing trolls involved fire - even though they'd never seen a troll before.

But, throughout the D&D, I never ever played a female character. Or even a human character.

At this point, I'd suggest my credentials are, at best, dubious.

Now I've kicked around the fantasy world a bit. Been around the block a few times. I know Wanda probably looks like this: 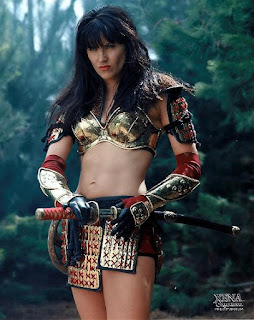 ...because that's what fantasy women look like, right? I mean, the fantasy we're talking about here is not the fantastic, is it?

This is the drawing from the module that Erny provided: 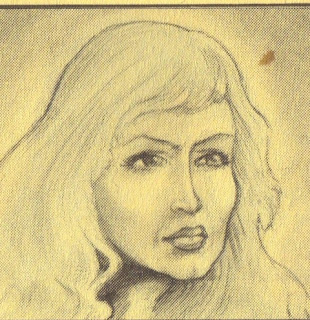 But a casual conversation with someone regarding WFRP set me straight. Apparently, the old world is a dark place. It is the historical medieval world, but with extra hopelessness and darkness thrown in. He advised that something like this might be more appropriate: 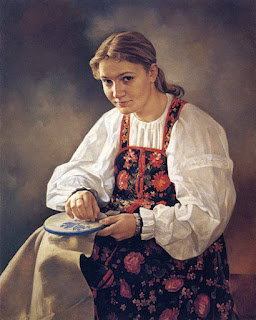 He also mentioned mud. Lots of mud in the Old World, apparently: 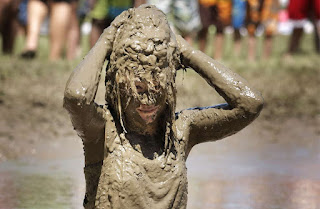 Anyway, this is another drawing of Wanda from the module:

Whilst there's nothing to say she isn't wearing a plate mail g-string, I would suggest that's probably not the case. I imagine she would call that garment she's wearing a 'frock'.

Her special skills are that she can read and write. Look - she has a handbag. And she's not afraid to use it!

Back to WFRP. I've never played it. Ever. I remember picking up the book once, paging through, and taking note that necromancers will eventually develop a funny smell and that children and small animals will avoid them. Apart from that, I know nothing.

My point is that, for Erny (the GM), I should make the ideal player - because I know nothing. He could tell me anything and I would have to believe him. I can never say something like "1d6? I'm sure it says 2d6 in the description..."

In short, my role-playing credentials are second to none. 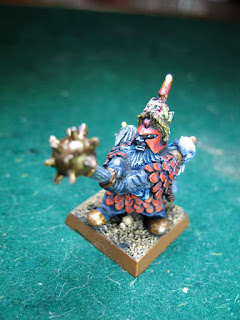 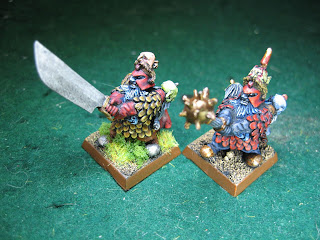 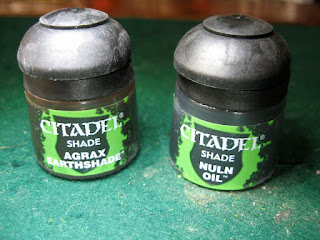