Battle Report: The Vampyr of the Riding: Turn 4

As you no doubt know, the common skeleton can muster 4" of regular movement, pushing that to a jaw-dropping 8" on the charge.

8" was hardly going to hit the Hammerers on the bridge. 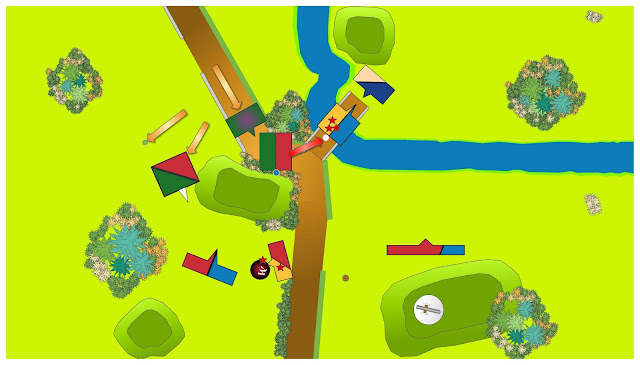 But, you may not know, the humble vampire - of which Danni is one - can manage a much more thrilling 6" move, resulting in a breakneck charge of 12" - exactly the sort of thing that could result in the sudden death of of some dwarfs exploring a bridge.

And so, screeching a cry of "HEROHAMMER!", Danni charged alone into the rear if the Thunderbuckle Household Guard.
The Hateful Eight (Five?) rallied, reforming in front of the bridge and establishing a future hammer for the vampiric anvil that had just arrived. 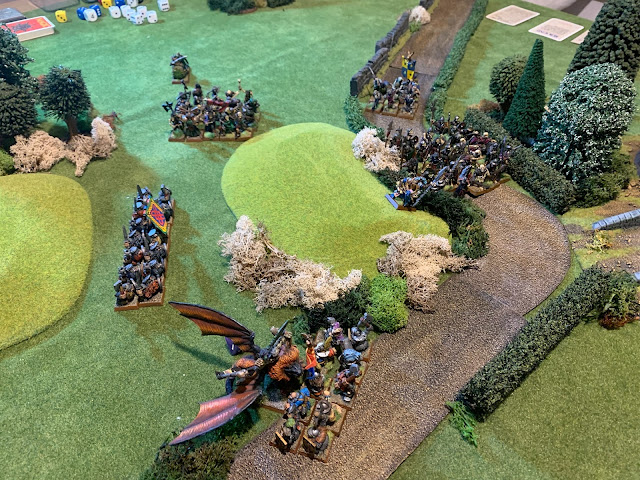 Having already set expectations with Matt for the mediocrity of a Tomb King and the power of the Manticore, we fully expected A Certain Outcome in the combat with the Light Brigade. What neither of us had anticipated (certainly, I had forgotten) was just how rich the stat line of the average Rune Lord happened to be. Given that we had spoken about challenges we had discussed the Warhammer practice of neutralising powerful characters with challenges to preserve rank and prevent casualties (a thing repaired in later versions with overkill, as I recall). As a result of that conversation, I decided that Bofel wouldn't issue a challenge, if nothing else to allow Matt to experience what a fully wired Manticore could do in combat. He decided to split attacks: half on Bofel, the ancient Rune Lord, and half on the unit itself.

What transpired was less inspiring. Between Mihartiskaphut and the Manticore, they managed a single would on the Light Brigade. The rest of the Light Brigade watched in amazement, though, as Bofel beat six shades of shit out of the manticore, because, well, he was just so much stronger than we anticipated!

And also rolled some sixes. He's not THAT strong, after all. Just stronger than we anticipated.

Fortunately, Mihartiskaphut was resolved to fight to the (re)death, and stubbornly passed his break test. 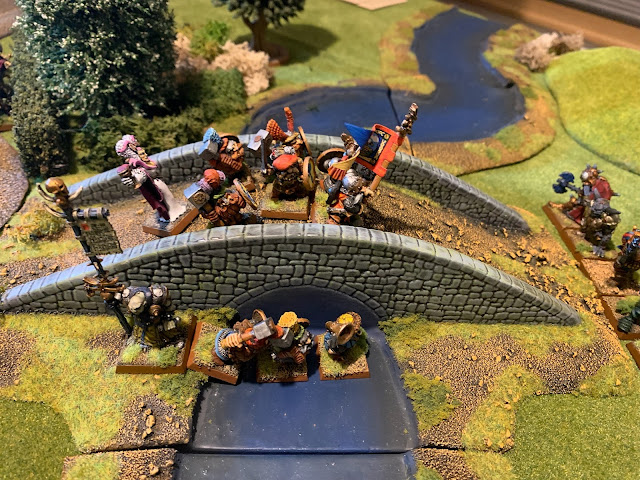 Danni's charge resulted in a much more predictable outcome: Hammerers formed ranks as they looked to protect Hesior from the Vampire - but to no avail. Their eyes were still wide with shock as their heads sailed from their necks, or their bodies were launched into the river from the bridge: four dwarfss crumpled like paper before the wrath of the Vampire.

Hesior bade his dwarfs stand aside: he knew this was his fight alone. Inspired, the Hammerers passed their break test and prepared for their lord's retaliation.

Both the Undead and the Dwarfs denied each other any opportunity to cast with well played dispel cards.

Darkness was closing in as the day waned. The Longbeards refused their flank to the approaching Undead, but the lines were otherwise set.

Big Jessie, was primed and ready to go. The halflings had cleared her down, re-aligned her and cheered as she launched six pounds of solid iron at the skeletons of the 1st Companie of Averridge. The ball crunched into the middle of the unit, disintegrating one, and only one, skeleton, before digging itself firmly in the ground just in front of the second. 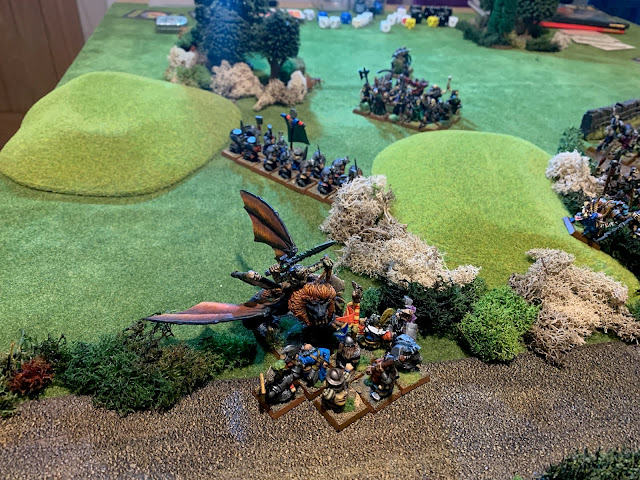 Mihartishaphut and the Manticore again were outclassed by Bofel, who chose to panel the Tomb Lord into, well, the manticore, one supposes. Three wounds were lost to Mihartiskaphut then - not enough to (re)kill him, but certainly enough to cause him to ponder his life (death?) choices. The manticore was able to bite through all of Bofel's considerable experience and defence, causing a single wound to the old dwarf. Again, the tomb king refused to flee, and the two units remained locked in combat. 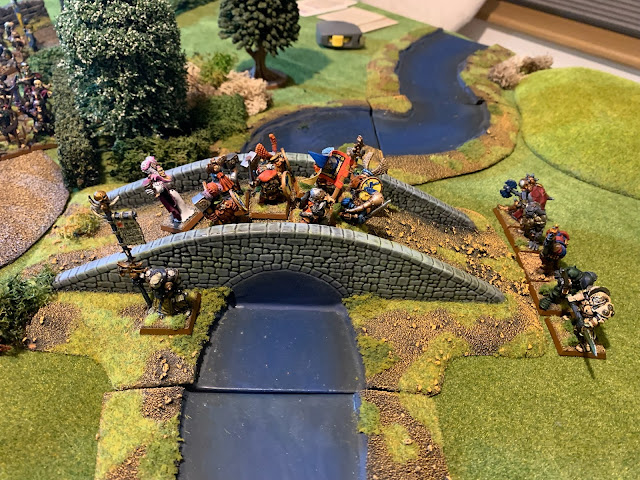 Hesior issued a challenge (HEROHAMMER!!!). Danni perceived the slight confusion on his face before he heard the words he hated most.

"But, you're not a woman..." started the dwarf lord. Danni was on him in a shot, rage pouring into every blow as he battered Hesior.

The dwarf was made of stern stuff, blocking what he could and receiving with stoic grunting that which he could not, in the end only taking one wound. Danni's eyes widened as the dwarf returned the courtesy, suffering two wounds in the process.

One might argue that Danni's concentration was off because even as he battled Hesior on the bridge, he was raking Elrich's mind (HERO!!! HAMMER!!!), snatching from him The Radiance of Ptolos in a final Mental Duel. No other magic took place, with Elrich barely managing to counter anything the vampire tried to achieve.

Those who bore witness to the terrible battle on the bridge attest to the might of dwarf and the vampyr, who smote each other with such force as to crack the very bridge itself and cause waves in the river below.

They say that the deadlock was broken by the Grey Wizard who accompanied the constables and their allies that day: he was moved to rescue Captain Prangle and whichever surviving residents of Averridge there remained.

Realising the undead had the advantage and that they were enveloping the dwarf position, he called forth a bridge of shadow and compelled the dwarf commander and his personal guard to follow it to safety. The vampyr did not deign to pursue them. instead regrouping his wicked forces and ordering them to continue the march westward on the road to Shoodthorpe.

The dwarfs, accepting the ancient wisdom of living to fight another day, themselves withdrew north of the field, skirting around the silent undead, who ignored them as they passed.

Captain Prangle was found to be alive and well, having gathered no fewer than thirteen constables from their rout into the safety of a nearby forest. Although the Imperial and Dwarf forces had neither apprehended the vampyr nor stopped the undead advance, their spirits remained high: their small force, being still well provisioned and not overly fatigued, was now behind the undead army; well positioned for a reprisal if they acted with courage and resolution.

Also, their champions had faced both a vampyr and a manticore in single combat, and both had distinguished themselves admirably.

The matter most paramount on Captain Prangle's mind was to send warning to Shoodthorpe, so that they may have time to prepare. To this end, the wizard conjured a steed of shadow, which carried him west through the night, in order that Shoodthorpe would have the time to prepare for The Vampyr of The Riding...

There we have it. Many thanks for holdng on long enough to read this post - I forgot how much work it ended up being to do this sort of thing and had not yet thought to adjust the load in my life - y'know, just before Christmas. It was fun to put together a report again and I hope to do something similar again soon.

I'll definitely focus on better lighting and making sure the pictures are clear of clutter. I'll also take actual notes instead of having to use the pictures to recreate the crime scene like a fantasy CSI unit.