I thought about it. We could talk about why I've not posted for a while.

But lets be honest, we know each other now. We don't have to pretend, do we? There's no need for small talk. Just come in. You know where the fridge is.

Realms of Chaos is quite big* at the moment.

Not as big as The Golden Gobbo, but big, none the less.

Unfortunately, for much the same reason that I've not posted for a while, I was unable to enter the event, despite my best efforts to get things ready for it. for a long while, I wasn't sure where I was going with the entry. The first Golden Gobbo was all about a single infantry figure, and, although I've been working on many of these in the shape of my undead army, I was at a loss for ideas.

Then, as the battle with Andre lined up, I started looking at The Lost and the Damned - the tome of Nurgle and Tzeentch. In there, I noted that the undead could serve in a Nurgle army.

So, looking at my figure collection, I though that I could feasibly produce a champion of Nurgle and possible a retinue for him.

I produced a champion called Gromeo. We'll talk about him some more later, because he's not the chap we'll be looking at today. Of note today, is the fact that Gromeo managed to roll a level 15 wizard as one of his 'hangers on'.

Suddenly, the way was clear. Here, then, was a fine infantry figure, full of potential and suitable for a painting contest. Unfortunately, August and September attacked together, putting me out of the contest not long after I had started.

But, today, I present the fellow. I've got a back story too, but its too closely linked to Gromeo to be revealed here. What we do know is his name: Onowitz Mann'fluh. I'm not a big proponent of random apostrophe's in fantasy names, but we can be a little flexible, can't we?

Instantly I rolled the wizard, I knew the figure to use. I have always favoured this figure amongst the champions of Nurgle, being suitably sinister but without obvious deformation.

Imagine my surprise, then, when I looked at the silly bugger and realised that he was a champion of Slaanesh. This one, to be precise: 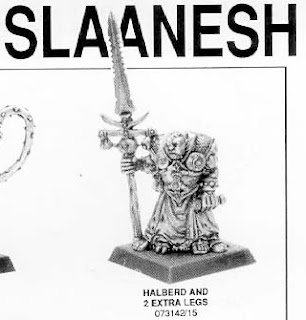 Well! That would never do! There were three problems: One, he had a jolly great symbol of Slaanesh on his head. Two, he has a small screaming woman attached to his breastplate (which didn't strike me as very Nurgle like). Three, when I rolled him up, he ended up carrying a magical banner. Of course, this figure has a spear.

Anyway, after having had my way with him, we've succeeding in removing any evidence of Slaanesh from the chap. Here he is: 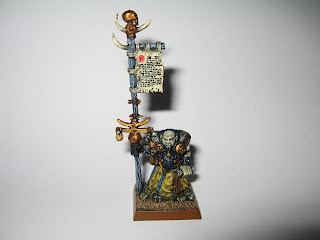 A more level shot, allowing us to look at the ...er... thing on his chest: 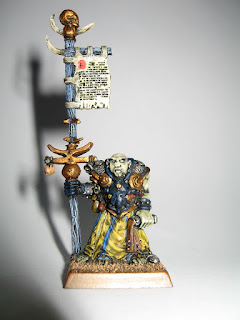 And, a shot of the rear: 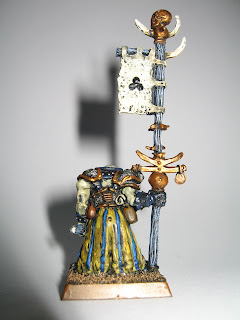 Again, I shall claim the defence of fatherhood when you see that I've not staged the shot. I apologise for the brutal lighting and merciless flash, but I don't want to wake my child up. Hobby work is so much harder when you have a five month old yelling at you.

As mentioned, we'll come back to Gromeo and his curious followers in a later post, where we can reveal just how young Onowitz found his way into the favour of Nurgle.

*Well. Big in the context of a handful of enthusiasts who have refused to let go of the 80's.
Posted by Weazil the Wise at 14:07 9 comments:

I went to visit Andre in order to play my first game of Warhammer 3rd edition in twenty years. You can find him on the map. Its always nice to actually meet people that you have only dealt with digitally. They never live how or where you would expect them to, and they never look how you thought they would.

Once the niceties had been attended to, Andre showed me his gaming set-up. I'll talk about that in another post, but two of the things he had on the table were the Citadel Battlemat and, well, another Citadel Battlemat. What blew my mind is that it is not the crusty paper roll that was produced a few years ago, but its actually a cloth (or cloth backed) 6'x4' gaming mat.

You can iron it.*

So I bought one. It meant I had to have a conversation with a GW store worker (marine?) with a serious BO problem, but even so, the product is still worth it.

In fact, so pleased was I with the thing that I broke out the figures and took pictures. It makes staging much easier for me. These are the pictures I will show you today.

What I won't do, is show you pictures of the battle.

I know, I know. I'm sorry. I had left my camera at home, you see. As the proprietor of a blog, it is simply irresponsible. Were blogging a licensed activity, my license would be revoked.

We were overcome. In the end, we decided that it was better for our own states of mind that we play than we dither with his wife's extremely powerful and confusing camera. Also, we would have had to do a lot with the lighting. And we hadn't played Warhammer 3rd ed. for twenty years - we reasoned that you, dear reader, would be forgiving. Like men released from prison after a twenty year incarceration, our minds were only on one thing.

I can summarise the battle very simply: I took Undead. He took Wood Elves. No Wood Elves were harmed in the prosecution of that battle. The treeman (technically not a wood elf) was also unhurt.

Now that you have dealt with your disappointment, we can move onto a silver lining of this specific cloud. As a result of preparing for the game, I had to paint some figures. Let us bask in their glory now.

Stage 1: Buying into the game

For the purposes of constructing my army, I've used the Warhammer Armies book. I realise that we are amongst gentlemen here, old-hammerers of distinction and class, so I know of no compelling reason to enforce the distasteful habits associated with vendor-supplied army lists. But, as I consider Warhammer Armies a thing of beauty that has largely informed my interpretation of fantasy warfare, I have elected to bind myself to its tenets.

So, in order to buy into the game, as it were, one requires simply this: a General, 20 skeletons and 10 grim reapers (skeletons with two handed weapons). 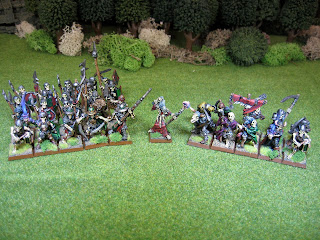 Although I've discussed this milestone before, I thought it would be nice to look at the thing again. And it allowed me to play around with my figures, scenery and the new battlemat.

Stage 2: Cleaning up a bit, really 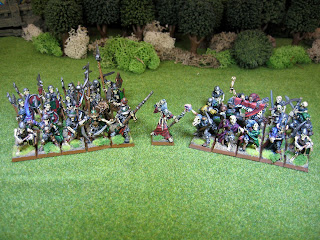 Stage 3: Enough units to manoeuvre with

What's that coming over the hill? Is it a monster?

I suppose it sort of is, as it's not an animal, vegetable or mineral. It's a liche, to be sure, with 20 of his favourite zombies. 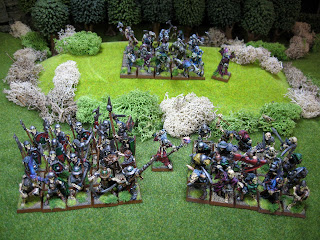 Now feels like the right time to some close-ups. Below: grim reapers! 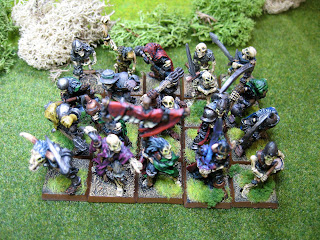 Zombies! And the liche: 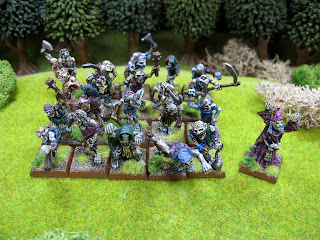 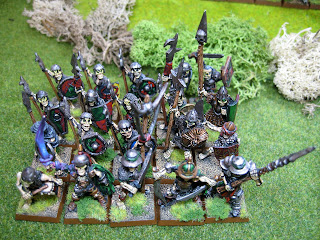 Stage 4: Inviting some friends to play

I've had these chaos dwarves hanging around for a while. They looked bored. As an open minded, 21st century, equal opportunity employer, I thought it prudent to offer them an opportunity with my undead. 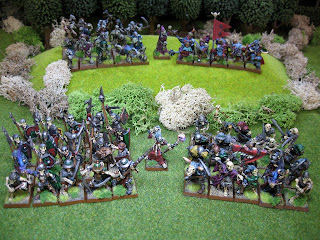 And you can see them a little closer too, if you like. Looking at the picture, I see that I have forgotten to  do any highights to the banner, which I destroyed earlier in its life through varnishing. I've corrected the damage, but it looks very flat. 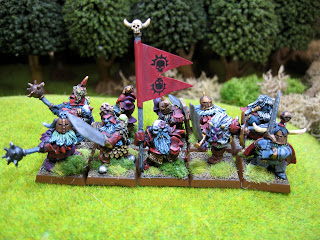 So, what we have here is a legal (*cringe*) Undead Army. Let's talk about the milestones.

For some unknown reason that I cannot surface, an assortment of figures following the same broad outlook on life (and death) becomes an army when it reaches 70 figures. Less than 70 figures? Gang. 70 and onwards? Army. I don't know why.

So the Undead Army milestone is simply this: it's now an army.

But there is another, richer milestone. I've painted enough undead rank and file to cover the forces of the Lichemaster in The Terror of the Lichemaster. I'm still missing the commander-in-chief, but I'm sure we'll all sleep better tonight knowing that his forces are ready for him when he arrives. Now I need to start working the Imperial side.

So, what's next, now that I have an army? I was hoping to move into another army to create an opposing force for the undead. Having learned from experience from the game against Andre, I realise that I need to spend some more time on the undead, as they're quite bad at warfare.

There are two angles to this - the first is that now that I have enough rank and flle, I can focus on the more interesting things like the war machines and the corpse cart. I have some cavalry to throw at the problem and I believe I've sourced some carrion crows as well.

The second, and probably the route I'll explore next, is that I can pursue the creation of a second army, which could be both the opposing force and, when larger forces are required, part of the undead army.

If we consult the knowledge locked deeply within the tome of The Lost and the Damned, we see that Nurgle is also an equal opportunity employer, seeing the undead as boon members of his armed forces. Things have to be done in multiples of 7, of course, so I'd need to paint two extra skeletons and another zombie, but that is achievable. We see now that this force would not become part of the undead, but rather, the undead would become part of a Realms of Chaos Nurgle army.

In a bizarre and unplanned twist of fate, I have more RoC champions of Nurgle than of any other deity. It must be destinee destanie destany fate!