It has taken months.

Orlygg has raised this question before. Curiously, it was also a chariot for him.

Month upon month I would gaze at the Ironclow chariot sitting on my desk. I would stubbornly refuse to complete it on the grounds of its unwordly hideousness, and it would stubbornly defend all of the figures behind it, refusing to let me move on to them.

And so we were trapped in this loveless relationship. It refused to let me see the children and I refused to give it the love it needed.

Why is it so ugly? Where do the influences come from? What sort of oriental, viking precision goblin box was this thing? I know Ironclaw models are generally like marmite, but with this one glaring exception, I've always found Ironclaw fascinating.

So, I've plumbed new lows in my painting standard (which is what happens when one closes ones eyes and thinks of England) and completed the revolting thing - enough to get it off my desk and free up all the beautiful, patient wonders hid behind it.

Even the camera struggled with this one - unsure of its focus - not wanting to emphasise any part of the thing, lest the operator lose an eye or a mind.

Anyway, heres what I've got: 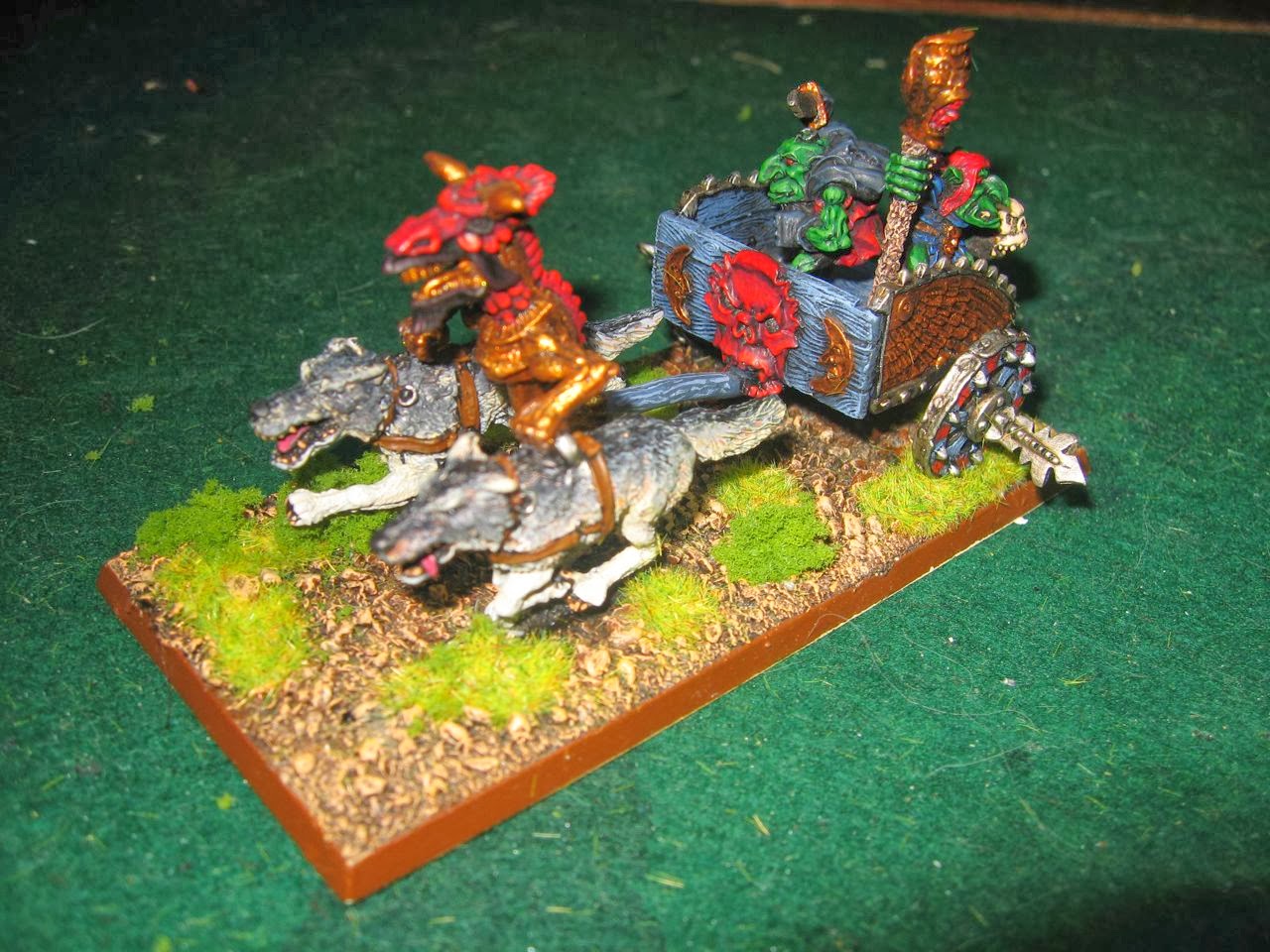 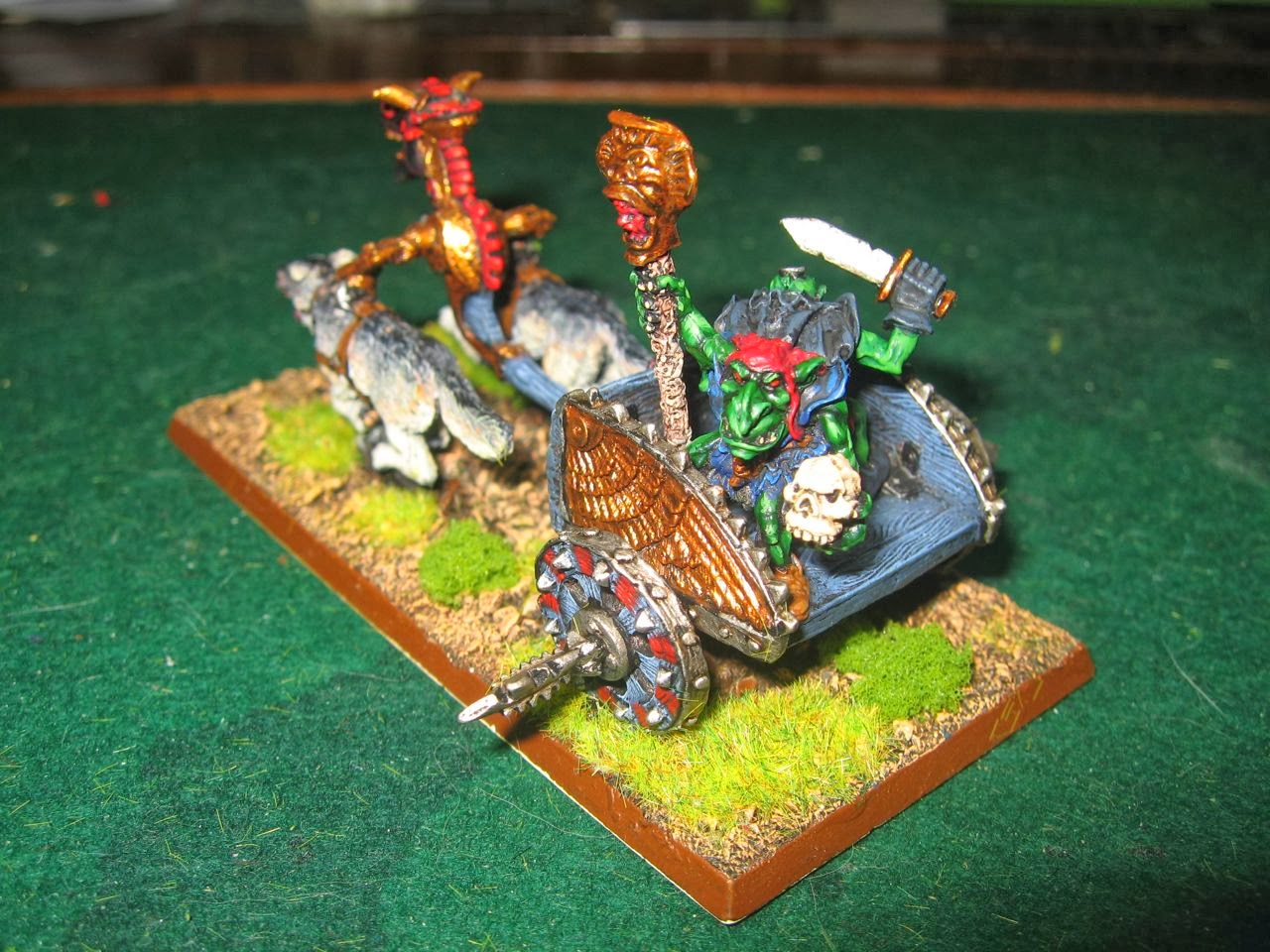 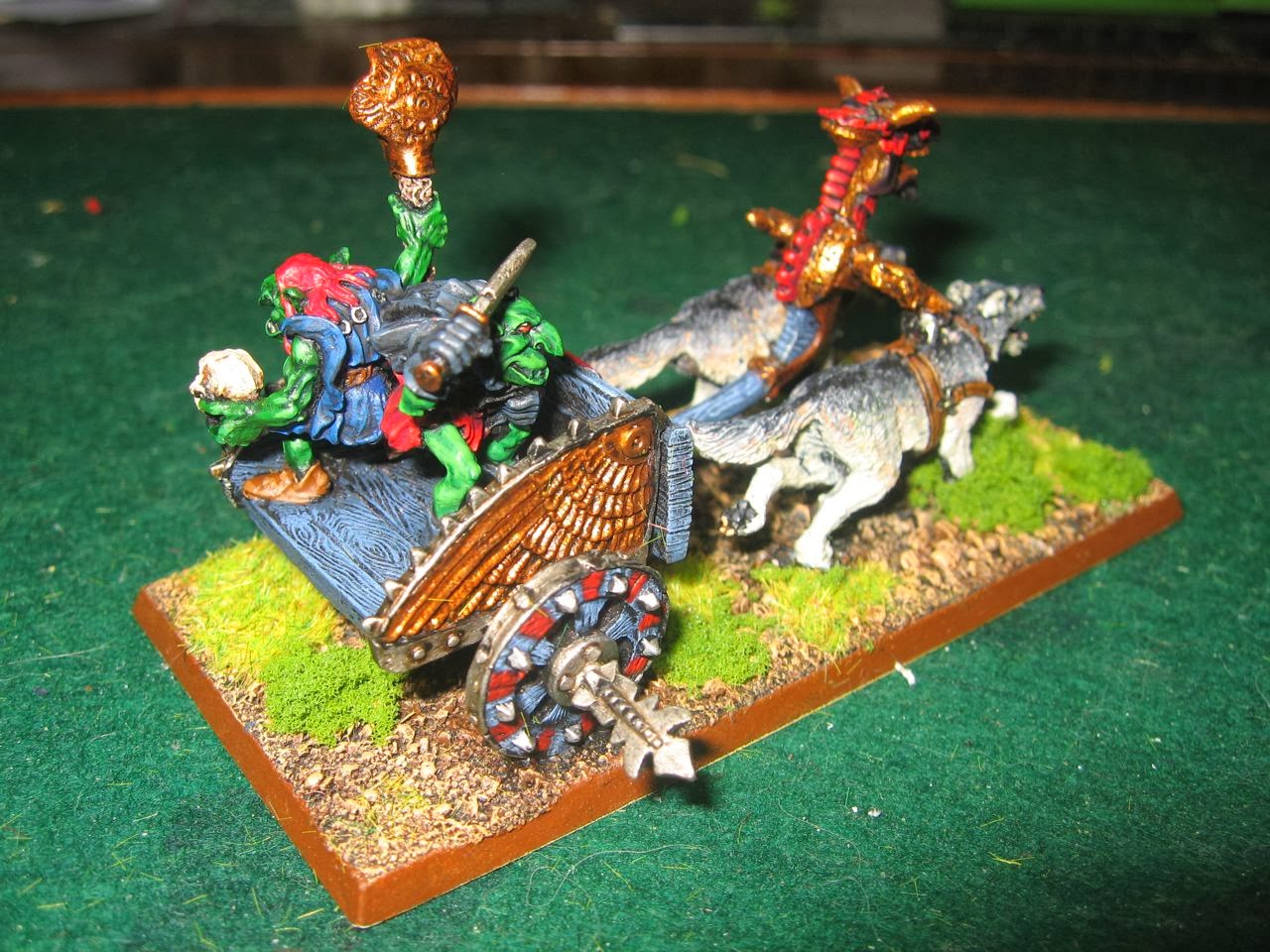 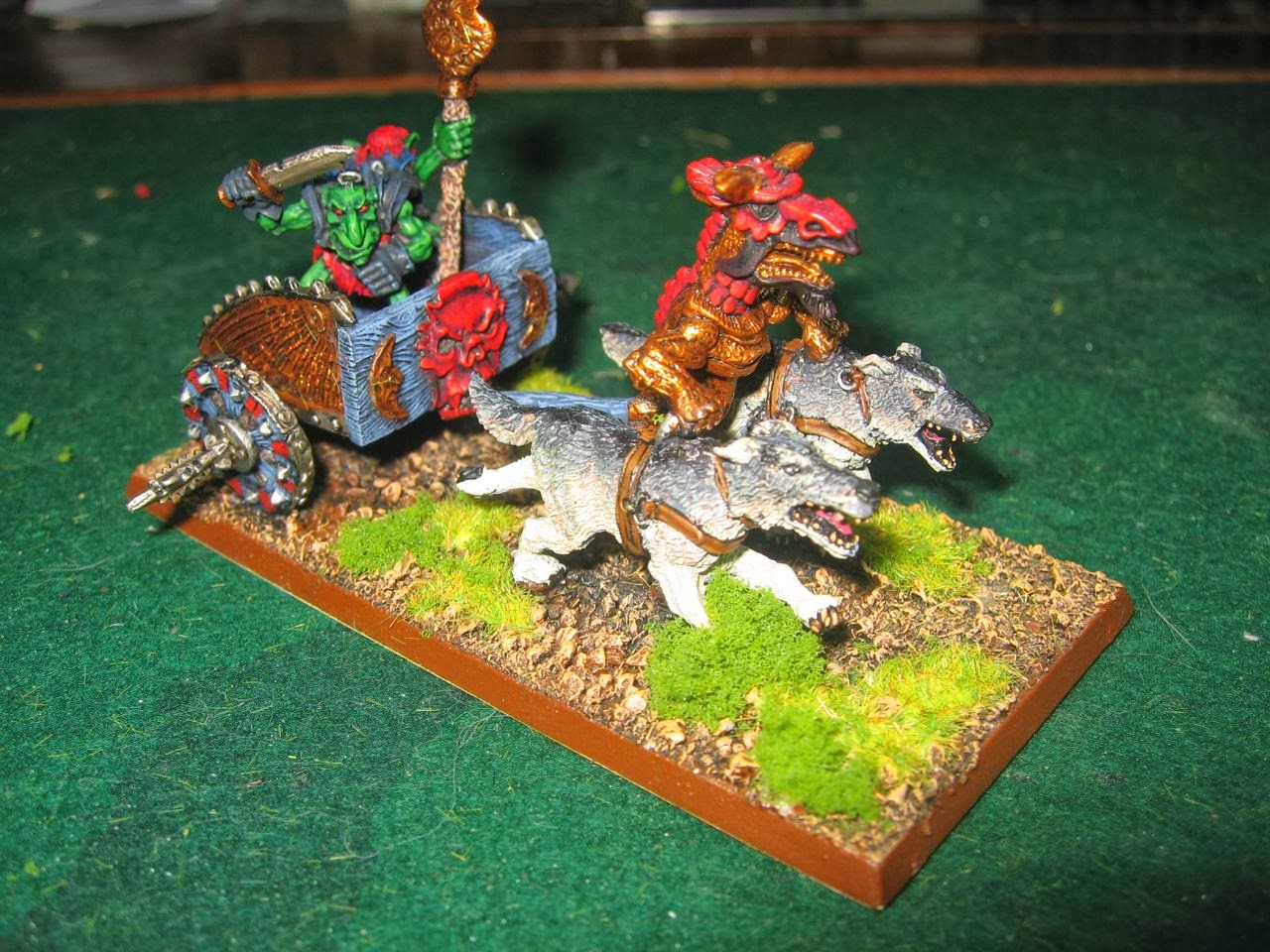 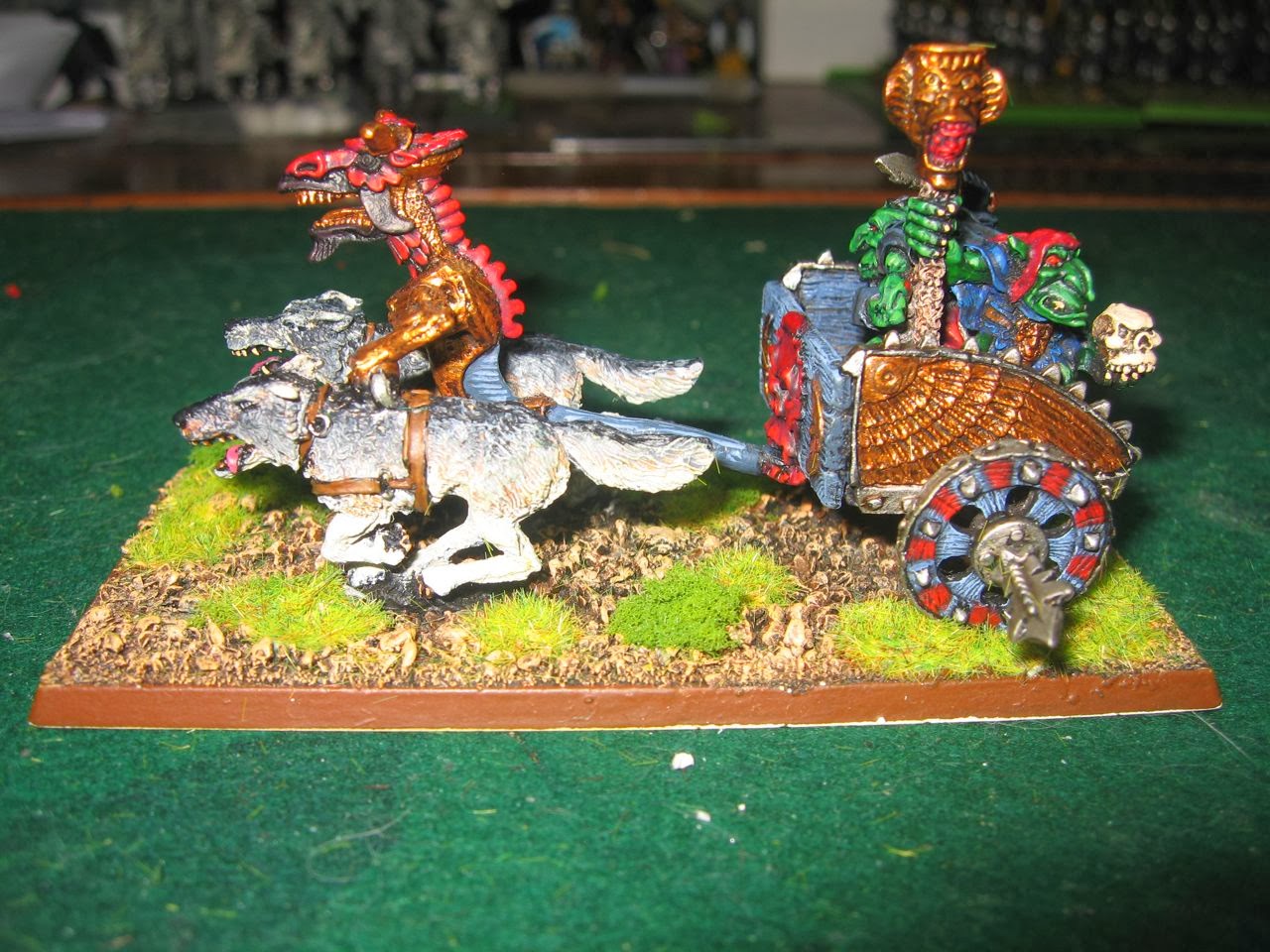 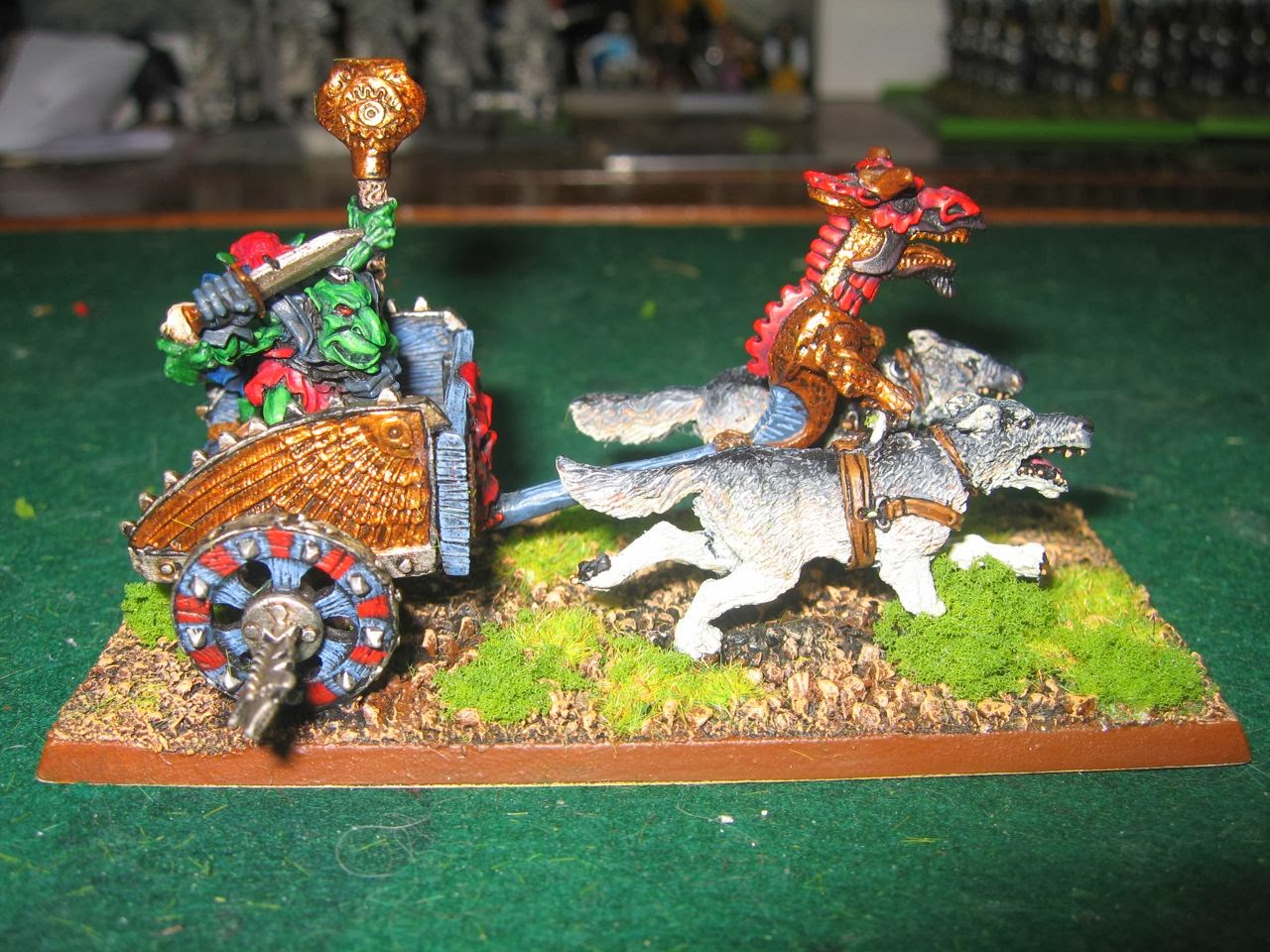 The thing shrieks of compromise and is littered with clumsiness that I just can't bring myself to fix.

Still - we must look for silver linings. Simply put, I have another chariot, which has in it a goblin wizard, and the thing is complete and off the table. Mustn't grumble.

Imagine, if you will, 2014 knocking on the door. Having considered it through the peephole, I've yanked the door open, snatched 2014 by its throat, swung it around and up against the wall, thrust a pistol into its throat, and demanded the nature of its business.

You might say that I got the jump on 2014 - I've painted something.

I thought I'd open 2014 with what is probably now my longest running project - if one includes the procurement of the necessary figures: The Terror of the Lichemaster.

So, in a quiet moment, unnoticed by well wishing family and sugar powered toddlers, I was able to paint four more of them.

The painting quality isn't brilliant. Parenthood has taught me to lower my standards and the nature of my job has taught me that 'good enough to go' is better than 'perfect, but not now'.

I present to you the four eldest in the Bogel family:

When I first read the scenario, I took away the idea that the Bogel family were kind, intelligent, all round 'good' farming family.

As I started working on the family, the same thing kept going through my mind:

Rednecks. Stereotypical, american-movie-style-rednecks. The ones that are most often visited by UFO's and are generally suspicious of marriage outside of their families.

Having now perceived them in this new light, I have found the scenario much, much more interesting - a lonely southern farmstead attacked by zombies, with the blood soaked survivors running back to town to explain to the disbelieving sheriff about the zombies that attacked them...

The curiously named Hunk is anything but. I've not expressly taken a picture of his face, but if you do ever get to look at him closely, he is a astonishingly Hitler-like.

Lorabeth, the wife of Hunk, will also serve as a different character in other games - one you may have met already. Her name is Wanda Reboute, or at least, a human wizard, until I get some other human wizards painted.

Corabell is the only daughter of Hunk and Lorabeth:

John-boy strikes me as the most inbred of the lot. His fish like face and ill-fitting clothes set him quite apart from the other members of his family. I can't help thinking he's one of those bullies who actually relies on his cronies to beat up new comers into town if they respond to his childish mocking.

If my redneck zombie horror interpretation of this scenario plays out correctly, I imagine he'll be one of the last survivors - there to confound any chance the rest have of ever getting to town alive...

There are still two Bogels (well, one and a dog: Willy and Fritzy) and a halfling (Samgaff) to complete, but I'll be getting on to them soon enough.

As always, I have many uses for my figures, and these are no different - when not serving as the actual Bogel family or possibly being objectives in games I've yet to think up, they will serve in the baggage train of the Human army I'm quietly building.