Terror of the Lichemaster. And Sabotage!

Good news - I discovered that I had a celebrity in my model collection. I've always had the chap, but it wasn't until I looked at this post up on the Lead Adventure Forum that I realised I was the proud owner of the original Krell: 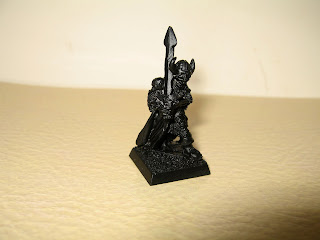 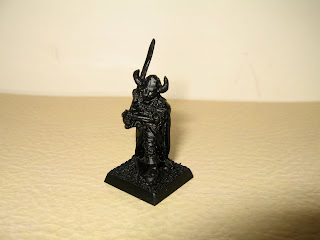 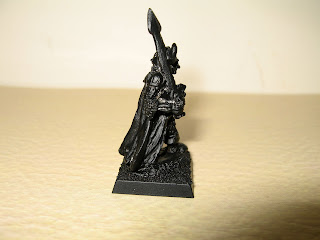 How fortuitous - I just happened to have undercoated him as part of the preparation of my undead army. I was so thrilled with the discovery that I thought I would get to painting him right away.
But then...sabotage! 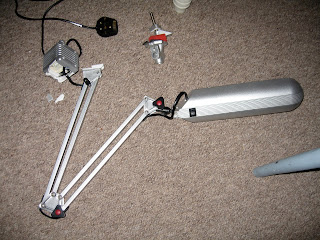 My all important painting light had snapped... 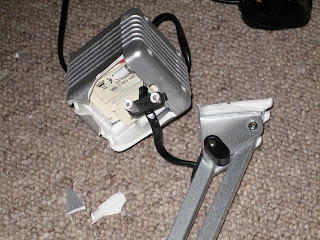 The saboteurs. Acting as if nothing had happened: 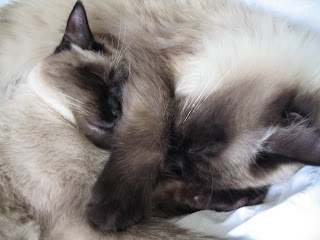 So, the whole thing was scuppered.

But, having been inspired by the approach taken to the Orc's Drift scenario, I can't help feeling I want to do the same thing for Terror of the Lichemaster. I'm busy with an undead army, so it will help with those goals and it should also make for some interesting painting as I try to locate the necessary models (or suitable substitutes). I suppose I need to finish the Nightmare Legion first...
Posted by Weazil the Wise at 14:38 No comments:

Email ThisBlogThis!Share to TwitterShare to FacebookShare to Pinterest
Labels: Sabotage, Terror of the Lichemaster, Undead

Just saw it now and had to link it. Why do you despise us so, GW?
Posted by Weazil the Wise at 12:21 No comments:

The (hopefully, one day) green tide

Another post about doing something other than working on my undead.
I realised that the problem that I have is that I get bored quite quickly when painting, so I need to keep some variety on the painting table, just to keep me interested.
Part of preparing for that variety was the preparation of most of the Orcs & Goblins I've acquired so far: 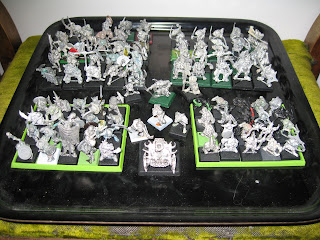 I realise they don't look like much up there, but its taken ages to strip them of their previous coats of paint and repair the incredible amounts of damage on some of these figures. What you're seeing above is the 'staple diet' of the army - lots of orcs & goblins. In Warhammer 3rd edition, what you need is at least 40 orcs (20 Boyz and 20 Arrer Boyz) and 40 goblins (again, 20 Gobbos and 20 Stickas). That's what you see above, together with the mighty Lead Belcher and some characters.
These are the Arrer Boyz: 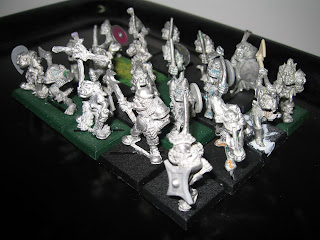 They've largely been seeded by the old Harboth's Orc Archers, and filled in with various other orcs with bows. I don't have a musician for them, yet.

These are the Boyz: 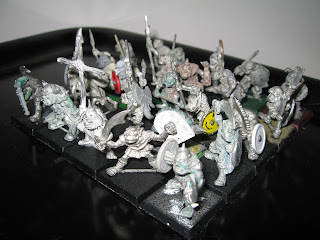 Plenty of repair work had to happen here. You won't be able to see them from this shot, but someone seemed to have pitted some of these chaps against a blow torch - a battle which they ultimately lost, leading to some seriously deformed orcs. The problem with eBay is that you can't make that out in the pictures, unfortunately. Anyway, thanks to a fortuitous auction run by Zhu over The Realms of Zhu, I was able to acquire 7 old plastic orc heads which will allow me to effect some much needed repairs on some of the chaps. Thanks, Mr Zhu! A lot of weapons needed to be replaced and repaired as well - lots of pinning, drilling and filing here. 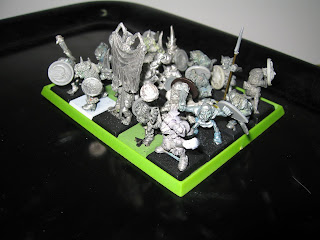 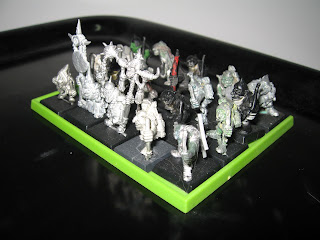 Die-hards will notice right away that some 90's miniatures have crept in there. Let me know if you can find cheap 80's goblins. I'll keep looking, but for now, we'll have to have some interlopers. Goblin musicians are notoriously hard to find, from what I can see. I have some other goblins that haven't made it into the picture - I intend to explore the route of Chaos Goblins at some point, so I have some plans later - these chaps will just be normal goblins. I haven't included the various Groms, as they're all painted and pretty, and shouldn't be shamed by horrible, unpainted figures.

On to the big boys: 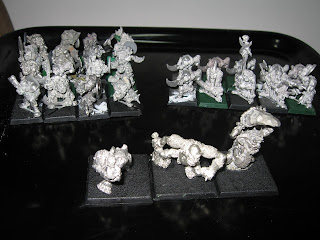 What we have here are 16 Biguns, 10 Black Orcs and 3 beautiful Trolls.

The Biguns are seeded by some of the Mighty Ugezod's Death Commandos and the balance by Bigun figures. I had other official Bigun models, but they are better matches to my Savage Orcs (still to come), so I'll need to find more to round this unit off: 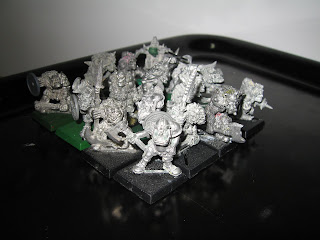 The Black Orcs. The place where this blog basically started: 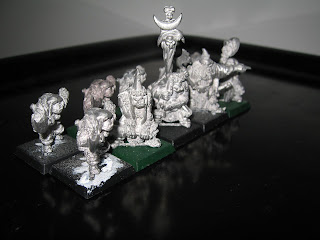 ...that is to say, Eeza Ugezod's Mother Crushers.It feels entirely right that Eeza be the general of the army, so I will most likely use him as a level 20 or 25 Hero.

Also, Trolls. No self respecting Orc army should ever go to war without Trolls: 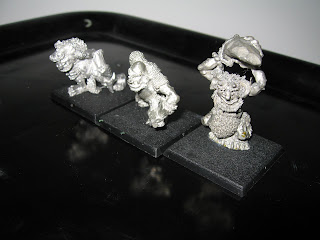 Unfortunately, I only have 3 - a mountain troll, a cave troll and a marsh troll.

Finally, the Lead Belcher and the wizards: 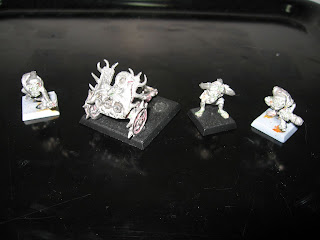 The Lead Belcher model actually comes with 6 crew (although it's a 3 crew gun in 3rd edition), but unfortunately, I wasn't able to acquire the whole crew. I'm also missing the blades on the wheels. None of that matters, though - it's still a Lead Belcher - I'd rather have that than an Arachnarok any day of the week.

The wizards. I'm not altogether sure about this yet. The goblin on the left is actually a standard bearer, but has been used as a wizard in the Warhammer Armies book, so that's a good enough endorsement. The chap in the middle is an orc and will probably end up being a level 20 or so wizard. The interloper on the right is a forest goblin from the 90's and may not make the final cut, now that I've got a suitable savage orc wizard which I've yet to process. 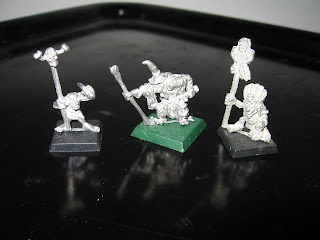 Good. So now I've got a whole bunch of other things that I'm going to struggle to paint. My plan is to continue with the undead, and work on these chaps from time to time. I've worked out a discipline that has allowed me to continue with that project (and I'm making slow, but steady progress), but I've started assembling this army to allow me something to work on when I get bored. It's definitely going to go slow on these chaps, as I know how boring painted hundreds of orcs can be - I've done it many times before...

It remains to say that I still have a whole bunch of Orcs & Goblins still to strip, clean and repair, but their time will come. Up next will be the savage orcs I mentioned earlier (16 at the moment) and classic Snotling Pump Wagon that I've just acquired.

What this means is that I now have two classic Warhammer 3 armies that will one day be able to go head to head, and carry all that lovely old 80's charm that has since evaporated from the hobby. If only I could paint faster. 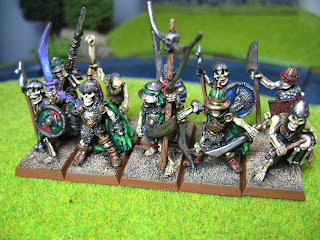 I took a lot longer to paint these than I thought I would. Part of that was my very first punt at OSL: 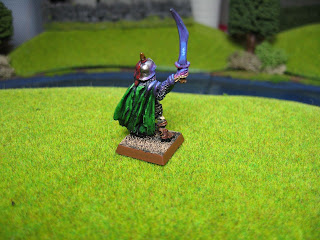 All undead heroes of level 15 or more need to have a magic weapon. I couldn't help but imagine that Ennio must be at least level 20, so it felt right to have a go at a lovely magical glow for his sword. 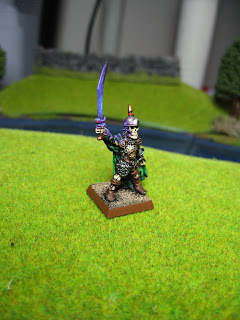 Another shot of the chaps, with flash: 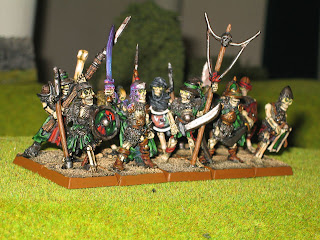 I've still not flocked the bases, so I suppose they are not really complete. The other outstanding task here is to attach some pennants to the standard. I've been hunting around the internet for flat images of the Nightmare Legion banners, but I cant seem to find them. The funny thing is, I might not even want them when I find them, so I might just create some freehand sort of pennants. We'll see.

I realise that different folk have different painting disciplines. For me, my discipline has to be - paint two models (or one big one) at a time. Never more. Once you've finished with those two, chose something completely different, otherwise you will get bored.

The reason it's taken me so bloody long to finish the next 5 undead is because I broke that rule (and the OSL). Having successfully completed the first 5 all in one session, I thought I should easily be able to do the same with the next rank. Instead, the painting became a chore and I did anything I could to avoid it.

So, I shall immediately re-instate my painting discipline, meaning that by the time I have painted 100 figures, I still won't be able to play with any one of my armies, but at least I will have painted 100 figures. At the rate I was going...well. Let's just say that this discipline will help me to have pictures of painted figures, not naked metals.
Posted by Weazil the Wise at 11:33 5 comments: