Battle Report: It's fun to slay at the Wyemm Seeyay - Turn 2

I've now come to realise how much work it is to do battle reports. It's not the writing - it's the making sure which images are where and making sure that you've not misplaced orders and things. I've had to pause halfway through turn 3 just to get my stuff in order...

This was the state of play at the end of turn 1. Nothing exciting happened... 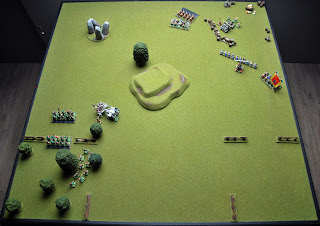 In this case, Ellendee Generes and Spar Gettyand Sors, being highly disciplined individuals who know when they're needed, arrived at the beginning of the turn. 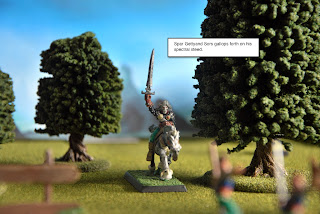 These were the orders for the movement phase: 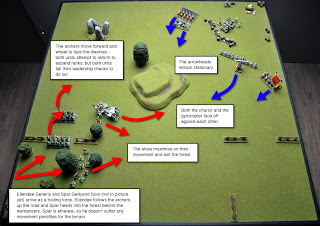 Having just referred to the value of high leadership, I proceeded to prove the point by having both units of archers fail their reform manouevres. The rest of the army kept it simple and just moved onwards. The dwarves also pressed forwards, apart from the Arrowheads, who were preparing to fire.

Danak Royd signaled to Loreal Elvive, the musician, that it was time to reform. He wanted the unit in single rank. Loreal nodded, and trumpeted the instruction, clear notes reverberating off the nearby hill. Immediately, the unit stopped, still marching on the spot, whilst they started forming a single file.

"No, no, NO!" Danak yelled as he watched in horror. "Single RANK, not single FILE! What the hell do you think you're doing!"

"I signaled rank. Rank, man, rank. How hard can it be? There are only two options - rank or file!"


"Listen to me, you-" Someone was tapping on Danak's shoulder. He turned to see the unit looking at him.


"Sorry to interrupt, sir, but what should we do? Did you want rank, or file?"

"Just hang on. Stay where you are. I need to get Loreal's head out of his arse so he can direct the unit properly!"


The whole unit jumped in fright when a rock the size of a sheep slammed into Loreal's head, crushing his whole body inwards and downwards to the floor before shattering. Elves dived in every direction to avoid the razor sharp stones flung from the impact.


There was immediate silence, which bled into dull moaning and the sound of one of the elves fainting.


Danak wiped the dust from his eyes. He looked at the newly fainted elf and heard himself say, "he's dead."

Another elf knelt down next to Radocs, the fallen elf. "Yes, he's dead. Looks like his heart stopped."

Danak raised an eyebrow. "He died of fright? You're saying he got such a shock that he dropped dead? We probably didn't need a ninny of such epic..." He sighed. "It doesn't matter. Look, is anyone else injured or dead? Can we get on with this now?"


They took one last look at Loreal's crushed body.


"You'll never get his head out of his arse now..." someone muttered.

The elves took first blood in the shooting phase, killing one of the elite longbeards in the Firehammers. The dwarf response was swift, bloody, and four times the magnitude. 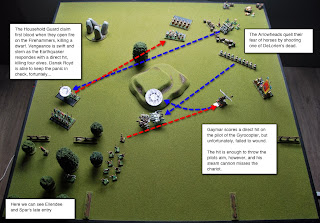 Torin wrestled with the controls of the gyrocopter as it kicked and shuddered. Experience and force of will combined to bring line him up for a run on the chariot. How basic it looked, that ancient machine, with it's horses and standing crew. Torin's flight cap exposed a grim smile as he thought how his modern warmachine - the future of warfare - would lay waste to the archaic warmachines of the foolish elves. He pushed the stick foward, causing the machine to enter a slow dive. Here, his vast experience showed: other pilots closed their eyes when they pulled the trigger - the steam was too much for them - but Torin wanted to watch the elves squeal. It was for this reason that he caught the glint of silver so suddenly and impossibly close to him. His brow furrowed as he leaned forward to get a better view-

-the tip of the arrow glanced off the rim of his goggles, shooting straight up into the rotor where it disintegrated. In that moment, his entire body clenched, including his trigger finger, and he felt the steam cannon erupt beneath him.

"Balls, bullets and buggering badgers!" he yelled, his eyes wide with shock.

His senses returned and he swore violently and viciously as he realised that he had cooked half the hill with his cannon, and none of the elves. He looked around. Just left of the chariot was a lone elf on one knee, shaking his head.

Torin's eyes narrowed. So, he thought, the little elf wants to play...

Gaymar proved to be an excellent shot, landing a hit on the Gyrocopter pilot. Unfortunately, his ammunition proved to be less excellent, as he failed to wound the stout dwarf.

The Arrowheads also managed to kill one of the chariot's horses, costing the chariot 1" on its future movements. 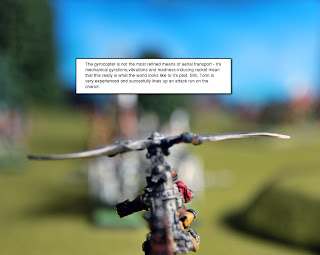 The reserves phase was again very straight forward, with the elves pressing the attack, both eager to engage and desperate to get within the minimum range of that stone thrower. 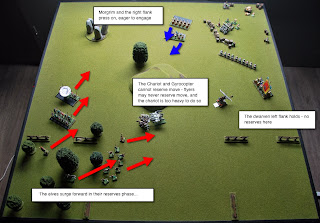 Amongst the reserves, Ellendee drifted up the road and positioned herself in order to launch a fireball at the gyrocopter. Unlike later editions of Warhammer, the magic phase is the last phase of the turn in 3rd edition, so I was able to use her reserve move to bring her closer to the action.

This is a good example of the trust required for a remote game: I had to ask Dreamfish to help with the estimation of range here, because I just couldn't do that without being there. In Warhammer 3rd edition, one still needs to declare actions before measuring (unlike 8th edition), so a feel for ranges is important.

Based on his trusted advice, I decided not to waste the fireball, as we agreed that it didn't feel close enough. 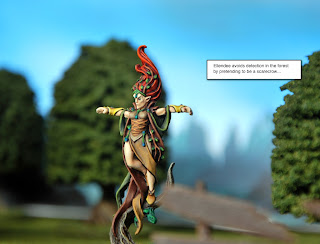 The situation at the end of turn 2: 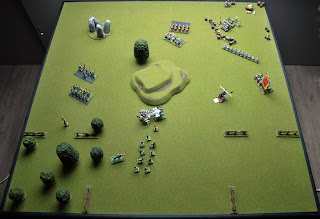