Battle Report: It's fun to slay at the Wyemm Seeyay - Turn 5 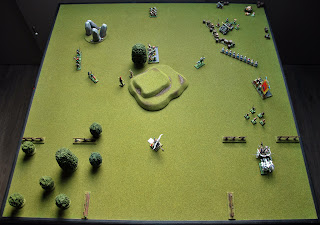 Plenty of movement in the movement phases. The elves manage to execute a planned charge, even as the chariot rumbles off the field.

Spar finally gets to grips with the stone thrower. 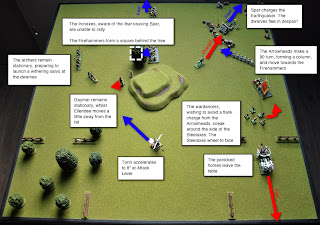 Some dwarves sneak past the abandoned war machine: 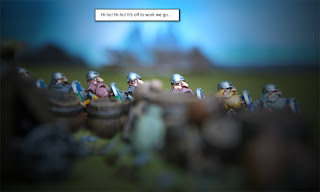 Again, the dwarves out-shoot the elves: 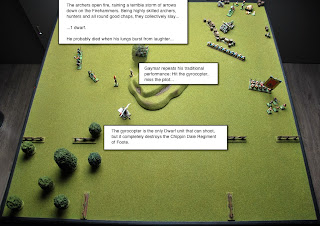 Gaymar was having the time of his life. He had loved reading the adventure books his uncles had given him and his mind had been filled with stories of heroes of old dealing out justice and retribution to all the enemies of the elves. And now he was there. In the action! Even when that infernal flying machine had scorched him from above, he realised just how alive he really felt. And...the steam had left his jerkin tattered, his muscles exposed and gleaming, and his hair wet and wild. He looked like a hero. He looked epic.

He tossed his hair.

It was only in so doing that he came to witness the demise of the Chippin Dale Regiment of Foote, behind him. Where before ten brave elves had followed him unquestionably into battle, there now only stood three bedraggled warriors and a string of broken, moaning casualties spread out behind them.

Gaymar knew how fate worked. It happened like this in all the stories he read. Entire regiments were decimated by dragons and sorcerers, leaving only the toughest fighters and their brave commanders. In this case, he reasoned that he must be the brave commander, although he did note with irritation that Jorj Miy Kael was still alive. Maybe that's so he can leap in front of an arrow or something and save my life, Gaymar thought.

Anyway, he knew fate. And fate was telling him he would win the fight with the Chippin Dales. He knew at that point he needed to join with them and lead them in a dazzling display of bravery and cheek - he must lead them directly against the approaching dwarves.

Hair tossing complete, he turned to face them and was about to shout to them when he saw them completely engulfed in torrent of boiling hot water and steam. Even as far as he was, he felt the violent heat of steam cannon.

Brilliant, he thought, as he savoured the feeling of his hair whipping in the wind. I'm totally epic!

He waited for the steam to dissipate, expecting to see the vehicle of his victory standing firm and cheering for him. What he saw was three screaming elves rolling around on the floor. Jorj Miy Kael had gone from a suitable lieutenant to the worst hair disaster this side of the Forest of Loren.

He gripped the pommel of his sword and in one fluid movement, hoisted the blade high above his head. He hoped the others were watching, so that his moment of greatness would be remembered for ever. It was only when the sword was above his head that he heard the traditional schwing of the blade being drawn from the scabbard.

Hang on, his subconscious said. The schwing normally comes before the blade goes overhead. Doesn't it?

Yes, his subconscious replied to itself. Schwing, then up. Not up, then schwing. Definitely not that way around.

Gaymar's keen eyes spotted an object descending in the distance. His heart dropped. Oh no. Oh no, no, no, no. She would never let him live this one down.

He winced. Too late. 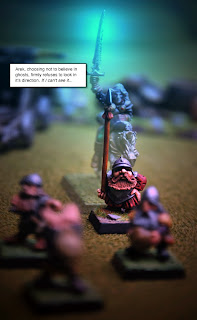 Spar is a bound spirit host. Storm of Magic (for Warhammer 8th edition) is the first time since 3rd edition that GW have even contemplated this sort of thing - another bit of evidence indicating the true source of inspiration for WFB8.

In Warhammer 3rd edition, hosts (being Spirit, Monstrous or Chaotic) can be bound into service if there is a wizard to do so. Although the full points cost is payed for the host, the wizard also needs to spend magic points in order to bind the host. In this case, I could only afford to spend 5 points in the binding. That means that once Spar has finished this engagement (as he did at the end of the combat phase), he will simply 'blip' out of existence.

In the reserves phase, both sides prepare for the 'end-game'. Warhammer 3rd edition doesn't have a turn limit like the later editions, but in this case, it really appears that turn 6 is the one that will decide the outcome. 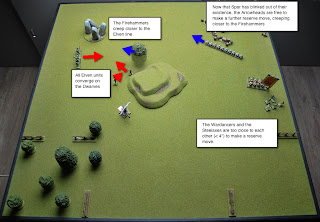 Ellendee was embarrassed. She should have been able to manage the damned flying machine and she had messed her spells up twice now. She was glad her tutors were nowhere near to watch her crumble like this. Granted, it was her first battlefield experience, and she didn't really know many dangerous spells, but she was sure she could do better than this.

Checking to make sure no one was looking, she quickly drew a small book from her robes. This was her spell book. She had been desperately hoping she could do the thing from memory, but fireball was a difficult spell. She quickly paged through, flipping to the 'F' section.


Seeing it on paper brought it all back to her. She slapped her forehead. Of course! How could she be so stupid?


She looked up at the gyrocopter. Her eyes narrowed as she chanted in the language of the wytch. Her hands weaved this way and that, drawing impossible signs on an unseen page. She contracted with nature and the elements and allowed their combined grace to flow through her veins. It's coming, she thought. It's coming.

At the moment when she thought she could hold it no longer, she launched a fireball.


At exactly the same time, the steel tip of the bejeweled scabbard of Gaymar the Foccer descended from the heavens and bounced off her head.

Her eyes rolled up as she fell backwards.


This event left three things floating in the air: a scabbard, a spellbook, and a fireball.


The scabbard, having bounced directly up, dropped down again onto Ellendee's stomach. Her eyes jerked open as she grunted in surprise. This gave her just enough time to see the spellbook, travelling upwards, meet the fireball, travelling downwards. A properly cast fireball will explode on impact, but it came as no consolation to Ellendee that her's was a properly cast fireball. It exploded exactly as it ought to.

She watched in horror as her spellbook disintegrated in a rain of ash and cinder. She grabbed the object lying across her stomach and, still lying on her back, brought it into her field of vision to identify.

I. Am. Going. To. Kill. Him. She rolled onto her stomach and slowly regarded her cousin. The simpering idiot was waving at her. I am absolutely going to castrate that retard, if it's the last thing I ever do on this earth...

One of the most disappointing elements of this game (for me) has been the complete absence of magic. Although the story suggests the fault lies with Gaymar, in rules terms, the silly cow failed her intelligence test for the third time in a row. She needs to roll 10 or less on 2d6. Three times she's duffed that now! She has now consumed 3 magic points in her attempts, and only has 2 magic points left. Surely, surely, surely, she'll be able to get a spell off in turn 6?!?

I was really hoping to demonstrate how simple the magic phase really is and what a game might look like without the uncontrolled, top-heavy magic of Warhammer 8th edition.

The dwarves and the elves prepare to engage: 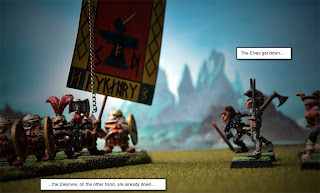 This is the situation at the end of turn 5: 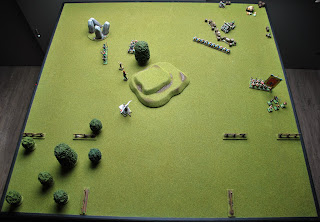