Whilst we wait for the conclusion of the first turn of the Battle of Koles Lorr (yes, it's underway!), I thought I would regale you all with some painting progress.

So, Chaos Dwarves. Everyone loves 'em.

What we have here is eight of the little fellers, which just happens to be the smallest Chaos Dwarf unit one can take in a Realms of Chaos army of Khorne: 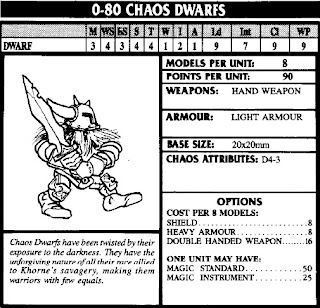 Of course, if I'd painted two more, then they would be the smallest unit available through the Chaos Allies contingent. I've got more, but I started getting bored of the painting. It feels like six figures for a particular unit is the right level for me before I need to change. So, I'll probably move back to some Undead (for whom this ally contingent is ultimately aimed at) before completing this unit.

Anyway, these are they: 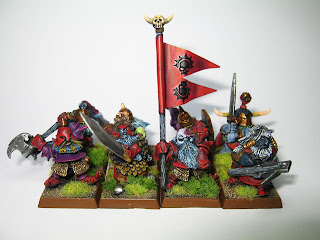 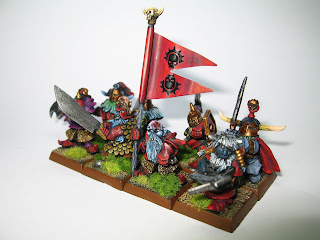 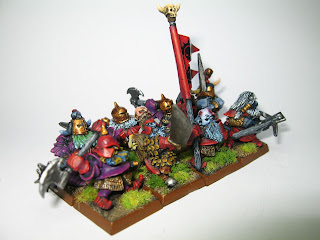 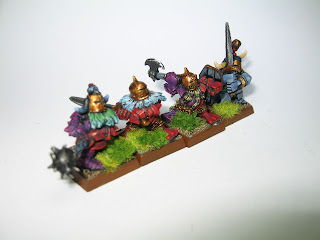 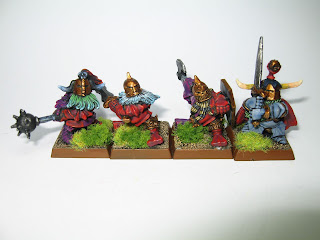 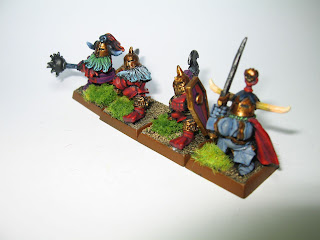 As you should be able to see, they are equipped with heavy armour and two handed weapons, meaning they will contribute 124 (116 +8 for the banner) points to my fledgling Realms of Chaos army that I guess I've just started.

Now the interesting thing is that I wasn't really aiming to make them Dwarves of Khorne. I just like red.  I'm just lucky that I've only painted eight, and that happens to work in a particular army list. Also, by way of further coincidence, I have another eight chaos dwarves, a bazuka, and a tenderiser. All coming soon*.

*Rounded up to the next thousand years