Its been a while since I posted last. If you're like me, perhaps by this point you'd be thinking, "well, its been a little while now. Either he's dead, or he's ignoring me." Doubt would set in, and you would start to wonder if I was no longer interested. Perhaps you'd describe the situation to your friends or family. Certainly, the ones that never liked me in the first place would immediately recommend that you go and find another blog to read - one that cares about you enough to post on a regular basis. Other, more understanding friends would suggest that you should just give me some time to explain myself. They might hint that you should keep an eye on the market, however. Just in case a wealther, more handsome blog came along. You never know. Either way, one thing might lead to another and before we knew it, you'd be reading other blogs, and our special relationship will be over.

So, let me explain myself: The delay has been to do with my wife. I have been very concerned for her health over the past few months. Certainly, over the past six or seven months, I've watched with consternation at her inexplicable and constant weight gain. Having learned manners in a typically English fashion, I know better than to ask a lady about her age or her weight. I decided to apply the stiff-upper-lip technique. Say nothing, give her some time and no doubt she would pull through, sort herself out and stop eating so much. But the weight never stopped coming. Eventually, seeing that the stiff-upper-lip technique was adding no value, I decided to broach the topic:

"Honey, dear," I started one day. "I'm a little concerned about ... well, you know..." I looked pointedly at her belly a this stage.

She raised an eyebrow, daring me to continue. I should have detected the danger then, but I forged ahead:

"I'm a little concerned about the, er...puppy fat that you seem to picking up."

Well! Allow me to confirm that hell, indeed, hath no fury such as a woman scorned.

After the medics had left and the police agreed that no charges were necessary, my wife explained to me that she was suffering from a condition known as pregnancy.

Now I am an educated man. I am familiar with the constellations and the movements of astral bodies. I keep a keen eye on all matters religious, political and financial. And my experience did not fail me, for I have heard of, and come across, this condition before. Having met other people suffering from pregnancy, I knew that the condition almost always resolves itself and that the victim will most likely recover their shape and good humour, going on to live a normal and healthy life.

My relief was palpable. I apologised to my wife for my earlier lack of sensitivity, and commented on how I knew that it would all soon be over - that she need not suffer for much longer.

It was at this junction that she casually introduced the notion that this episode of pregnancy would culminate in the production of a baby, and that I should prepare accordingly.

Having already mentioned my education and life experience, I realised this was utter poppycock. Pure superstition! I remarked that pregnancy had nothing to do with childbirth, that childbirth was scientific nonsense and that when we had discussed an heir to my kingdom and future scion to my gaming wisdom, the child would be delivered by stork. I even remember describing what sort of child we should look for: capable of captaining a rugby team (at least at county level), likely to earn a doctorate, future winner of a Nobel prize and a regular participant in the space programme. I presumed these were all options in the catalogue?

I trust that you are sitting down when I say this: it turns out that scientific opinion is now against me! Apparently, the vast majority of mankind now believe that pregnancy is merely a symptom of the gestation period that occurs when a woman is with child. This child grows from some atomic particle or other into a fully formed little person within the belly of the afflicted lady, until the time is judged right to deliver said baby between the bones of the pelvis.

I'll believe it when I see it, is all I can say. 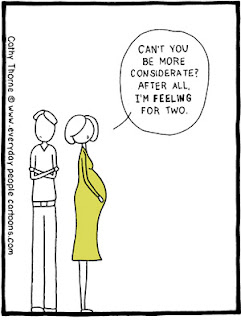 So anyway, the considerable delays to the updates on this blog have been mainly down to preparation of this new family member. I have cleaned, polished, sterilised, vacuumed, assembled, disassembled, painted, stuck, clicked and fitted a whole array of fascinating baby paraphernalia to the room in which the child will live and the various items required to support it.

It is this activity that has interrupted the otherwise smooth flow of battle report turns, painting and general bitching about the state of Warhammer today.

As a warning, it is right for me to say that the baby is due (apparently - I don't trust these sciencey - doctorey people one bit at the moment!) sometime in April, which I imagine might introduce further constraint on my time. As always, I am dedicated to the business of this blog, and as soon as I've managed to bundle the little tyke off to military school, everything will return to normal.

Stiff upper lip, chaps!
Posted by Weazil the Wise at 09:24

Email ThisBlogThis!Share to TwitterShare to FacebookShare to Pinterest
Labels: Sabotage