Battle Report: The Bridge Over the River Chai - Turn 4

Thantsants and Airbornegrove, driven insane by your urgent cries for more blood, rampage through the fourth turn, causing death and mayhem in every phase. The body count rises, with the most casualties of the game so far.

Finally, finally, finally - the mystic mist evaporates. The war machine battery shake their heads in sorrow as they perceive with their own eyes the cause - and the effect - of the explosion last turn.

The Wood Elves, having lost their leader to the cold blooded Dark Elf captain, flee in despair as he turns his attention and the attention of his fearsome and odorous cold one to them. Saved from certain death, Seaman Sprayes avenges his fallen comrades, instantly killing four of the elves through free hacks.

Over on the other flank, Meedy Ochre lurches from the forest, much to the horror of the orc left (yes, yes, the left as seen from Thantsants' point of view - its still on your right, dear reader). The giant bawls in the general direction of Kalpol and his boys before lumbering straight into them!

Also, unable to contain his curiousity, Wineghum, thinking as ever only in the short term, determines that it is safe to violate Rogaine's trust (seeing as how he's running away and all) and discovers the Percolator in chest that was passed to him... 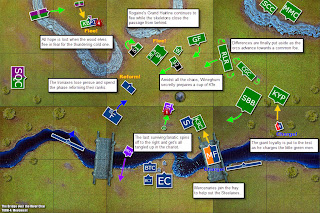 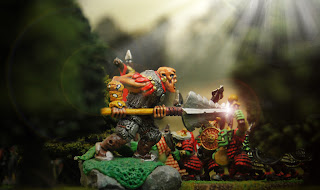 Gaversconne watched as Rogaine chased his boar boys across the field. "Come back, ya bastards!" he yelled as he went by.

"See? Ain't worth it," Gaversconne snorted. "Won't catch me runnin' off like that! That's wot you get fer followin' a leader with only one ball!"

Miigrayne squinted as he followed Gaversonne's gaze. "Only one ball?"

Gaversconne's eyes bulged as he realised that wasn't a widely distributed piece of information in Rogaine's army. Assuming Rogaine came back and discovered this little ...lapse... in Gaversconne's judgement, he'd be bloody fuming. And whilst it was all good fun to rag Rogaine in public and generally try to get in a scrap with the other orcs, getting into a one-on-one fight with the pyschopathic chieftan was another matter altogether. Had he just precipitated his own challenge to be chief?

"Apparently so," another replied.

"How so?" Miigrayne asked.

"Well," said the third wise orc, "A feller's gotta have two balls to ride a boar, see? One on each side." He raised his hands and cradled to imaginary testes to display the point.

"Or no balls at all, maybe?" queried a sixth.

"Or that, yeah." Number two again.

Number three nodded. "Or none, yeah. Just as easy to balance. But not one. Can't balance on a boar with one ball, see?"

"So we're sayin' he's got two balls or no balls, right?" Number seven was keen to clarify the point.

"Well - Gaversconne sez he's just got the one." Miigrayne said. The unit had stopped moving by now.

"Not possible. Two or none. You can tell by-"

Gaversconne grabbed number three by his neck before ramming his fist into the unsuspecting orcs face. "Will you lot listen to yourselves? Since when've orcs discussed each others nutsacks! SHUT UP ABOUT ROGAINE'S BALLS AND GET ON WITH IT!"

The orcs looked at each other as they started marching again.

Finally able to see, the dwarf artillery company successfully kill one skeleton. Well - knock it over, or whatever one does to the undead that makes them just regular dead.

The orcs offer similarly dismal shooting, leading to an uninspired and quiet phase. 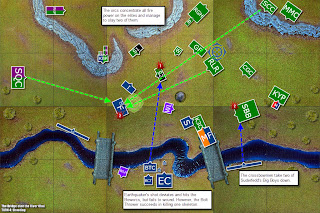 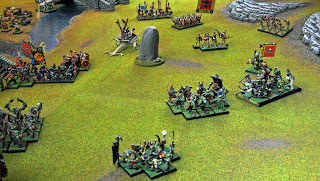 There's not much to say about the Wood Elves. Having routed from the fear of the Cold One, they are hacked down by the joint efforts of Master B'tor and Seaman Sprayes. This act completes the Dark Elf domination of the north-west quadrant and also removes the last Wood Elf from the table.

Unsurprisingly, Meedy Ochre pounds the orcs into the floor, crushing Kalpol first and then moving onto his standard bearer. Unable to do anything against him, the unit routs, only to be torn apart as the giant mauls the fleeing orcs. Both the Big 'Uns (Suderfed's Big Boys Brigade) and the little 'uns (Chamallow's Goblin Command) express huge amounts of empathy towards Kalpol and his boys, by turning and running as fast as they can away from blood spattered monster.

Surprisingly, the now leaderless Kibarkid's 3rd Company of Fine Spear win combat against the dwarves again - pushing them further back and routing Nico and his mercenary archers in the process!

MO vs KYP
Round 1 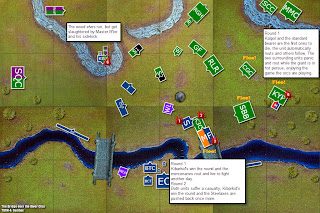 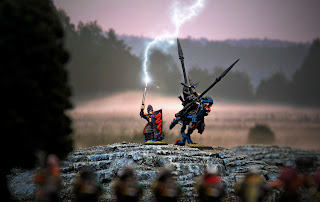 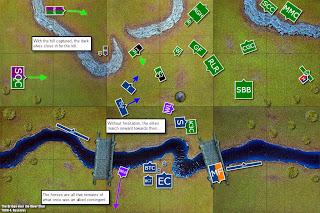 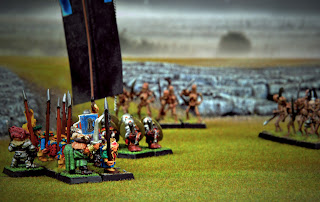 Wineghum, having spent the turn working our how the Percolator works, lazily places another Mystic Mist over the dwarven artillery battery. Content, he returns to the little fire as he watches the thing bubble away cheerfully.

The Firehammers respond by wrathfully claiming two orcs with their fireball hurling banner. 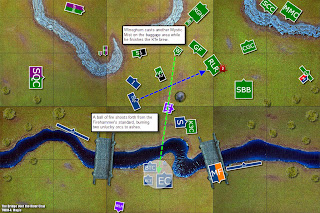 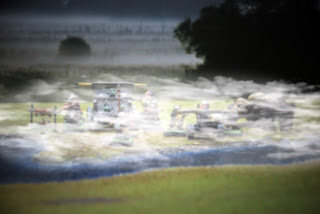 Wineghum had struggled to read the magical symbols describing the use of the Percolator. He had correctly guessed how to grind the beans, but now that he had made the fire and positioned the Percolator correctly, he was at a loss as to how to mix the final part of the K'fe potion.

He was fairly certain that the little bags labelled 'Sugar' had to be part of the final mix, but looking at the pictures, he wasn't too sure what the right measurement was. Everything was linked to the spoon, but the formula proposed by the symbols just didn't make sense.

His brow furrowed as he scrutinised the instructions again:

It just didn't make sense. The milk thing was weird too - the sigils seemed to propose that one could have the milk in some sort of frothy state - quite how one got it that way was beyond him, though.

He'd have to make a decision, though. The Percolator had filled up the little silver cup it came with. Lazy steam drifted over to Wineghum. It smelt good. But he knew from stories of other shaman that a half prepared potion could be the death of one.

He looked up, scanning the horizon for Rogaine. "Ah, shit. He's stopped running away. We'd better get this show on the road, then," he said to himself aloud.

Tearing open a sugar bag, he poured about half of it into the cup. He put the spoon in, just as the sigils suggested, before taking an experimental swig.

"Gah!" he cried, rubbing his eye. The stuff was bitter - not nearly as good as the smell suggested it would be. Also - he felt no different. something must be wrong. Understanding dawned on him - the spoon was part of the magic. it had slipped when it hit his eye, no doubt breaking the spell.

Wineghum turned to look in Rogaine's direction. One more try. What he needed was a way to keep the spoon in place. Clearly it was supposed to touch ones eye - that much was obvious. But how did one keep it in place? He looked at the instructions again.

That's it! The sugar! Perhaps, if one put enough sugar in, one could sort of wedge the spoon into it, thus holding it into place. He consulted the mystical formula again:

It was hard to imagine a happy face with a spoon poking into one's eyeball, but sometimes magic was painful. No pain, no gain, as he had been lead to understand. He took a fistful of the little sugar bags, tore them all open and kept pouring sugar into the silver cup until he saw it form a pile above the K'fe level in the cup.

Carefully, he inserted the spoon in the sugar pile, just so, before taking another drink. He was careful to make sure the spoon lined up nicely with his eye. Here goes...

"Gah!" he cried, his eyes watering. The sticky mess crawled down his gullet at a snails pace. What a flavour! "Gah! That's the stuff!"

Finally, having strategically repositioned themselves on the safe side of two units of skeletons, Wineghum and Gaversconne's Fireguts, Rogaine gains control of his Grand Hareline and brings them to order. 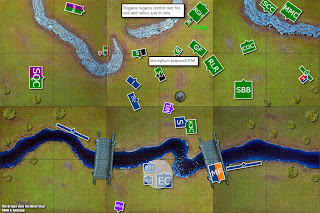 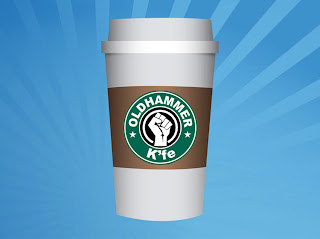 "Hold on," Damasius said to the other Magi. "I'll go and ask them."

Gaspar frowned. "I dunno. They look kinda busy. We should just get going."

"Get going where? We're lost, remember?"

Melchior stepped forward. "Gaspar's right. I mean, I don't know, but my experienced eyes tell me that there is a fight going on down there, and I don't think those are the nice ladies you think they are. It's the swords, really. And the blood around their mouths. Just a hunch. We should just get outta here."

"What is with you guys?" flashed Damasius. "How come we never ask directions? Its easy to follow the star at night, but its not night time now, is it!"

"Hey!" Belthasar barked, moving between Damasius and Melchior. "This is the first time we've ever travelled together! Never seems a little thick, don't you think?"

Melchior folded his arms and glared at Damasius. "Yeah! A little thick, methinks!"

"You know what? I don't have to take this! You lot are fine to go wondering around in circles. I'm gonna go and ask them!"

Gaspar, Melchior and Belthasar watched as Damasius stomped off in the direction of the Witch Elves. He hesitated, before stopping and turning around.

"No. But could you hold this?" Damasius gave Belthasar the little chest he was carrying. "I'll be right back."

The other two Magi crowded around Belthasar as Damasius walked off. "Go on - open it. Let's see what he's bringing!"

Belthasar shook his head. "He's just over there, for crying in a bucket! I don't even know what you guys are bringing!"

"Really?" Belthasar frowned at the little chest he was holding. "Gold? I didn't know it was quite so... important. I've was bringing Travel Scrabble."

Just then they heard Damasius scream. Looking up, they watched as the demented witch elves surrounded him.

Gaspar winced as he watched. "I didn't know that could... come off."

Melchior recoiled as he watched. "They're very good at chopping, aren't they?"

Belthasar flinched as he watched. "Elbows shouldn't... bend that way, should they?"

The three men watched until Damasius had stopped screeching and wailing.

"Well. Now there's just three of us. Travel Scrabble? Seriously?" Melchoir clipped Belthasar on the back of his head. "Do us a favour and take whatever Damasius was taking. What'll they think of us?"

Rubbing his head, Belthasar opened the chest. "Oooh. It's Myrrh!"

"That'll do," Gaspar snapped.  "Take that and leave your stupid scrabble here."

Belthasar nodded. "Fine, I'll take the Myrrh. But I'm not leaving the scrabble."

The other two watched as Belthasar made his way back to his camel. Melchior leaned over and whispered to Gaspar. "What's Myrrh?"

Gaspar pulled a face and shrugged. "I dunno...but its gotta be better than scrabble, right?"