Battle Report: The Bridge Over the River Chai - Turn 9

We grind on. Things are much more... focused now. We know there are other orcs and dwarves and elves and whatnot. But we cast our casual gaze to the middle of the field, where, as fate would have it, all the stars of the show have conglomerated within 12" of each other.

Is that the subtle giggle of destiny I hear?

The Steelaxes, having been stung by the goblins earlier in the fight, prepare themselves for vengeance and charge Rogaine and his remaining boar boys. Wineghum, not normally one to launch into combat, succumbs to his firm hatred of dwarves and their like, and goads his giant spider into a clumsy flank charge. Fortunately for the dwarves, they pass their panic test. 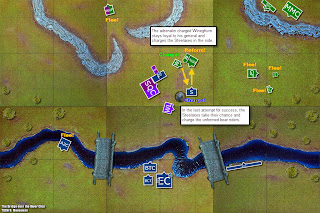 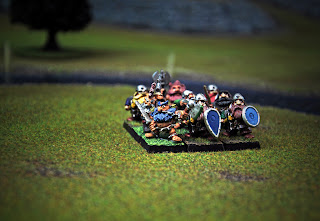 So it seems that there was some confusion just before the combat started. Too late did Dreamfish realise that the Firehammers, being +4 shock elites, actually have two attacks. I see your raised eyebrow. You clearly have an appreciation for the fact that bigger numbers are better than smaller numbers, but because of the lateness of this post, you're not entirely sure what the impact of this is on the game right now. Am I right?

In turn 8, the dwarves were actually pushed back by the dark elves. Dreamfish looked at this situation and realised that the dwarves would most likely have pushed the dark elves around, not the other way. This was also evidenced in the first round of combat - the dark elves managed to draw the combat. Now one can't go around battlefields crying over spilt milk - that sort of thing is just not done. But, compensation was required, so Dreamfish processed an extra set of attacks for the dwarves, which meant they were just able to overcome the dark elves, causing them to be pushed back (and followed up by the dwarves).

Dreamfish then granted Morgrim the right to step out of that follow up, so that he could remain in the epic challenge with Master B'tor, which, frankly is the thing we're really interested in. This is the sort of thing games-masters can do - they can change rules for the good of the game. You really should look into getting one.

So, the final state of affairs for the dark elves was that they were pushed back by the dwarves, leading to them being completely annihilated as they fled whilst their two leaders continued to express their feelings for each other through the medium of swordplay.

Not far from these two, Rogaine and his lads meet the charge from the Steelaxes. Ensconced within that fine body of dwarves is the young Borri Forkbeard, who issues a challenge to Rogaine.

Rogaine, as you may have noticed from earlier turns, struggles with anger management issues. He happily accepts the challenge before cleaving Borri in two with his wicked blade. The other dwarves and orcs acquit themselves suitably, but in the end, the remaining boar riders are all slain. Despite this, dwarves are also killed, leading to Rogaine and Wineghum getting a free hack when the dwarves rout. Unfortunately (if you're supporting the dwarves, otherwise please use the term 'fortunately'), that is enough to 'retire' the Steelaxes from active duty. 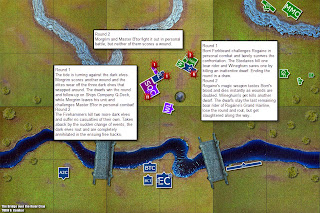 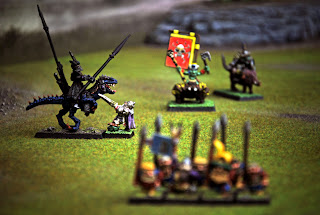 Morgrim nodded to his captain as they exchanged glances.

"You go after them, I'll deal with him," he shouted, pointing at the dark elf general.

Both he and the elf had become separated from their units during the encounter. The elf closed in again, seemingly indifferent to the cries of his elves being cut down as they fled from the Firehammers. Morgrim trusted his dwarves not to interfere in their fight now - it was a personal challenge.

Sparks flew as the elf's blade clattered off his own. Parry. Parry. Mind the lizard. Swing. Sneaky thrust? Ah, no luck there. Parry again.

The elf was proving hard to pin down. The lizard held most of Morgrim's attention - he kept letting the creature bite his armour in order to get an opportunity at the elf, but he just couldn't turn those opportunities into successful blows.

Master B'tor was having as much trouble trying to hit the dwarf. His raging lizard was barely under control now. Every time an opportunity to strike presented itself, the blasted creature was in the way, ineffectually savaging at the dwarf like an excited dog with a bone. But there was nothing for it - he couldn't dismount now and besides - he didn't have the time. The damned dwarves had routed his crew and would no doubt be closing in on him. He needed to kill this dwarf and he needed to do it quickly.

"Out the way, retard!" he barked, thumping the neck of his mount with the pommel of his sword.

The Arrowheads, finding themselves cold, wet and hungry, but ultimately safe on the south of the river, relax and rally. 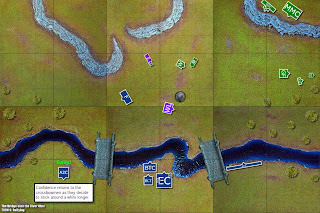 Rogaine looked down at his challenger. A wounded boar thrashed and squealed, its lifeless rider  jerking like a broken marionette against the other dead.

The dwarf was still breathing, but Rogaine could see there was no pain. This was a curious dwarf - his beard had been dyed blue. In this case, the dwarf had not been a worthy adversary, so he warranted no eye contact or special treatment.

He can die by himself.

Surveying the battlefield, the orc general could see the battle was all but over. The dwarves still held a nominal line along the south bank of the river, but they were too far away to be of consequence now. They didn't appear to be mobilising, which suggested they also realised the show was over.

Rogaine tugged on the rein, bringing the boar to face the two last combatants. A bloody dwarf versus a bloody elf. Although, technically, he was working for the elf, he had not been impressed with the performance of the elven force.

If your boys don't perform, its your fault, not theirs.

And they hadn't performed. He watched as the dwarf commander's bodyguard formed up again, having confirmed that all the elves they had overrun were dead.

Of course, he'd have to accept that his boys hadn't performed well either, but he had plans to remedy that. Because that would be my fault. Any of the orcs that hadn't been killed were in line for a serious arse kicking that night. So many orcs had run away that he wasn't sure if he was at a battle or a marathon.

The groan of an orc came to his ears. He looked around and saw one of his boar boys struggling to get up. A quick lash of his cruel scimitar separated the orcs head from his body.

"That's for running away earlier. Don't do it again."

Looking back at the lone combatants, Rogaine made a decision.

What the hell. I'll just kill both of them.