Given that I've not yet completed the write up for Bridge Over the River Chai yet, it would be wholly inappropriate for me to craft a similar level of narrative and output for this fight (out of respect to the others involved). I would dearly love to, but I must also acknowledge that the thing that has stopped me from completing that story would most likely stop me from completing this one: lack of time.

So please forgive me if the narrative is a bit more mechanical this time around - I have used this opportunity to try to highlight WFB3 game mechanics, in preparation for the Bring Out Your Lead! 2013 event at Foundry later in August.

Text in blue italics will highlight any rules I'm discussing. These are not complete discussions - just enough to broadly highlight the rule, why its happening - enough to remind you that this is possible. Hopefully, this should help jog your memory, and at the very least, remind you of some of the options you have available that later editions of Warhammer have taken away from you.

Also, as mentioned in the previous post - the weather had been most un-English and understandably refused to co-operate on the day. Blazing sun was cut short by irritating little clouds followed again by blazing sun followed by the perfect grey lighting - it was all over the place. This means that some of the pictures have amazing light, whilst others ended up being taken with the flash. I apologise for this inconsistency. In all, 196 pictures were taken - and I assure that that the 40 or so that make into this report are the best I could get from that lot.

Finally, I've changed the image settings on the blog. I had disabled the lightbox thing that has the images pop up in the small box, in favour of having the image open to a larger size as a new navigation. Unfortunately, it seems that the back button no longer returns the poor reader to their exact location on the blog - it just dumps you at the beginning. As a result, I've enabled the lightbox now, so if you do want to see the full image, you'll need to right-click and open it in a new tab or window. Of course, you're an experienced oldhammer blog reader already, so this is old hat to you.

These were the positions as recorded on the morning of the attack on Mourning Glory. The Halberdiers had elected for as wide a rank as they could fit on the road leading into the village, in front of the bridge. This woud give them some room to fall back, as well as serving as a defile where the massed ranks of the enemy would have no effect. 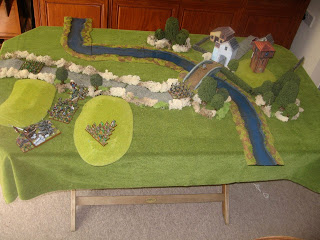 The goblins primary approach was from the south. Desperation meant that Grommbo was reluctant to instruct a specific order of battle - he knew the elves were breathing down his neck and so he just wanted to get into the village as soon as possible. His plan centred squarely on using the trolls to drive through the defenders without the rest of the force even breaking a sweat. If that happened, they could just move straight into the village and take up defensive positions. Grommbo was already considering how the Lead Belcher would need to be positioned to watch over the bridge when the elves arrived... 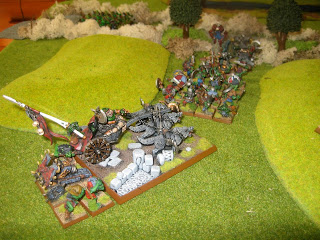 Grommbo was towing the warmachine with his chariot. They had lost the donkeys in the assault on the trading post, and Grommbo was reluctant to just let the crew push the thing - lest they desert and cause him the loss of what was now the tribe's most valuable asset.  Better to have the thing right under his nose, he thought. 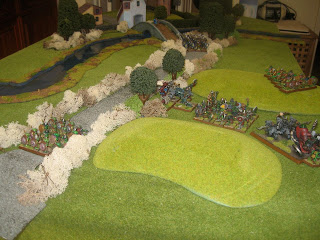 Grommbo had instructed one unit of sticka's to scout the approach from the west, looking out for those dastardly elves or any other surprises that would throw the attack. Clearly, they were bloody dreadful scouts, because the trolls arrived at the road before the bloody scouts did. Fortunately, it seemed, they were in good spirits - a clear indication that the scouts hadn't encountered anything remotely concerning - or, at least, had avoided anything dangerous looking and were keeping quiet about it. 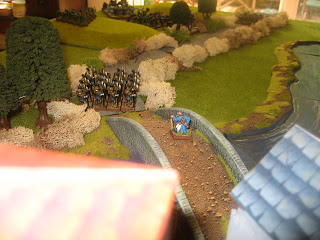 Dumbel Doore considered the various positions in which to position himself. Even as an experienced dungeoneer, he'd not ever had to fight trolls before. Seeing the legendary things for the first time both thrilled and horrified him: he knew they were made up of some of the rarest magical ingredients in the field - but they were rare with good reason - the Trolls didn't make getting them easy.

If nothing else, I can jump off the bridge, I suppose, he thought to himself as the goblin war horn sounded.

The goblins, being the desperate attackers, were given the first turn.

Grommbo opens proceedings by towing the Lead Belcher up the hill. The sticka's to his right held ground, drawing a bead on the halberdiers up the road.

This being only a small tribe of goblins, all the units successfully passed their animosity tests! Surprisingly, the Trolls also passed their stupidity test on their own Cl (psychology tests are taken against Cool, not Leadership in WFB3) and so lumbered forward, wheeling into the road. Unfortunately, they failed their second manoeuvre (being a second wheel to have them face the east), so they stopped bang in the middle of the road. The scouting sticka group moved up the road, taking position behind the comforting presence of the ginormous trolls and waiting for the Gobbo's coming in from the south to move before them. 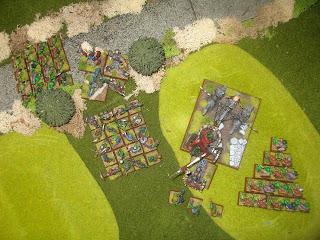 In WFB3, units can make manoeuvres. This is actually how wheeling, expanding or closing ranks and other simple formation 'changes' take place. Most moving activities are considered simple manoeuvres, of which a unit may make up to three - provided a leadership test is passed, of course. The first simple manoeuvre any unit attempts is always successful. If you fail the test, the unit simply stops moving and can attempt no further manoeuvres until its Reserve phase. Be careful which manoeuvre you attempt first, because failing the second one could leave your unit exposed! 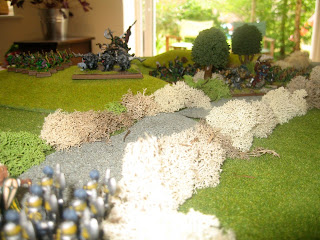 For information and a sense of completeness, units may also attempt complex manoeuvres - these are for the most complex formations or activities (such as wheeling backwards). You can only do one of these a turn and it always requires a leadership test to do. Bear in mind, you can either do up to three simple manoeuvres, or one complex manoeuvre. 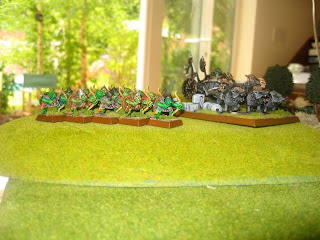 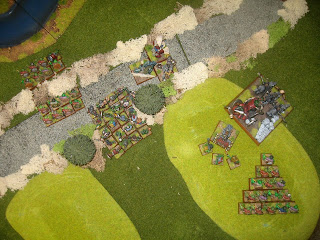 In the reserves phase (In WFB3, there are no march moves. Rather, there is a move in the Movement phase, and, provided you are not under any compulsory movement requirements, or within 4" of an enemy, you are normally entitled to make another move in the Reserves phase), the trolls complete their wheel and carry on towards the village. Grommbo instructs the sticka's on the left flank to get off the road and take up position on the banks of the river, allowing them to fire into the village and protect the left flank.

They make a 90 degree turn and start crossing the hedge. Figures changing direction costs no move in WFB3, so figures in units can turn right around and still have all their move. Whilst a unit is crossing an obstacle (considered difficult terrain), they will move at half distance. This means that typically, a unit of four ranks will take two turns (or one move and one reserve if they start in the move phase) to cross a 1" obstacle. Don't be afraid of crossing terrain in WFB3 - it is still slow to cross over, but without a turn limit, WFB3 gives you much more time to manoeuvre - scenery is not the time sink it is in later editions of the game! One thing worth noting, however, is that if your unit is charged whilst crossing an obstacle, they must take a panic test - so don't do this near an enemy if you don't have to!

Big 'Red' Testeese orders his gobbo's into the road. They don't have enough move to get completely on, so they'll need to wait for the next turn. 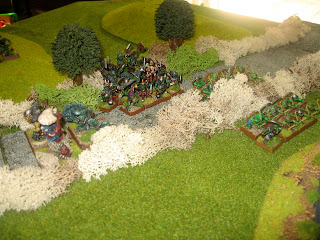 We've not really discussed the Halberdiers this turn - that is because they didn't do anything in their turn.

But - young Dumbel Doore did cast a spell in his Magic phase. Unlike later editions, where the magic phase usually happens after Movement, the Magic phase occurs at the end of the turn. Also worth noting is that each wizard may only cast one spell per turn - a dramatic change from later editions!

In this case, Dumbel Doore decided to cast Leg Breaking on Grommble (attached to the trolls). In this case, Grommble is entitled to a magic saving throw (specified in the spell description). A magic saving throw is a test against the unit's Will Power (WP). Unfortunately for Grommble, he fails his WP test and collapses to the floor with a loud and wince-inducing crack! Leg breaking will reduce the victim's Movement (M) by half.