Zoids, Liebsters and An Oxymoron

Dear Reader. It has been a long time.

Where to begin? What explanation does one offer for two months of stark, blank absence, the same post waiting to greet you on your repeated visits, shamefully shuffling its feet, unable to explain where it's colleagues are or indeed, quite what is happening with this enterprise as a whole.

And yet, despite my absence, I seem to have collected some Liebster awards.

Now these things wander around the internet all the time, constantly hounding bloggers into frenetic bursts of personal revelation, as well as the instruction to nominate five or ten or twenty or whatever-the-hell-the-number-is blogs to be visited as part of the nomination.

So, let's explain. I'll get to the Liebster things in a bit. In defence of my absence, I can only say that I've been living in another hemisphere for the whole of May. For those in the know, they'll realise I'm traditionally based in the northern one, so the only other one I believe we have on this planet is the southern one. That's the one I've been in. Tine to learn a word:

a figure of speech by which a locution produces an incongruous, seemingly self-contradictory effect, as in“cruel kindness” or “to make haste slowly.”

The oxymoron I shall employ by way of example is 'family holiday'. Ostensibly, the purpose for my spending the entirety of May in South Africa was for a family holiday. Don't get me wrong. Families are great. Holidays are great. But the union of the two is something frankly unholy, especially for extended periods of time.

Oh wait. It occurs to me that I ought to define family at this point. I don't refer to the spending of time with my wife or my child on holiday as 'frankly unholy'. They are treasures to be savoured and time with them in a relaxing environment is pure gold.

I'm talking about the rest of the bloody family.

So May has largely been spent in a curious state of pleasure (I forgot how well they eat out there!) and despair (I didn't fly my child 9000 kms for you to ignore her as you watch 20/20 cricket...)

More frustratingly, 31 days of being 'off' have failed to produce even a single painted figure. Not only was I not in the same hemisphere for the whole of May, but in order to prepare my employer for my considerable absence, I pretty much spent the whole of April working flat out, again stopping dead in it's tracks my hobby time. No blogging, no painting. Even accessing the Oldhammer Forum has been sporadic and confused. Both because of time and the desperately poor internet connections made available in South Africa to me.

Let me just say this - if you are planning on starting a new country, or perhaps taking over the one you currently live in - when you write up the new constitution, please ensure you enshrine the right to high speed internet access within it. Internet access is now a human right, not some kind of product to be exploited! I shall send a very strong letter to the European Parliament expressing my thoughts on the matter.

Still, I did get some time to catch up on the various blogs I frequent (but for May). It was whilst I was so doing that I noticed the whole Liebster thing. Firstly, Thantsants of Somewhere The Tea's Getting Cold thought kindly of me and dropped a mention, and then Stylus of The WoffBoot Chronicles did something very similar!

I have nothing but praise for Thantsants, being, as he is, an all round fine gentleman of noble demeanour and sound oldhammer principles. Quite frankly, I have no idea how such a chap gets all his painting done - I can only imagine his house must overflow with joyous visits from the thousands of friends he must surely have.

I didn't realise it, but The WoffBoot Chronicles is spearheaded by the efforts of not one but two thoroughly diligent posters (Stylus and Kraken), who have also recently experimented with remote gaming - a thing we've explored here on this site two or three times before.

So - thanks to the both of them for the award. I seem to remember these things have made their way to this blog before, but not with the considerable verve that seems to be sweeping the oldhammer community at the moment. Far from ignoring the thing, I thought I'd mention it and provide the suitable supplication in response to those who have awarded the them.

I gather from the way those that have offered the thing to me have blogged, one is suppose to be asked a set of questions and must therefore provide a set of answers. I'm afraid, dear reader, you shall have to wait in violent suspense for those answers, because I have other things to do right now.

One of the curiosities that returned from South Africa with me was the dusty remains of the only Zoid I ever owned - Mad Thunder: 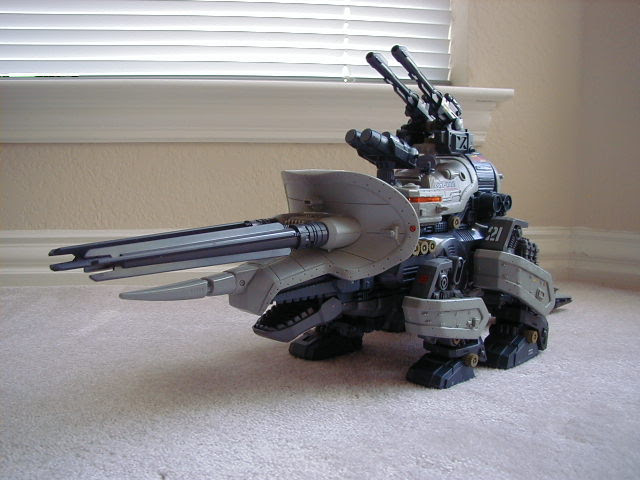 The image is not the one of my own Zoid, which was in a much dirtier state and had been disassembled for storage, you see. I also very much doubt the electricals still work.

The thing is, I've long been considering some sort of 15mm Rogue Trader - an idea that has been gaining traction in other corners of the internet. I fear that the Zoid is the last straw in this campaign against my wallet. I fear I must concede and buy 15mm stuff immediately. Otherwise the Zoid will be lonely.

That would never do.

Finally, just so that there is no confusion - yes, I will continue to tell the tale of young Gromeo and the Escape from El-Catrase - I still have the notes and the pictures, although I've taken so long with the thing I'll now have to buy Comic Life in order to complete it - the evaluation copy I had expired ages ago...