Ten Things. In some sort of order. A list, if you will...

You've probably seen this going around: 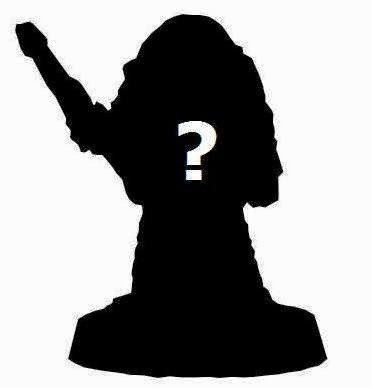 These are the things that the internet runs on, after all.

But, before you judge my response to be critical and sarcastic, of course, it serves a good purpose. For are we of the oldhammer movement not gripped by nostalgia? Reliving our childhoods under some maniacal delusion that somehow the things we craved as children are somehow more within our grasp now that we earn money? And what better way to relive that nostalgia than to see the blogosphere erupt with memories retold and hopes relived - sometimes even realised.

Also, it makes a nice change from trying to get some hobby work done in the baking, stagnant heat of our house (it's one of those, warm-in-summer and cold-in-winter varieties, you see). Unfortunately, I am not blessed to be a member of the teaching profession, and so must confine my painting activity to the evening, when I am tired.

Heat and exhaustion are not conducive to painting, it seems.

Now my list is really the top 10 miniatures that for whatever reason burned themselves into my consciousness as a youngster. I would drool over the catalogues trying to devise ways that I could get my hands on these things. Being out in South Africa at the time confounded the situation even more, what with the unfavourable exchange rate, import duties and the general opinion of the era that if boys weren't playing games that involved some kind of ball, they were clearly mentally defective or homosexual.

So, herewith a pleasant evening's distraction. It is worth noting that I have numbered the images, not because these are my preferred order or that one is more favoured than the other. This is simply so that you know how much more list you have to go, lest you are overcome with your emotions and must look away. 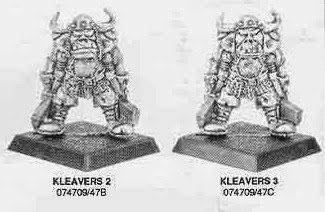 1. This is everything an orc is supposed to be. Stupid, menacing and a bit gormless. 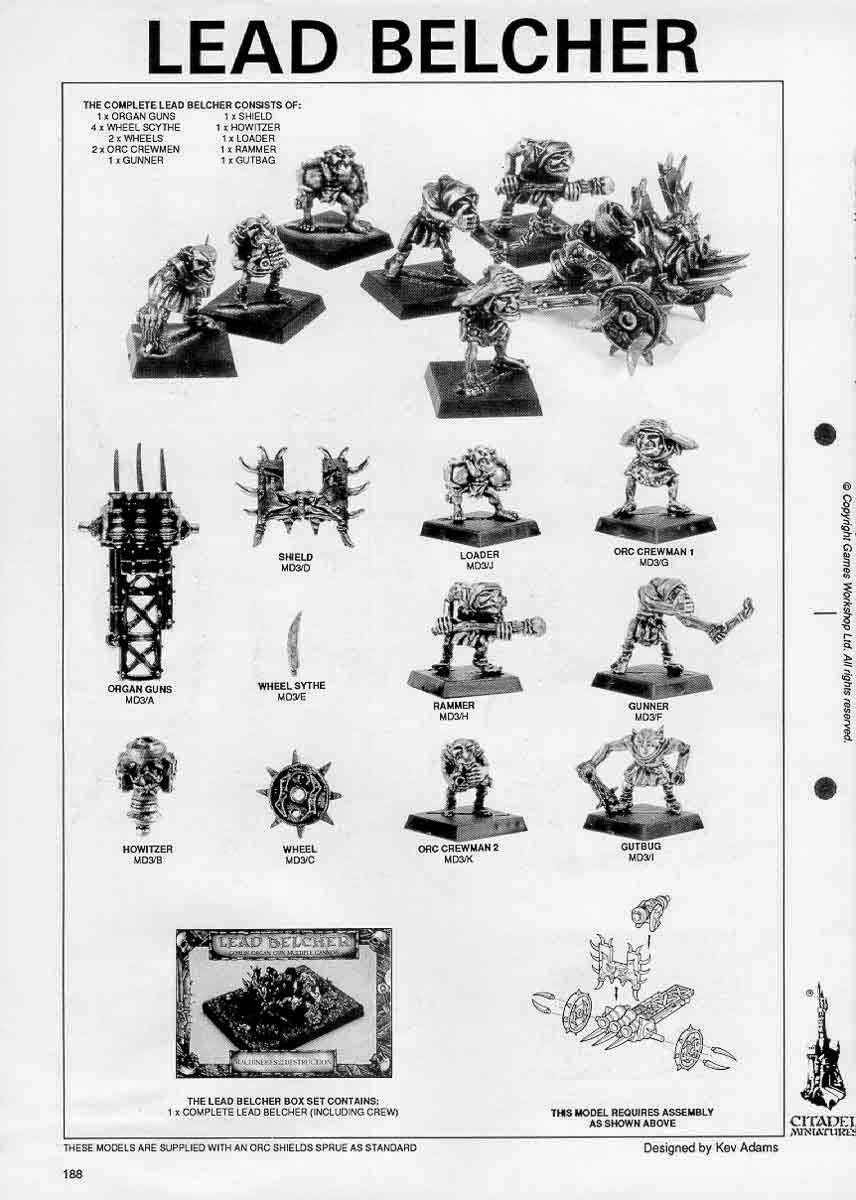 2. I was one of those Tolkien Lord od the Rings sort of kids. In that line of fantasy, gunpowder weapons didn't feature. Imagine my surprise when games workshop not only suggested that goblins might have cannons, but that they would have the most awesomely irresponsible sort of cannon in the world - one with blades on the wheels and a ridiculous mortar on top. I have the perfect video of this weapon firing in mu head... 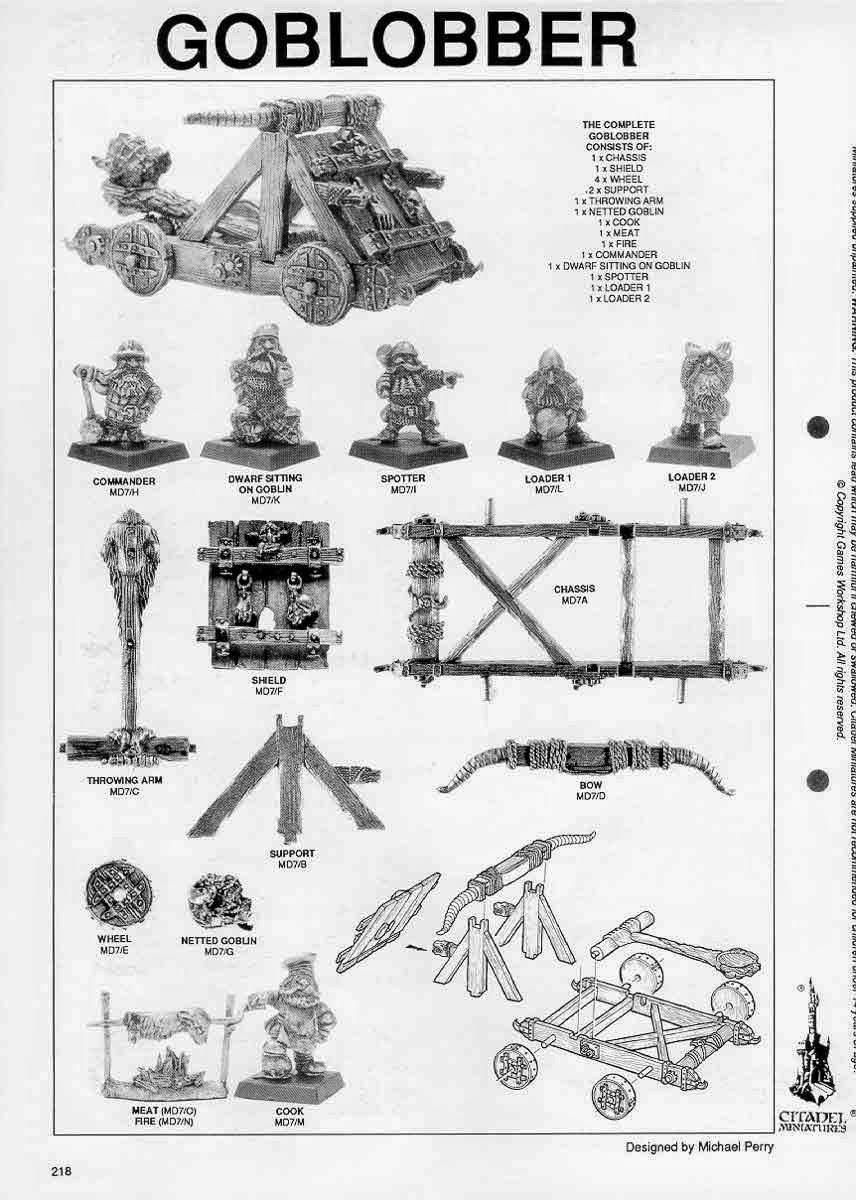 3. Again, another off the wall suggestion from GW - a stone thrower with a crew at rest, but also expressing their extreme hatred of goblins at the same time. Casual hate, if you like. Beautiful.

I don't have one of these yet. 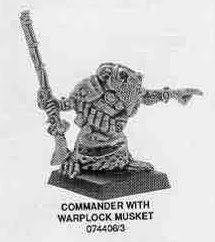 4. Tolkiens fantasy and what little other fantasy I ended up with didn't include ratmen. I was initially skeptical about this race - I mean, really? Its a man-rat. Come-on.

But then one day, a friend of mine decided to play skaven (we played with cardboard, you see) - and he fielded something in the region of 600 skavenslaves (you can do that sort of thing with cardboard...). It was then that the way the army worked dropped into my thick skull and I was hooked.

Alas, I never had (and don't really have it now) the money to pursue the skaven, but I always, always wanted this figure. He just says control. 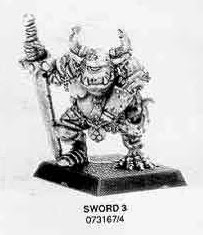 5. I remember when I first saw the Red Catalogue. This dude was on the front. Or maybe the back. I submit that he was quite obvious, at any rate. I had no real idea what chaos was and I actually thought this was some sort of 40k orc. Again, from my constrained Tolkien line of fantasy, I hadn't quite wrapped my mind around the idea of orcs with guns - but this guy? He was the gateway drug. 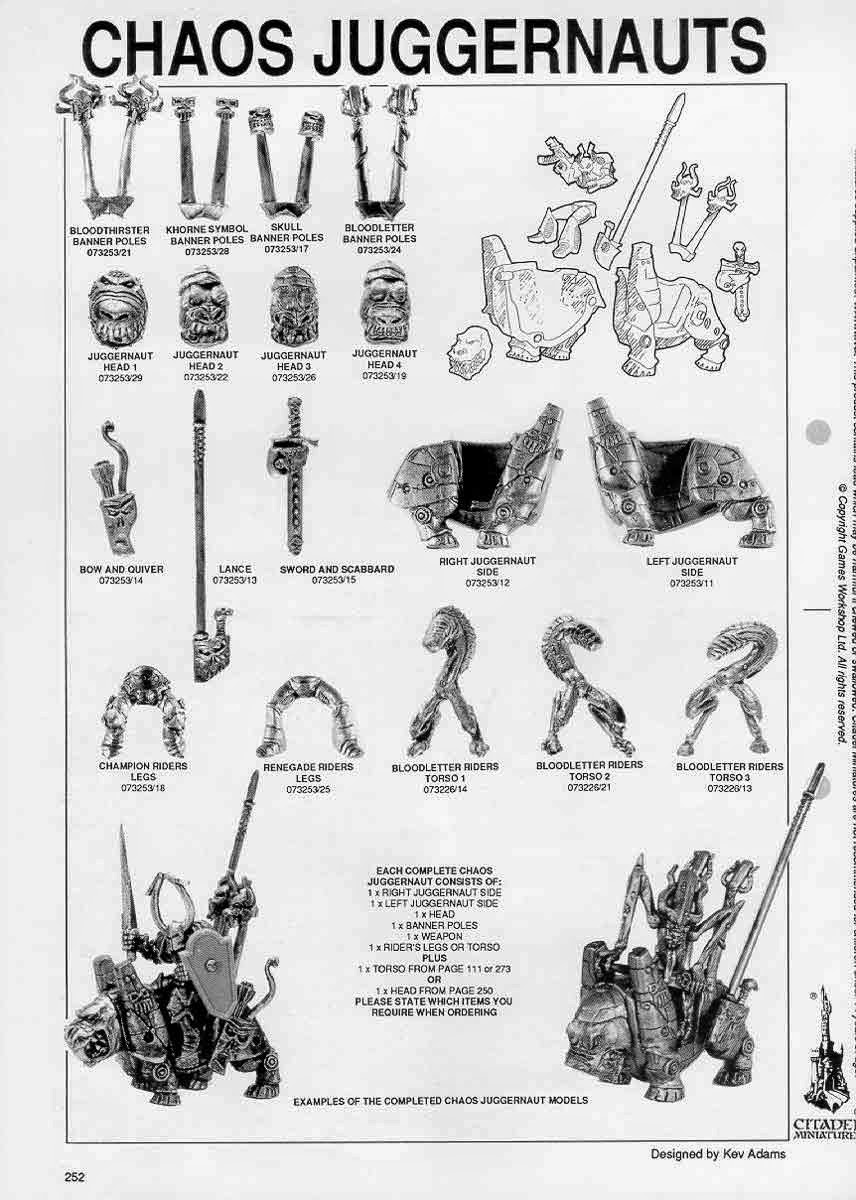 But I couldn't let it go. I would stare at this thing for hours in the catalogue, trying to work it out. Trying to make sense of it. In doing so, it moved from my all out worst-idea-for-a-figure-ever to one of my all time favourites. What a bloody good idea!

I have seven of these. I could really do with an eighth, if you have one lying around. 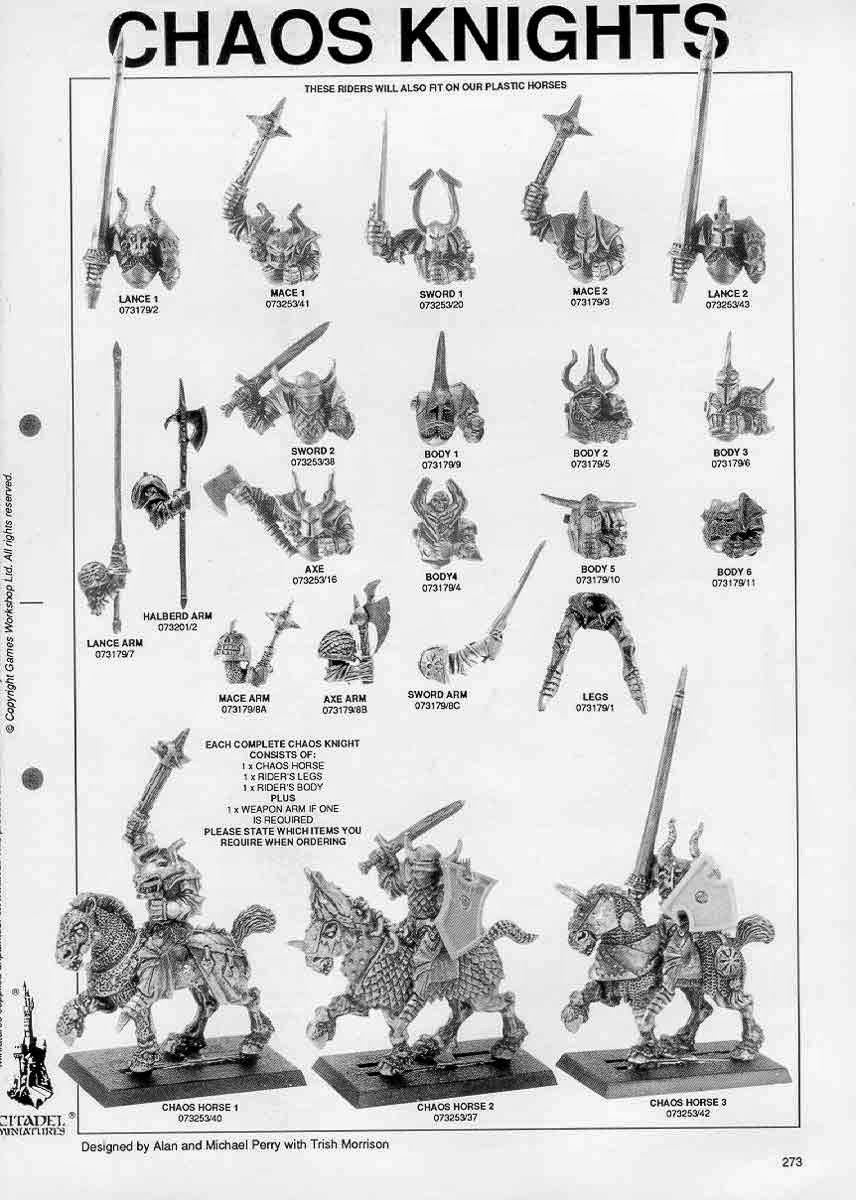 7. Chaos Knights. F**king love 'em. I remember running through the catalogue and stopping because of just how big these guys were. And the horses! Proper, big, scary horses. When I had laid my hands on Warhammer Armies, I was quick to determine that five of these buggers would make a massive dent in an army list without making a massive dent in my budget. How I longed to have enough money for 5 of these guys...

...twenty years later? I have five of these. 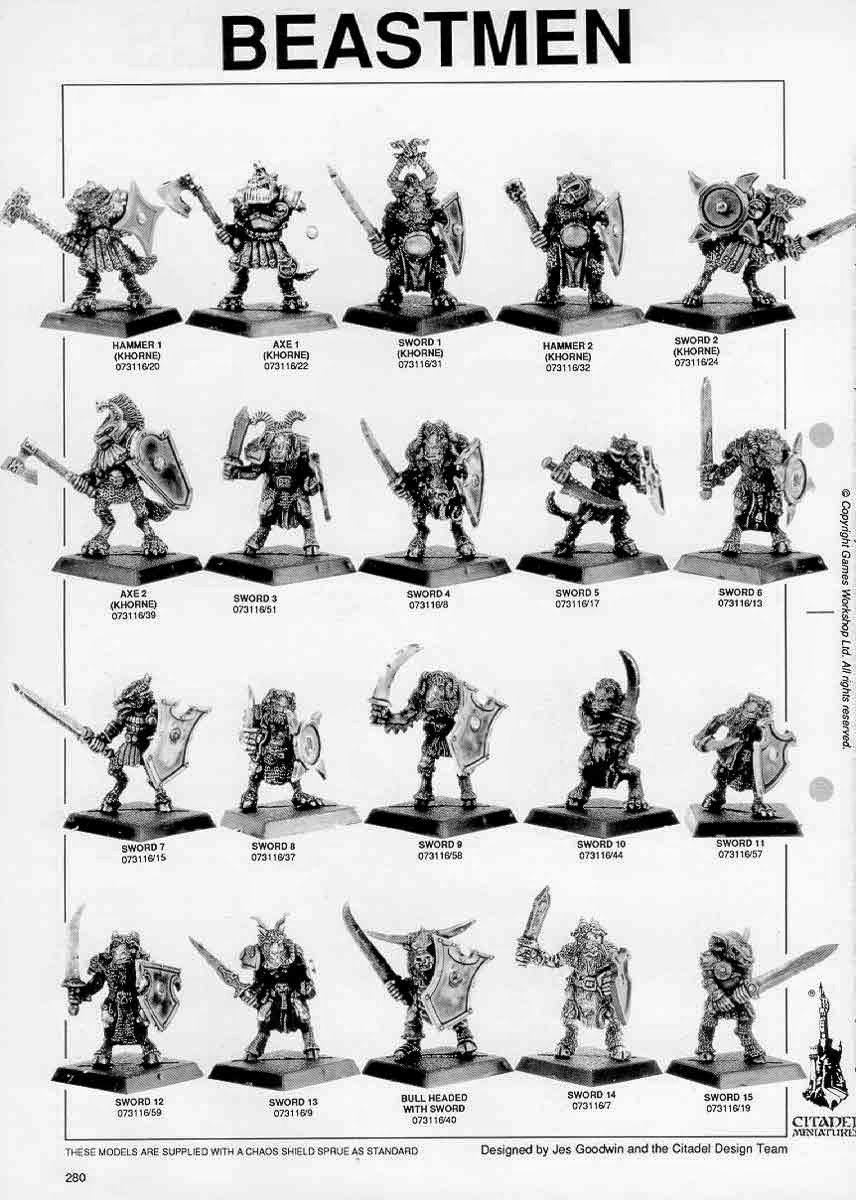 8. I was in a bit of a quandary about the beastmen, to be honest. But in the end, because of the amount of time I spent staring at the three or four pages of beastmen in the catalogue, I decided to include them. Again, to a child's mind, the idea of paying ten points for a W2 WS4 figure just completely blew my mind. How could it be? How was this possible? And they could have chaos mutations? I specifically remember marking all the ones that weren't goat like in the catalogue, trying to work out how few would be left and if one could make a viable unit of the remnants.

Curiously, I only have one of these now - the others have traded for other things I'd rather have. 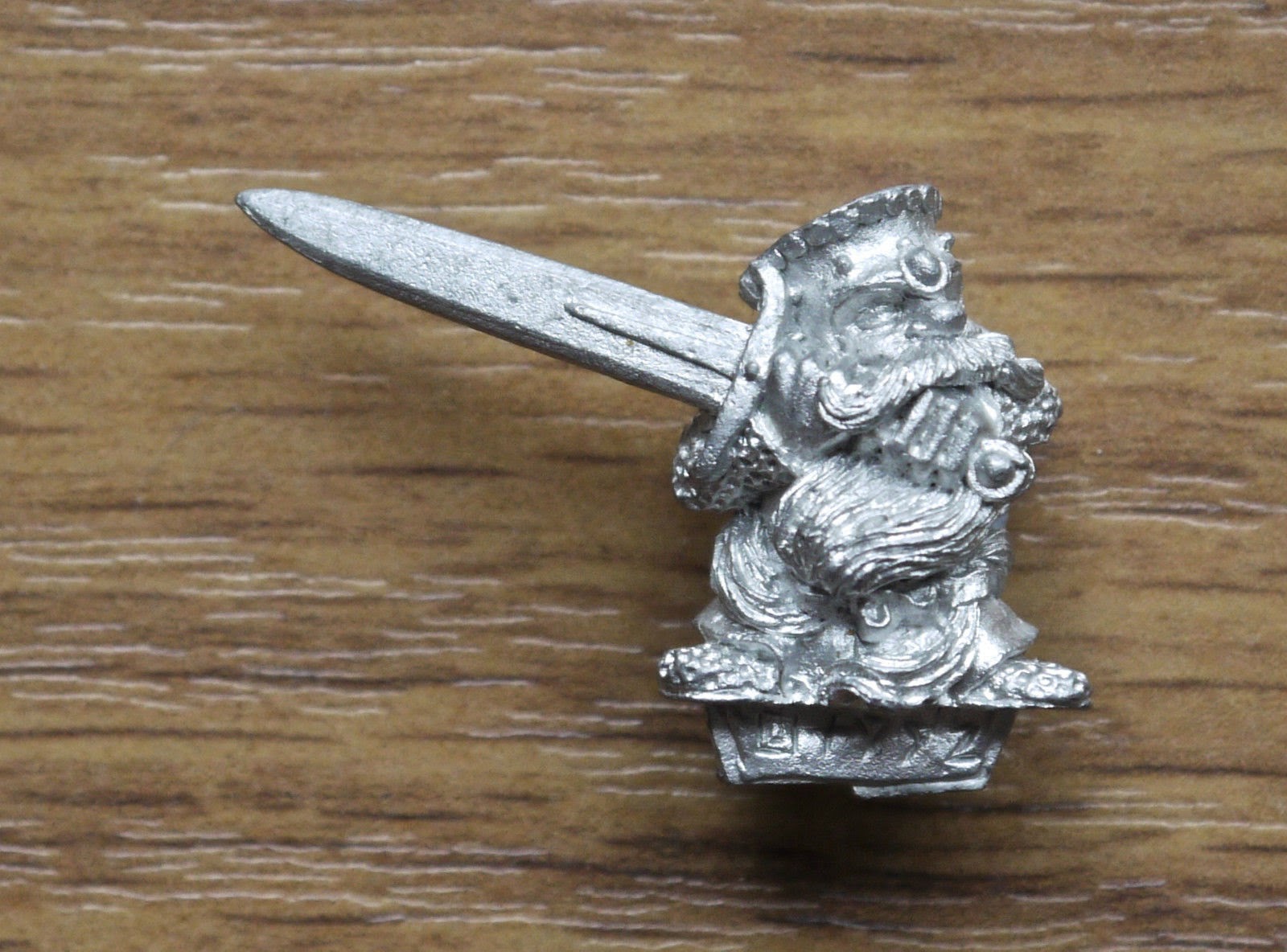 9. Marauder Longbeards. The whole range, but specifically this one. Because dwarves don't have to use axes and hammers, Games Workshop. Get over yourselves, arseholes. And if Skaven can somehow wrap their idiotic minds around the spears-in-tunnels conundrum, then so can dwarves. Arseholes.

I don't have any of these any more. Alas, how I miss them! 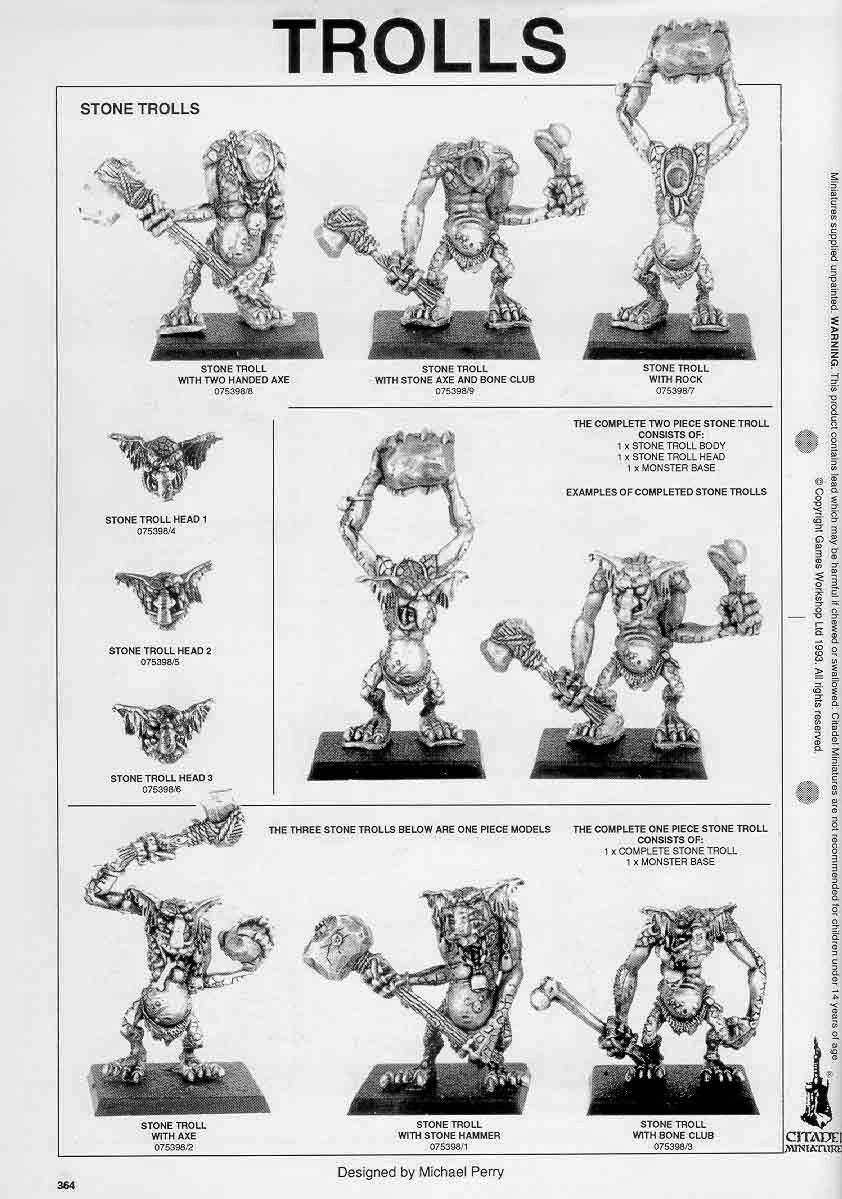 10. Stone Trolls. I think the real testament to these figures is the considerable length of time they've been in production. These guys started my off on my first goblin horde - I loved the idea of the really little guys and the really bug guys forming a force - especially the idea of goblins trying to goad stupid trolls into combat.

I used to have six of these, but they've all been traded to grow my collection in other directions. I love the figures and I think they were really important in GW's history, but curiously, I have no desire to own them again. Well, okay, maybe a little bit.

So there is a brief trip through my nostalgia. You'll note that the Red and Green catalogues are broadly the only ones featured, so you can tell exactly when I got into the hobby. There are loads of other amazing figures for so many reasons, but these ten - these are the ones I'd drool over, imagining them in my armies and coveting them in others' armies.

It remains to say thanks to those who have posted this up - one of the most pleasant little wanders I've had through the past in a long while. Cheers, all!
Posted by Weazil the Wise at 15:04