The charge of the heavy brigade

Well, heavy metal brigade, at any rate. They sure don't make 'em like they used to.

In one of my earlier posts, I lamented over the fact that I did not have enough undead horsemen for my undead army. 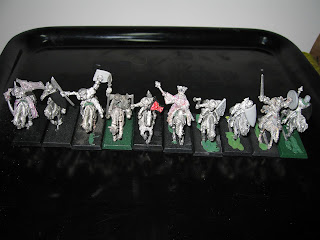 Now, I actually acquired these chaps quite a while ago, shortly after I posted my first undead post. But, many things got in the way, and I didn't get around to stripping them and cleaning them and doing all the things they needed to feel appreciated.

Stripped, you say - what's all that colour on them, then?

Yes, some of them still have colour on them. I don't know what sort of paint was available in the 80's, but I'm guessing it's the same stuff they use to paint camouflage on tanks, because even the power of Nitromors has been defeated by the stuff. I'm pretty comfortable that whatever I paint over it will bloody well stick, at any rate. Also, I've reused bases where possible, and I've filled the gaps with green stuff, which accounts for other colours you're seeing.

The painted shield hasn't been stripped - it actually came off the model with it's hand, so I lost it for a short space of time and it wasn't around when everything else was stripped. I found it quite inspirational, actually - it's great to see real 80's colour coming back out on these figures. That said, I'm not sure how much pink will be featuring in the army...

Another pic from a different angle: 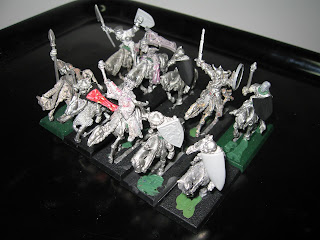 Also, I managed to get my hands on a Plague Cart: 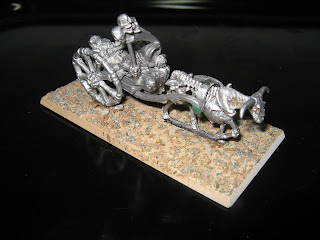 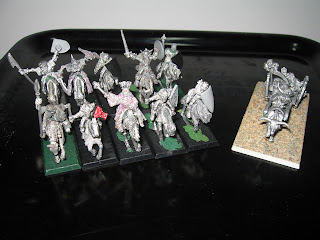 And, no doubt, because blogs of this type always discuss rules and unpainted miniatures, but never painted ones, I thought I would present some progress: 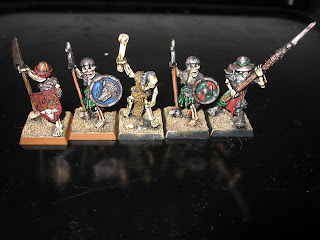 5 painted skeletons. I've not finished the bases yet as I'm undecided on the approach I'm using. The main colours will be red and green, with other arbitrary colours thrown in because...well, they're undead, so they're not too picky about what they pick up.

Also, 5 in progress skeletons. These are the front rank for the unit above - featuring the legendary Ennio Mordini and Associates. I always paint another rank before I do the command groups, just to make sure I'm happy with the colours and stuff: 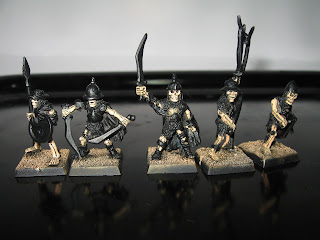 So next on my list of fun stuff to look out for will be some screaming skull catapults and some carrion crows. In the mean time, plenty to sit and paint.
Posted by Unknown at 10:57

Email ThisBlogThis!Share to TwitterShare to FacebookShare to Pinterest
Labels: Undead