Realm of Chaos: a bit more manual than I expected...

When I started in this direction, I wasn't really all that taken with Chaos. It was just a way of getting some more interesting and different models into the Undead army, and the Orcs & Goblins that are forming in the background.

Then, I came across the digital copies of the Realm of Chaos books. As discussed earlier, I spent some time creating a Champion of Chaos and generally mucking about with the books. Since then...well.

I've been infatuated with them.

So much so, that I've diverted the large bulk of my model fund in order to buy them: 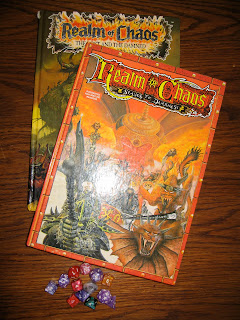 My digital copy of The Lost and The Damned was a little corrupted, so I wasn't able to see certain sections of it (like the Tzeentch army list), but I was able to get enough from it to take action when it came up on eBay.

The main reason for this sudden infatuation is around my other main objective of this blog: Warhammer 3rd Edition evangelism. I've tried to get Warhammer 3 going, but at the club, most people are more interested in 40K, or trying to get their fantasy armies ready for tournaments. Don't even get me started on why I think that tournaments are single-handedly responsible for everything wrong in wargaming today. In short, interest was low to start with, and now its dwindling. Also, sickness has prevented me going for a few weeks, so ...out of sight, out of mind for them, no doubt.

But, one of the things that really grabbed me is that one can play skirmish games with these rules. A large portion of Realms of Chaos is around the progression of your Chaos Champion and how he and his little retinue develop. What better way to learn the good sense of Warhammer 3, then to play it in small skirmish games, where the various individual little rules come into their own?

Also, I quite like the idea of the Champion and his Retinue being the seed of a Chaos Army - a great way to get painting something that can be played with almost immediately, but can also grow into a beautiful army. A lot of Khorne on those two blogs.

I am sort of interested in a Nurgle army at the moment, mainly because a Nurgle army can include undead units in it and can also make use of the Plague Cart that I've recently acquired. That said, I was very disappointed to note that the format and general quality of The Lost and The Damned (which has the Nurgle and Tzeentch lists in it) was dramatically different to the other 3rd edition books - in fact, it is evidently the predecessor to the current army book format we have been forced to endure since Warhammer 4th edition onwards. I refer to the quality because it seems like various elements and rules that were present in Slaves to Darkness (and relevant to those armies) appear to have just been left out. Also, it looks like The Lost and The Damned is the first book to experience some serious power-creep - the magic items available here run rings around anything available in the other books.

That's got me thinking that I'd rather build an army from the Slaves to Darkness book instead.

So...given that there's so much Khorne going around at the moment, I wonder if I shouldn't look at Slaanesh instead? Now what the hell am I supposed to do with that Juggernaught that's just arrived?
Posted by Weazil the Wise at 08:51