Many people died to bring you this report.

This is where things were after Turn 1: 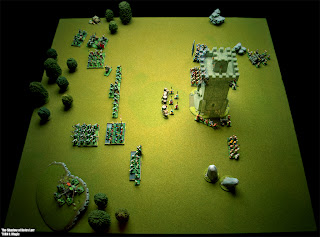 Both forces continued forward, as aggressively as possible. So aggressive were the orcs, in fact, that Krunk's Crushers charged the Night Bottom boys in an attempt to get them moving! 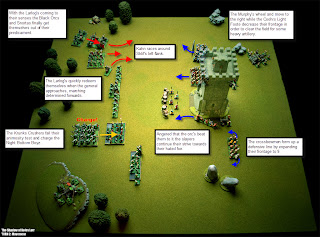 Also (try to imagine this in slow motion, possibly with epic, tragic classical music playing), The Coohrs Light Foote regiment stepped into the line of sight of the Man Mangler...

On the left flank, Ruger's Troll Slayers continue to move up, determined to meet their fate. 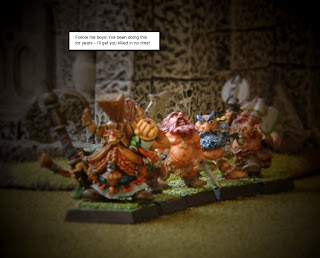 "Well, boys, I feel like I should issue some sort of apology, really. Not seeing any trolls at all," Ruger said whilst surveying the field. "I really thought this lot would have some."

Heckler stepped forward and patted Ruger on the shoulder. "Don't worry, chief, you did your best. I'm sure we could find a suitable fate somewhere here today. Stiff upper lip and all that."

The other dwarves all stopped and turned to look at him. Wesson shuffled nervously.

Ruger cocked an eyebrow. "Not sure what you mean, son?"

"I'm just, y'know, having doubts about the whole slayer thing. It all sounded fun when I signed up, but now here we are, and the weathers crap, and I'm cold and hungry and there's a whole lot of angry orcs just over there. Just - seems a lot, is all."

Smith gripped Wesson's shoulders in each hand and shook him. "Pull yourself together, dwarf! This is your big moment! If you try hard, and stay focussed, you could die today! Just imagine!" Smith's eyes started to glaze over as he pointed at the approaching goblins. "Imagine charging into those goblins. You swing this way and that, but its no use.

"You kill four, maybe six, but they overpower you, forcing you to the ground. Still you fight, but their numbers never end. Kicking and biting, they spill your blood on the ground. Ever weaker, you hack and hack and hack, until one of them chops your hand off. Even then, you beat them with the wet stump, all the while bleeding to death. Eventually, greatness comes. Your eyes shut and cough your last blood choked breath..."

Ruger, Heckler and Koch all stared at Smith in wonder.

Koch wiped away a tear. "I'll miss you when you're gone, buddy!"

"What? WHAT!" Wesson cried. "Listen to yourselves! How the hell did you guys even get here? What did you do that was so bad that you want to get killed out here for it!"

"Cut myself shaving," Heckler said, shaking his head. "Dad was so disappointed..."

"My mom caught me touching myself," Ruger said in a matter-of-fact tone.

Koch bit his lip, overcome with emotion. Ruger put his arm over his shoulder "There, there, Koch. I know its tough, but we can talk about it here. This is a safe place to feel."

Wesson's stood with his mouth open, staring at the others. "I...I don't know what to say."

"What about you?" Ruger's eyes sought out Wesson's. "What's your story?"

Wesson dropped his gaze. "Late library book. Mrs Fletcher was such a bitch about it. She even said she wished I was a troll slayer. I didn't know what else to do..."

The others nodded. "Tough one. Mrs Fletcher's a real cow," Smith said. "Although, I also had late library books once. She said then that she wished I was a toll payer. Maybe, you know...you didn't hear her correctly? Usually, you just pay a toll when they're late, you see?"

"Look, what's done is done," Ruger said. "Here we are, a brotherhood of slayers, on a field of opportunity. Let's not let this one slip!"

The others ignored him.

"Follow me, boys! Today's the day we die!" Ruger yelled, swinging his axe in the direction of the orcs.

Wesson watched as the others rushed ahead. He sighed. It wasn't even a good book, come to think about it...

Shooting was devastating. In total, twelve dwarves kicked the proverbial bucket. The Man-mangler, the only six man (orc?) stone thrower available in Warhammer Armies, lived up to its name, by scoring a direct hit on the Coohrs Light, mangling seven of that regiment's fine dwarves.

Also, four slayers met their embarrassingly pitiful fate, cheated doubly by the greenskins in that:

a.) there were no trolls
b.) turns out the goblins are pretty good with the bow, so they didn't even get to swing their axes 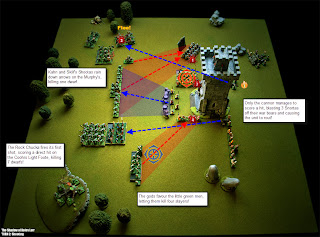 In return, the dwarves introduced the orc boarboys to time travel, by blowing three of them into next week Wednesday with twelve pounds of iron. Everything else missed, including the Gob-Lobber. The blue cross hairs mark where the stone landed. 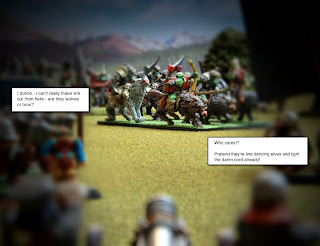 "What's that, then?" Orl Branne asked.

"I bet they're up to no good. If you don't have a banner, you're busy sneaking, aren't you?"

Crun looked thoughtful. "Yeah. You're probably right. Although, we don't have a banner."

Orl patted the cannon. "No, but I like to think of this as a musical instrument. They know we're here, all right. No sneaking about for us."

Crun laughed. "Too right. Well, we'd better shoot them, before they go off and do something sneaky!"

"Yes. We'll be heroes. No sneaky sneaking whilst we're on the job, eh?"

The two high-fived, before Crun touched the cord with his cigar.

The little orange '1' next to the cannon is a heat point. Back in the day (before special dice with special symbols), when kids could do arithmetic, cannons would accumulate heat points. Essentially, the first cannon shot is risk free, but thereafter, heat points will build up. The firing player rolls a d6 and adds the heat points to the roll. If the roll exceeds six, the cannon explodes. Leave the cannon for a turn, and it will cool down, thus losing a heat point.

As you can imagine, dwarf supporters (myself chief amongst them) will be keeping a keen interest in that little orange number.

Much like sex on the first date, Blue was able to put out with some Turn 2 combat. Specifically, Krunks Crushers obliged you eager spectators by climbing into The Night Bottom boys, giving them a sound thrashing, managing to traumatise one of them enough for him to stop living. 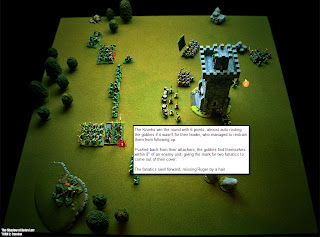 Predictably, the orcs beat the stuffing out of the goblins, causing them to be pushed back 2". This event, in turn, was just enough to bring the Night Bottom Boys into 8" of the Loane Rangers, causing two crazed, drug-addled loonies to break ranks and launch themselves cackling and screaming at the dwarf line, swinging giant, back-breaking balls of iron.

I've played goblins (that is, just goblins, not orcs and goblins) for about ten years now. I completely forgot about the possibility that he might have fanatics. Never even crossed my mind. Idiot.

Reserves was more of the same, with the two armies just tightening up their lines. Ruger, unfortunately, was unable to do anything clever in order to get away from the fanatic - in 3rd edition, you can't make a reserve move if you are within 4" of an enemy.

As you can imagine, orc supporters (Blue chief amongst them) will be keeping a keen interest in those two fanatics. 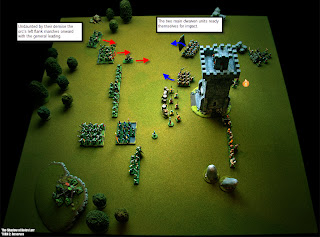 One of the things that is proving quite interesting is the middle of the board being completely static, in some sort of bizarre napoleonic shooting match. Also, the fact that both commanders are on the edge of the field is something I haven't seen in a long time. 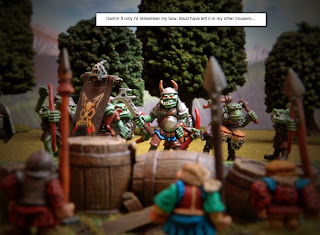 I just put this section here to rub it in. The dwarves didn't bring any wizards, so we're not that concerned one way or the other. Blue elected to bring young Milliog, a wizard, but as you know, he elected to leave with the remaining boar boys once the dwarves explained physics and how important velocity and mass are in that particular field. Unfortunately, Milliog didn't get a single spell off in the game.

Looking at both the battle at the Wyemm Seeyay and this battle, one can see the dramatic difference between the occasional presence of magic in 3rd ed, and the overwhelming sledgehammer it is in 8th.

This is the state of affairs at the end of turn 2: 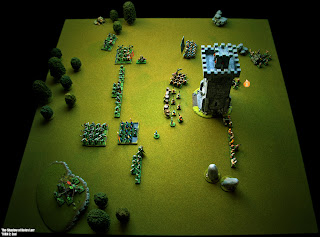 Will the dwarf cannon explode? Can Ruger evade the whirling fanatic? Will all of the orcs pass their animosity tests? Tune in next time for The Shadow of Koles Lorr - Turn 3!