Sometimes, when left lone for long enough, I commit my mind to feats of brilliance. We've had no progress in the Battle of Koles Lorr (and alas, no update tonight), so this afternoon, I found myself left alone for long enough. I pondered over the cure for cancer, refining my experiments in this area. I thought about the piracy issue in Somalia and of the solution to that land's difficulty. I drafted up a potential plan for the Euro and what the chaps over in Brussels ought to be doing to get out of the sticky mess Europe finds itself in. I offered some marriage advice to some people.

All in all, pretty humdrum stuff.

But then undiluted brilliance hit me with its full force: I have some painted goblins!

Let me explain: before, when I used to play Warhammer 6, I made use of a goblin army. No orcs, just goblins. These hordes were all crafted from the awful plastics produced for the 6th ed. release. In the end, I sold that army, to return to the one true way, which turns out to be several kilograms heavier.

But, I kept some of the more special figures. Special to me, that is. They were hardly remarkable on the field, let me tell you (apart from Manny - more on him later).

So, moving on, I realised that if I added those remaining few goblins to my collection of Groms, I could  scrape a unit of 10!

Following that train of thought, I realised that I could then use these little fella's as chaos goblins - either as an ally contingent, or just as some followers of a Chaos Champion from Realms of Chaos.

By now, my tiny mind was in overdrive. Unable to draw the brilliance to a halt, I then conceived an even further element of inspiration: What if Grom (the chariot based one) could be used as a Chaos Champion? There are many chaos gifts that can render a champion immobile, resulting in that champion needing to use a cart or a chariot.

Being far too generous to keep this idea to myself, I immediately set about taking a picture of what that could look like: 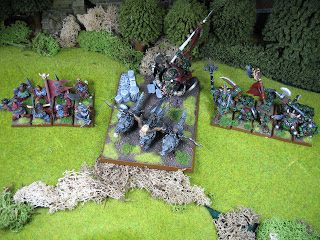 But still, brilliance was bursting from every pore and bouncing off the walls. What if I allied my Undead with that Chaos Warband?

So I took a picture of that little scenario:


And then focussed on specific areas, because that picture was awful:

The goblins that caused it all. Essentially, three Groms, a Skarsnik from the 90's and assorted war machine crews. I had to rebase the non-Groms, but such a small effort enables so much! Of course, once I've painted up my 80's goblins, these ones will be decommissioned, with the exception of Skarsnik (4th ed's close enough, and besides, there's Grom too!), Manny and Weazil. More on those famous personalities below.


You would have seen these dwarves before. Unfortunately, I had a modelling accident, in that I held the matt varnish spray can too close to the two chaps on the left, resulting in their faded out looks. I'm not really sure of applying any gloss will help, or if I need to fix them with paint touch-ups (advice welcome) but I will need to do something to restore them to their cheery selves...

Manny and Weazil. You're unlikely to know them, but these are the very definitions of Special Characters as GW would have you believe. Together, they formed the core leadership of the afore mentioned Goblin army. Manny was the general of the force, but was only a hero level character (35 points - he totalled 39 with his shield and his chainmail) - not a lord. Greatest of all his accolades (and there are many) was his defeat of a blood thirster in a challenge. With no magic weapons. Granted, the blood thirster didn't flee, so Manny had to spend another round with it, which turned out for the worst, but imagine the look on the guys face when he realised that his blood thirster had just taken a wound from a goblin, for none received. Priceless, as those clever chaps from Mastercard say. Manny was named from two sources:

1: The leader of the orc army in the 3rd edition scenario 'Forenronds Last Stand' is an orc called Mandraks the Murderer. The name has stuck with me forever, so it seemed right that a more diminutive version of the Mandraks name lead the goblins.

2: Making a second reference to Flintloque - the goblins in that world are positioned as being the occupants of Portugal - that is, the Portuguese. At the time, I knew enough Manny's to go with the stereotypical Portuguese name and stamp my goblin leader with it.


Weazil was the army banner bearer. He was modelled to have the something-or-other red rowdy banner, which gave +1 leadership to everyone. You may note that my online moniker on most forums has been taken from this brave little goblin, who has controlled the discipline of thousands of goblins across all sorts of theatres with his calm, collected presence and the vigourous waving of his banner.


Weazil is an unmodified figure from the current edition metal goblin chariot.

Manny is actually a grot from 40k. I picked the figure because I loved the fact that he was shouting. Of course, his main job as a general was to shout at the whole army, but this figure was especially chosen, because Manny's main body guard came in the shape of three very large and very stupid stone trolls (sadly, no longer with us...). Suffice to say, those trolls required an awful lot of Manny's vocal guidance. Imagine, if you will, Manny's exasperated voice as he directs the trolls in the actual direction he wanted them to go...

Here he is with an original, unmodified grot:


So what we have here is a ... well, mish mash of stuff. It's lots of painted figures all stuck together and crowbarred into a Realms of Chaos force of some sort. Because I could...

Anyway, hopefully there will be more on the business of Koles Lorr soon, but thanks for stopping by!
Posted by Weazil the Wise at 14:35