Another six zombies. I can't believe it. Okay, they're not completely complete, a they'll want some basing, but still. Six extra zombies. That means I've painted seventeen models in one month so far. And the month isn't even over yet!

Here they are, in all their grizzly glory: 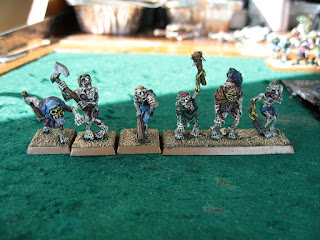 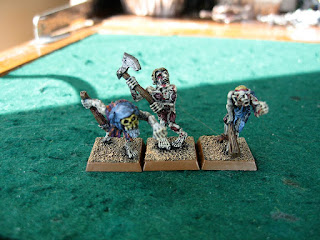 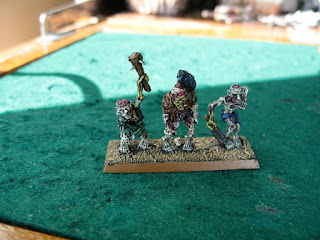 Apologies for the lack of staging, but the scenery is in a cupboard which was alarmingly close to my sleeping infant daughter. It wasn't a hard decision to make: you'll just have to do without staging. Let sleeping infants lie...

In related news, however, things are lining up for my first physical game of warhammer 3rd edition since, well, 1992?

If we take a look at Skarsnik's player finder, we might note that there is a man the local sheriff knows as 'Andre': 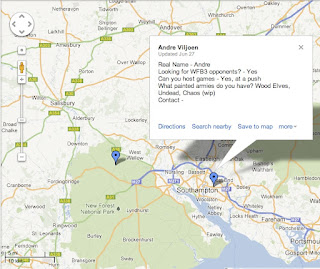 I'm located at the other pin. We've been threatening violence towards each other for months, but jobs, kids and other real-life activities have thus far prevented our joyous slaughter. But, on Monday, the 27th Day of September (EDIT:August, you retard...), I shall scrounge whatever painted items I can find, mash up some sort of army list and deliver twenty years of pent-up frustration to somewhere South of Hampton.

So I'm trying to get as much stuff painted as I can. Hopefully, I'll post up the list by the following weekend. I also have a secret fantasy that I might actually produce something for the Golden Gobbo - which is still unpainted, unbased, unmounted and, well, un-thought-of. What a backstory, should that entry be able to mark its (his? her? Its? I'm not telling!) debut with glorious slaughter on the field of battle!

But, no promises. New Dad. Still got twenty months before I can't use that anymore...