Now I'm a guy and if you're reading this, you're probably a guy as well, right? I'm safe in this assumption because oldhammer is surely the very richest cream of an already elite variety of nerd. Don't believe me? How many people alive actually know the story about the Dragon Company?

See what I mean?

And it seems fair to me based on my experience that if you're interested in elitist nerd activities, you're probably a guy.

Back to the emotions. Now that we've established that you and I are both gentlemen, we can further assert that emotions are therefore unwelcome. Need a hug? Go see your mom. Need a game? Now we're talking. Need a rubdown with some oil? Er...okay. Maybe not that last one.

So, having read my last post again, I want to apologise for the emotional content. I was depressed and needy. Having tracked down every lichemaster figure, my life was suddenly devoid of purpose. I guess I'll just have to focus on raising my daughter or something now.

Anyway, in spite of my rollercoaster emotions, there was still time for many things.

First up, I've been painting. Not Lichemaster. Not goblins. Not chaos. Not even undead. 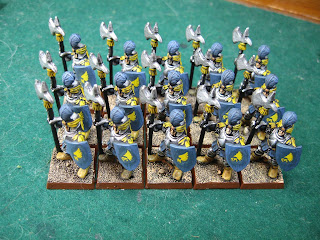 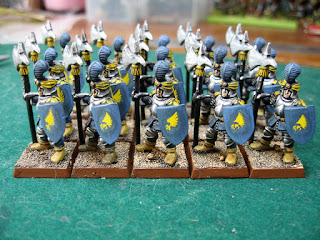 Let me explain. A little while ago, I discussed exactly how far taking some already painted miniatures and just rebasing and washing them got me. I described this approach as 'tactical'. It essentially changed the entire direction of my painting efforts, throwing the successful completion of my Undead army into disarray and confounding my efforts to further develop my Chaos army.

That didn't matter, because I was going to get goblins. And I loves me some goblins.

So that's one part - knowing that getting some reasonably painted figures would get me further along then if I started from scratch.

The second part was that for some unknown reason, I suddenly became very interested in dungeoneering. No, I don't think its  a word either, but if you can use Slaanesh in a sentence, you can probably use dungeoneering, so bear with me. Actually, now that I think about it, everyone else would call it dungeon crawling. I've always been taken with dungeoneering, both from my D&D days and from GW's own Warhammer Quest. Given that Warhammer Quest tends to sell in the region of £150 on eBay, I decided to start building my own. And, of course, what that needs primarily is a party of adventurers.

I've already built the adventuring party, but I will reveal them as they are painted, because that we don't want to see more pictures of unpainted stuff, right?

The third part was that I started thinking about a scenario, which led to me thinking about a potential game and battle report where I could use my goblins against this adventuring party. Whilst that would tell a good story, it then crossed my mind that it wasn't big enough. I wanted bigger. I needed to get another army in a hurry. Just the start - the same as the plastics in my goblin force, to help the army start. That new army could then host the adventurers - you know, when they weren't off actually adventuring.

That led me to eBay, where I was searching for cheap 'goodies' that had already been painted. I stumbled across a a huge plastic lot with some painted halberdiers and a whole herd of the creatures from Warhammer Quest, so that was a total win for about £10. I liked the monopose plastics and I thought they would compliment the monopose goblins I had. Quaint, but true. And I thought they were oldhammery enough (for me) to qualify, popping into existence in 1992, I believe.

Unfortunately, the halberdiers were so dreadfully painted that there was absolutely no salvation for them. All my plans for a quick wash and base evaporated the minute I opened the box. Too late, though - I was a man possessed - I must have this battle. They would have to spend some quality time with my good friend Dettol, after which I would have to repaint them. My tactical plans had fallen through and I needed to get these chaps painted in a hurry, because I needed them off my painting table so I could continue my strategic painting.

Of course, your rational mind (the same one that compels you to say things like 'I wouldn't do that...' or 'that was stupid...' to movie characters) is nagging you with a question: Gaj - why don't you just put the halberdiers over there and then put your strategic painting back here, where you can complete it according to your well formed and thought out plans? They're your halberdiers. You can do what you like with them. No one is making you paint the halberdiers, after all.

I don't know. I'm tired. My daughter's energy levels are only increasing, whilst mine leak from my exhausted body, leaving no capacity for rationale.

All I do know, however, is that fifteen of the buggers are done, which is just acceptable enough to my OCD engine to allow me to move onto some members of the adventuring party, which weren't part of my strategic painting but now are (as opposed to the halberdiers, which are strictly tactical).

Anyway, to make a long story short, I ended up painting the halberdiers in very simple colours - selected to allow easy painting and washing as opposed to any real aesthetic.

I think they turned out okay.