If you are a consumer of British non-commercial digital writing - say, like this blog, or any number of related oldhammer blogs, you might have found yourself troubled by the sudden and alarming drop in output for the month of July.

July started with wild panic, really. We, in England, all woke up with a new and terrifying entity issuing forth from the heavens proclaiming the end of the world. A large and horrific ball of fire had appeared out of nowhere and seemed intent on burning our insignificant carcasses from the planet. After frantic phone calls to the army, the church and my local MP, I was given to understand that the burning orb of terror was in fact the sun and, furthermore, was supposed to be there.

Rumour has it that this thing appears on a regular basis in other parts of the world. In fact, many assert that a certain amount of exposure to it is actually good for you. As a result, I found the sudden warmth and light quite refreshing - liberating, if you will.

So I, and no doubt every blogger on this island, including our peculiar breed of oldhammerers, have spent day upon day absorbing these health rays from heaven. Absorbing is a busy old task, which unfortunately interrupts the otherwise necessary activity of blogging, you see. We have to look after the health, after all.

Today, however, the sun has elected to shine elsewhere, whilst the more comfortable and familiar blanket of greyness has returned. Happy that the world was back in its right form, what with England being grey and wet, I have settled into the evening with a nice bit of blogging and a cup of Yorkshire tea.

Onto the purpose of the post. It did say Battle Report, after all. You were not mistaken.

So a strange thing happened to me yesterday. The Minister of the Interior declared that she was going to go out and visit some people. And she was going to take the apple of my eye, the heir to my kingdom and the centre of my universe with her. They were to be gone all day.

Now I confess, dear reader - I've had dark fantasies about this exact moment. The time when my wife and child were happily amused elsewhere and I was left alone at home - alone with my wild thoughts and desperate urges.

As soon as the good lady had driven out of sight, I rushed into the house, frantic fingers clutching at well thumbed pages, hunting for satisfaction.

It was glorious. It was everything I hoped it would be. And you, good reader, can live vicariously through my experience, because I took pictures of the whole thing...

This is the first time that I've ever played any (non-video) game solo. I know there are many clever ways to implement artificial intelligence and introduce scripts to your 'opponent'. I didn't think I had the time to investigate, so I just played both sides. My rule was simple: when in the mind of each 'player', always take the most tactically advantageous route available. This included awareness of rules, so it sat outside of pure roleplaying and factored in a little meta-gaming. I thought this was the fairest way to challenge each side.

I'm lucky in that I'm either (a) an idiot, (b) a genius or (c) have multiple personalities, because I am able to cut off my predictive planning mind and allow it to explore only the here-and-now, so I wasn't too concerned about self sabotage.

Finally, I promised myself that I would abide by every dice roll - I would not respect the narrative that I hoped for, but rather, find a narrative for the events that transpired. It should be no surprise, then, that the story turned out exactly as it should have. Because I wasn't involved.

My first stage was to print out some old school army rosters. Too late I realised my error: I printed them in colour. What I should have done is printed one in black and white and then photo copied it to get the same look as they would have had back in 1990. Next time. 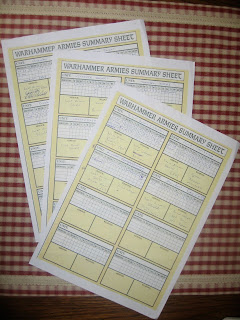 Second stage was to select a range of painted figures that would do. This was done based on what I knew was easily accessible. I only had a day, so I needed to keep it small. I didn't care about points (I still have no idea how many points the things I chose cost) - I tried to create something that just looked right. And, of course, the soldiers I had available were a natural limiter - you know, like real war.

Just so you know, I randomly determined the presence of characters, their equipment and their levels. The only place I intervened (as GM) was with Grommbo and Victoria Seacrette - I set their levels at the start.

The battle centres around the small farming village of Mourning Glory. The village is an isolated community about two days ride from the nearest fort, so it doesn't enjoy much protection from its liege lord, Count Tuten. As luck would have it, when the goblin horde of the Brothers Gromm attacked, a small patrol of the Count's men had just arrived. They helped to evacuate the village before taking position at the entrance of the village. Fortune showed more favour to the residents of Mourning Glory: two hardy adventurers were also staying there, recovering from their latest dungeon exploration. Being brave and forthright, they agreed to help defend the village.

These, then, are the defenders of Mourning Glory:

The Goblin Horde of the Brothers Gromm uses the term 'horde' fairly loosely. That said, what self respecting goblin general would refer to his force as a gang or a club? Headed up by the curiously cooperative Brothers Gromm - Grommble and Grommbo, the tribe have found themselves on hard times. Many weeks ago, the brothers directed an attack against what they thought was a small and helpless trading post on the coast. What they had encountered, however, was a shipping outpost established by the Sea Elves. It is a well known fact that goblins find the mere presence of elves quite disturbing and suffice it to say that the attack was repulsed.

But the brothers had not factored in the vengeful nature of the elves. Shortly after the attack, Grommble and Grommbo realised they were being tracked by contingent of Sea Elf marines - fast, motivated and well equipped.

The goblins, having already lost most of their resources in the defeat, were desperate for supplies - they could neither evade nor stand against the elves in their present state. Thus, the brothers Gromm elected to attack the first village they encountered - Mourning Glory as it happened. Hopefully, they would be able to resupply and establish a solid defence - enough to deter the elves from an attack.

The Marines of Toylette Duc have been in hot pursuit of the goblin menace for just over a week now. They had only been stationed at the outpost for three days and it was evident to Commander Bhondd that the knowledge the goblins had of the local terrain was the real enemy - the elves were close, but never close enough to engage.

Commander Bhondd suspected that the goblins were pressed for resources, for despite the mess they left behind each camp, it was nowhere near as much as he had experienced with other greenskins - a breed especially wasteful and careless. They must be desperate if they were eating what they themselves would normally throw away.

The Marines gambled that the goblins would therefore head for some sort of supply base - their charts indicated that the nearest obvious point would be the human hovel of Mourning Glory. That's the place, thought Commander Bhondd. This ends there.

Of course, you will notice that the figures employed for the elves are not the beautiful classic elves of the period that I have secreted around my house. Rather, these are the painted 6th edition elves I had from my previous life as an immature gamer. Painted, I reasoned, was better than unpainted, and present better than not-present. If it makes you feel better, I have enough classic elves to replicate this force - they're just not painted (yet).

In the next post, we'll see who stands firm at Mourning Glory!