I've discussed the merits of tactical painting before. In that post, I reveal how by simply lowering one's standards, one is possibly able to engineer a whole new army - sort of like the one I did.

Following that rationale, I then got myself into some trouble, because my master plan to purchase more painted figures and get them tabled quickly backfired, leading to me landing a bit of a painting 'debt', really. And having painted fifteen of the sods, I was only half way through that debt.

Those fifteen were painted in May.

But, as 2013 zips up its trousers and gets up to close the door, I find myself able to scrape a tiny, moral victory against it: I've painted the rest!

That's right, 2013 - screw you and your evil machinations!

So these are they - painted, based and gloriously monopose - very much like their goblin predecessors you see pictured with them: 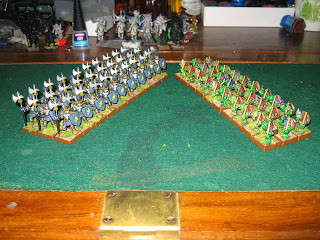 ...and, because it seems to work for major retailers and fast moving consumer goods companies, I've taken the same product and adjusted some minor detail (picture taken without the flash), thus somehow suggesting extra value for the same price: 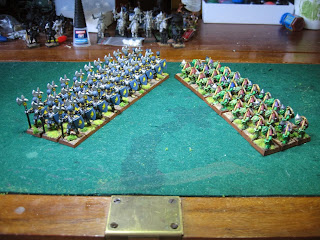 So now I have the seed of an Imperial (or at the very least, human) army.

As anyone who takes pictures of miniatures knows, the camera tends to be quite forgiving of bad paint jobs, and quite punishing of good ones. I'll let you draw your own conclusions here, but let it be said that I think the pictures, far from saying a thousand words, are possibly lending a hand. Perhaps in the region of one thousand one hundred words? One thousand two hundred? Suffice to say that the camera has been very generous this time.

Essentially, the figures have been very badly stripped, very badly cleaned and painted in a desperate rush using the simplest colours and painting discipline available. Black wash (Nuln oil, I believe the thing is called) was my ally here, highlights have hardly been done at all and the whole thing relies on the high contrast colour scheme bamboozling your eyes and guiding you away from everything that is wrong.

Still, don't let my self deprecation stop you - I will happily bask in your praise.

Thrilled as I was with this ostensibly final victory in 2013, I then leapt into action and produced some command figures - using up the last of the Battlemaster halberdiers and using some of the swordsmen figures. Specifically, I produced two captains and two banners, leaving me with a grand total of thirty four painted figures - just enough to split into two units of...seventeen men each.

That'll never do, so here's a picture of two units of eighteen men - each featuring a brave hero! 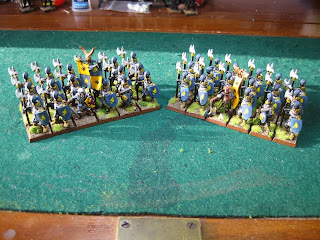 One of the things that has been sitting at the back of my mind as I've been working through this lot is that there is nothing expressly compelling these chaps to be 'good', as our naive black-and-white world view might like.

So I left a little tie-in, should I require it, by re-using the deaths heads on the banners, as I've done elsewhere. Implications on a post card, please.

And, if not used in the implied fashion, the fact that there is a lovely seed to an Imperial force will allow me to do more fun strategic painting (like cannons and knights) for the army whilst it grows, safe in the knowledge there is at least a core with which to do battle.

On a final note, know that these chaps will not feature in Terror of the Lichemaster - I have all of the required imperials in trustworthy, solid metal. These chaps are just a stop gap that made it to the front of the queue because I tried to take a shortcut and failed.

But, in completing them, not only will I advance my goal to one day play out that complete adventure, but also, that my fledgling Imperial army will grow by forty heads - taking us right up to that magical seventy that, as regular readers will know, is the entry criteria for a force to be considered an army.

Actually, on the final final note, may I wish all of you a merry Christmas. I know its already passed, but apparently, its the thought that counts (lets see how far I get this year with HMRC on that one...).

Should I not see you before the new year (I have an almost-two-year-old, so why don't you just wind those expectations down a notch, eh?), then I also wish you a Happy New Year.

Email ThisBlogThis!Share to TwitterShare to FacebookShare to Pinterest
Labels: Empire