In the spirit of my newfound mediocrity, I finally scrape around to the next installment (pre-installment?) of Skullzinschitte. I will finish this report!

Dieter pinched the bridge of his nose, closed his eyes, and shook his head. He stood like that until silence filled the barn. Sighing, he opened his eyes again.

Sasquatch was lying down, his eyes alert and hopeful. Beneath his colossal paws lay the collapsed remains of a spinal column and a ribcage. Seeing Dieter looking at him, Sasquatch snatched up the nearby skull as his bulbous tail began to thump on the floor.

Suddenly, Sasquatch raised his hindquarters, his sting flailing from side to side as his anticipation grew. His teeth clutched at the skull, snapping again and again, daring Dieter to take it from him.

He put his left hand on Sasquatch's muzzle, before wrapping his right hand around the skull in the giant beast's mouth. The manticore's teeth clutched at the skull in anticipation, the bulb of it's scorpion tail crashing into the floor on each side as it wagged.

In the blink of an eye, Dieter wrenched the skull from Sasquatch's jaws, cast his arm right back and hurled the skull through the door of the barn. A cacophony of chaos followed as Sasquatch railed against the floor, his claws desperate for purchase, trying to turn his massive bulk to chase the skull which had flown over his head. His wings spread and he roared at the thrill of the chase. A cloud of dust followed the spray of hay and stones as the beast crashed through the barn exit. Both wings slapped against the barn walls as it passed through the exit, causing the whole building to shake.

Then it was gone.

Dieter smiled as he spied the creature gnawing and clawing at the skull before batting it off into the distance to chase it. Then he looked down at the scattered bones that were all that remained of the skeleton Sasquatch had mauled moments before.

Ludwig shrugged. "I think you make it hard for youself," the vampire replied, a brief smile crossing his face. "Personally, I find the whole notion of a manticore repugnant. They're stupid, vicious, smell-"

"I'm not talking about the manticore!" Dieter barked. "It took me two weeks to train that bloody skeleton how to groom Sasquatch! He screws it up just once and gets his head ripped off as a result, leaving me with having to bloody well train another one!" Dieter spread his arms in frustration. "What I don't get is why necromancy is so terminally bloody difficult? Has no-one found the means to summon intelligent skeletons yet?"

"They don't have any brains, Dieter," the vampire replied, his voice level. "They are splendidly stupid, which is surely why they excel as servants?"

"It's just that Kadon and Nagash were all on about the benefits - the eternal life, the unbound power, armies that needed no sleep or food..." Dieter sighed. "They didn't say anything about the fact that the undead just collapse all the time. Or that zombies carry on decaying. Or that skeletons are just so fantastically stupid that they can barely walk in a straight line, let alone swing a sword!"

Ludwig smiled. "Or groom a manticore?"

Dieter shot the vampire a pained look. "Yes. Or groom a bloody manticore. I mean, why do they even need grooming anyway!"

"This is what I'm saying, Dieter. You make it hard for yourself. You could just use a horse like everyone else."

"A horse? A horse! I'm the Doomlord, I am! Not some common necromancer without the wits to even  summon a monstrous steed of some variety!"

"You do know that the a skeletal steed can go through walls?"

"A manticore can go through walls just as well, thanks very much!"

Ludwig shrugged. "It's just, well... y'know..." The vampire trailed off with a dejected gesture to the manticore, which was now chasing its tail in a storm of dust. "It's not the sharpest tool in the shed, is it?"

The two turned to face the speaker.

"What is it, doctor?" Dieter asked.

"It's the zombies," Dr. Darkington-Black said. "They're starting to collapse. We need to get some more. I fear we've rested too long."

"See?" declared Dieter. "See? I can't stop for ten minutes before I've got to go and rebind some or other stupid undead thing. I should be taking over the world with all this unstoppable power I supposedly have, but I'm constantly raiding stupid little villages trying to get some undead that will stick together for two weeks without some kind of maintenance!"

Dieter removed his skullcap to scratch his head. "What's next on our shopping list, then?"

Dr. Darkington-Black produced a faced map. "If we travel north-east, we'll hit the village of Skulzinshitte. If we leave in the hour, we'll be there just before nightfall. Murder the villagers, raise them all up, I'm sure we'll be done by midnight and you'll be able to have a good night's sleep, knowing your forces are filled with, uh, fresh blood. Yes. Fresh."

Dieter looked at Ludwig, who nodded.

"Fine. Doctor, prepare us for the march.  I'll get Sasquatch ready..."

Hornlust Sinbiter clutched at his head. "Please make them stop."

Irongrind Dragonhacker didn't say anything. He'd long since found that the passed much better if he didn't engage Hornlust in any direct conversation. For a follower of Slaanesh, who, Irongrind was lead to believe, was a god that made every experience super delightful, there was an awful amount of complaining coming from his champion. Either, Hornlust was full of crap, or indeed, his deity was full of crap.

Iron grind raised an eyebrow to the sky. Come to think about it, they were probably both full of crap.

"Will you lot just shut up!" Hornlust barked at the singers.

What Hornlust's misguided god had clearly failed in was to provide the wittering idiot with any sense of appreciation for a marching song well sung. Surely, if he'd spent less time with the coconut oil, the fire shrimps and the oar, he'd finally learn to appreciate the plague bearers and their cheery delivery of  rhythm to the army.

Irongrind grinned inside his helmet as he slithered along to the beat. At least his god had sent some daemons.

Count Mordrek spurred his steed on, coming alongside Irongrind. "Skullzinschitte is just over the rise."

"Finally indeed," Irongrind said, his eyes settling on the scruffy goblins that were waiting in the lee of the hill. "Well? Are we in time?"

The goblin shook his head. "We are not, m'lord. I'm afraid the Doomlord has already visited..."

The goblins's dirty face broke into a grin. "But he hasn't left yet!"

"Really?" said Irongrind, looking at Count Mordrek, who nodded. Irongrind slithered forward, passing between the gap the goblins created on his approach, and slowly dragged himself up the hill.

It was indeed true. There, ambling as only the undead do, were the late citizens of Skullzinschitte, their bodies and souls already claimed. Equally, there stood skeletons and even mummies, all quite motionless.

But in the centre, on the single road, he spied the Doomlord's banner.

"You are harvesting in fields that are not yours, Doomlord," Irongrind said under his breath. "And I have come to collect the master's due..."

I randomly determined who got the village (the Undead) and then crafter the story around that. Once I had an idea, I then decided that the only way I couldn't 'outplay' myself, was to completely deploy the undead, without knowing where the enemy would come from.

Then, I randomly determined the direction the Chaos force would come from, giving them the advantage that they could deploy based on the disposition of the Undead. 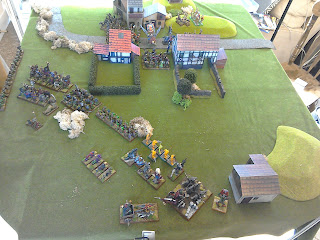 The real problem the Chaos force would have was the inaccessibility of the town, surrounded as it was by hedges, with well defended bottlenecks.

My plan with the undead was really just to use the natural bottlenecks of Skullzinschitte to prevent the chaos forces from really leveraging any support. What I couldn't know was where they were coming from, which meant that I had to split my elites (the mummies and the wights) so that each was on one side of the village. I also realized that once they were on one side, their chances of getting to the other side (with a movement of 3" and no march move) was pretty much will, so I'd have to make do with just one elite unit. 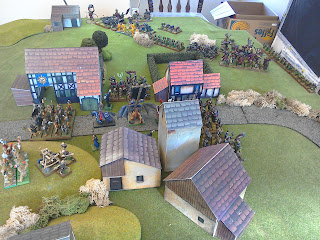 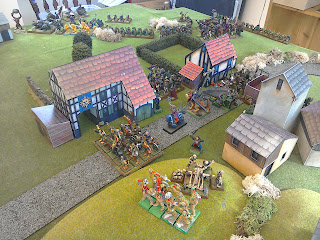 It was my bad luck that the chaos force turned up on the opposite side of the mummies, who would now pretty much be excluded from the battle... 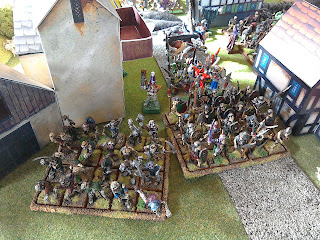 Still, the wights had Oppa-ra in support, so perhaps it wasn't that bad. 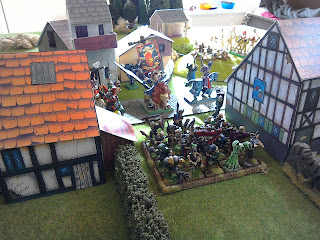 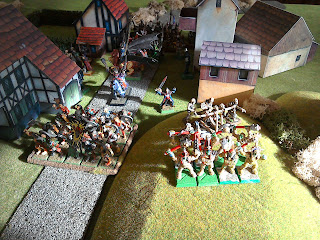 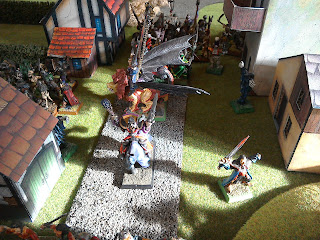 The Doomlord's manticore sits crouched in the centre of the army. 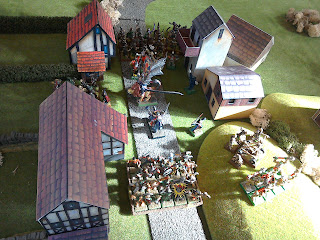 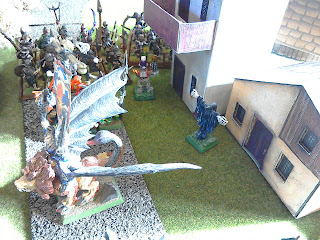 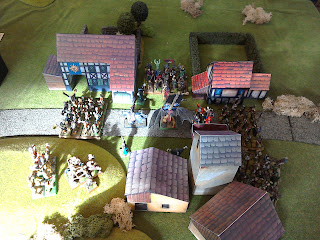 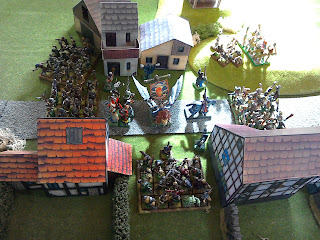 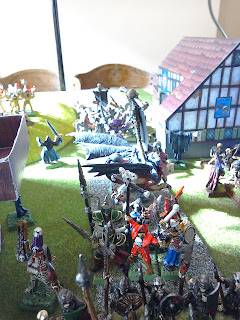 The Chaos deployment was actually a bit of a mess. Although they were able to deploy in open space, the bottlenecks around Skullzinschitte were just punishing.

The other problem was fear. Of course, the undead have always caused fear, but fear in 4th edition was, well, terrifying. Powerful units like the chaos knights could easily be slaughtered if they lost a round of combat because of outnumbering and there are no pushback and predictable break moves like in 3rd edition. You roll dice to see how far you go, and if you get caught... 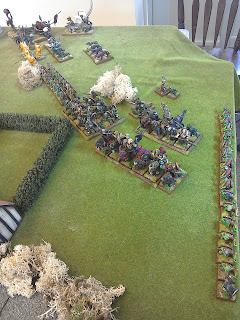 So that's why the daemons and the trolls lined up to go into the town through the easy route. The daemons were immune to psychology and (I thought) all had magical weapons so could actually deal with the Wraith (the champion of the unit between the hedges) and were themselves immune to psychology. 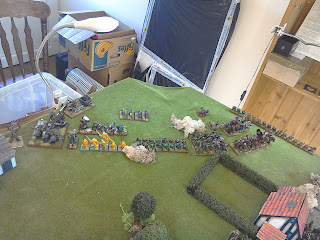 The trolls were really there to lend a hand 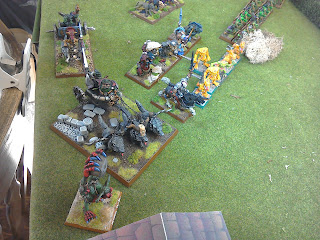 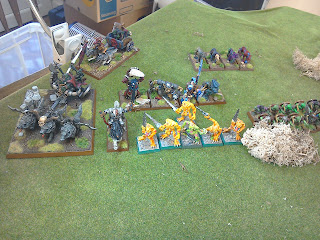 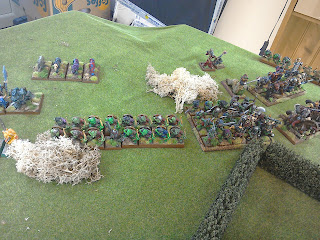 The goblins were actually just in the way. I wanted them in a wide formation so they could shoot, but equally, I wanted my forces to get stuck in. I also didn't think they would be effective in hand to hand, but still couldn't deploy easily to get them all shooting and shooting well. 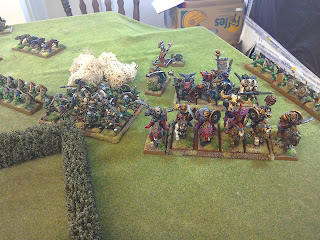 Ahh... chaos knights. So much more fragile in 4th edition... 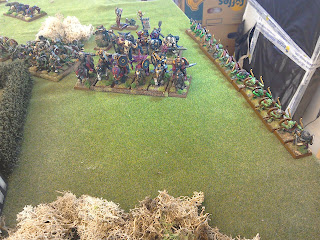 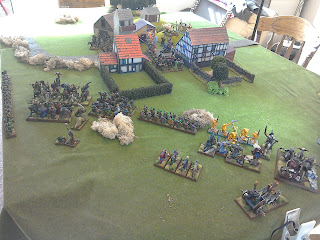 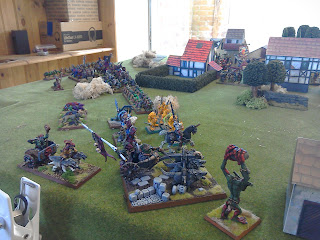 I reasoned that Grom and Broggin (the stone troll) would be about as fast a flanking force as I could muster and should easily be able to get around to the road to get into the town from the east. This, plus the fact that they could easily get the charge against the undead and that chariots are devastating in 4th compared to 3rd, all made a huge amount of sense.

No really. It did.

The forces are deployed and we're ready for the frightening brutality of Warhammer Fantasy Battles 4th Edition. See if you can guess how many turns the battle lasted...