Battle Report: The Vampyr of the Riding: Turn 3

Let the map be evidence that the poor Plague Bearers managed to slog their across nomansland and to the other side of the river. Of especial importance is the fact that Mihartiskaphut remained still, looking to capitalise on the impact of the terror tests the Manticore would cause in the dwarf turn.

So remember that thing about dice with hard-to-read pictures? Here's two more dice. What's the context? The context is that Danni managed to cast Vanhel's Dans Macabre on the Reapers.

He used that to cause the Reapers to charge the Longbeards.

We weren't sure if we should roll fear or not (the charge happening as it does in the magic phase), but the impression we came away with was that the spell enabled a move or a charge move (amongst other things) which would have the typical reactions available to it.

So, I rolled for fear. The target number was 10 or less. I scored an epic double six, the Longbeards pretty much accepted they were too old for this shit, promptly voted with their feet (52% voting leave, 48% remain) and rolled a spectacular nine for their 'tactical' withdrawal.

The Reapers didn't have the range to catch them, so their charge petered out into an uneventful, albeit enthusiastic, shuffle.

Also, remember that terror test the manticore wanted to cause?

The dwarfs passed them.

Turn 3 was, quite literally, pivotal for the dwarfs. The Household Guard charged the Chaos Warriors, before the Longbeards (who had rallied) and the Thunderbuckle Light Brigade pivoted to get the Manticore into their charge arc.

Everyone has eyes on the hill, though. It's almost as if they'd all seen a battle from a long, long time ago in a galaxy far, far away, where the high ground was particularly advantageous for those looking to retain their limbs... 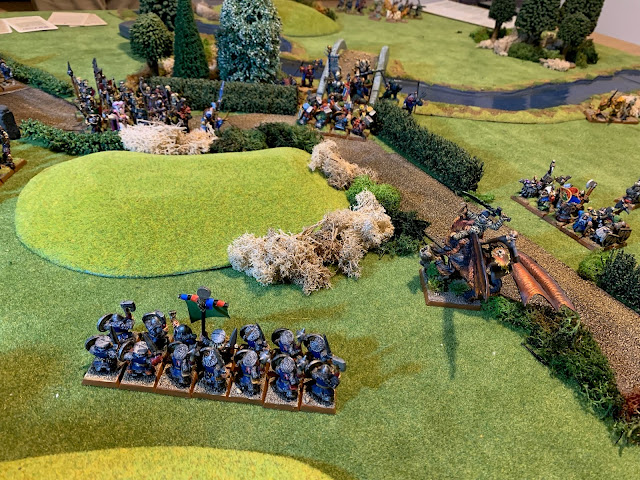 Fortunately, Big Jessie's crew had managed to get their shit in order, interpreting the mystical sequence of powder, ball and fire correctly and placing a direct hit on the Manticore!

The ball hit the manticore (as opposed to the mummy), but was only able to deal one wound to the powerful animal.
In other news, three more plague bearers were shot down in cold blood whilst going for an afternoon stroll in the eastern fields. This brings the total number of plague bearers murdered to eight, with the police still investigating. Reports indicate the murders could be linked to an altercation between some dwarfs and undead earlier in the day. Police are calling for any witnesses to step forward. 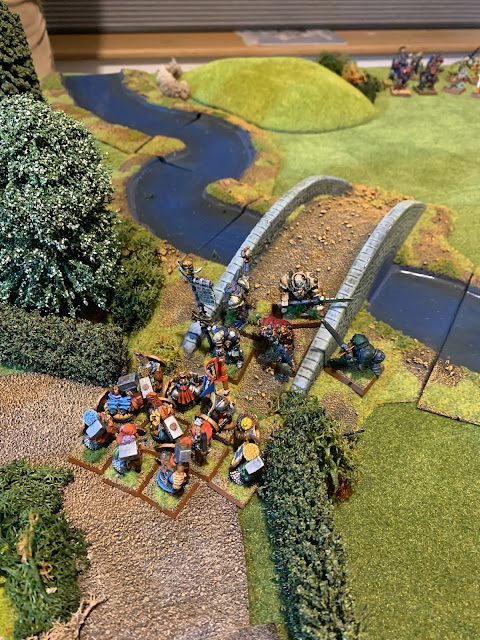 Hesior and the Household Guard hit the chaos warriors hard. Given their reduced frontage of four and the use of double handed weapons, the fact that three chaos warriors were killed should not be wasted on the reader. The Hateful Eight (well, Five...) were able to kill a dwarf in response, but the rapidity and efficacy of the dwarf charge ultimately overwhelmed the overconfident chaos warriors and they fled. Fortunately for them, they were easily able to outpace the hammerers, who only made it to the middle of the bridge in pursuit.

Not pictured here, but visible in the next turn, is the successful cast of The Bridge of Shadows on the Thunderbuckle Light Brigade, giving them a full tilt charge at the manticore! Channeling our inner Lord of the Rings again, we are reminded of the time when Aragorn is asked to hurl Gimli at the orcs because he can't cross the distance himself. Founded, then, in that long but unspoken understanding between Men and Dwarfs, Elrich easily understood the enthusiastic gestures Bofel the Wise was making, and supplied the necessary boost, allowing the Light Brigade to get in on some manticore action!

Join us next time for the Turn 4: The Final!