Goblins! And a new Contributor! And some RoC Credentials!

Oldhammer day. It's coming soon. I'll tell you more as I work it out.

In preparation*, you may have noticed the vast hordes of chaos churning out their warbands. Now, I have plans. There are things forming in the material plane a the very limits of my vision.

And, of course - let us not forget Ellen Degenerate. Perhaps you remember her? No? Her path to chaos was forged in the defence of the Wyemm Seeyay. Unfortunately, you'll have to read the whole thing to chart her descent into madness. She'll be tricky to model, but with a warband currently consisting of exactly one (1) goblin, it should be easier to get her on the field than some of the other warbands out there.

But that's all for another time.

So, when I did those 30 plastic goblins, it was more than my poor soul could handle. I had been led into  temptation and there I drank deeply from the cup. It was green, friends. Green.

Now I must have goblins. Bearing in mind that there is still some tactical use of my existing figures, I can currently throw around 40 goblins, a few warmachines and, of course, Grom, at the table.

This is the expansion plan: 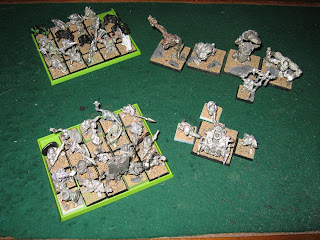 Specifically, it is 18 goblin archers, 18 goblin warriors, 2 wizards, a leadbelcher, a goblin battle standard bearer (in the shape of the goblin king - I have other plans for his chariot) and 4 trolls. One of each sort.

I do have other goblins, but they are from the 4th edition. As lovely as they are, I thought I'd have a go at the 80s ones first and then determine the future for the '92 night goblins and common goblins that I have. This cluster you see here was just enough to satisfy the 40 goblin requirement expressed for the orc&goblin army in Warhammer Armies (including the infantry Groms).

In related news, allow me to welcome Andre Viljoen as a contributor to the blog. As he's already introduced himself, I can simply go on to say that he and I have indeed had a few games of the ol' 3rd edition. Three to be precise.  Having now acquainted ourselves with the rules, we're going to have a go at a campaign. It'll be a narrative campaign - no complex campaign rules just yet.

But, as he has already mentioned, there might be goblins involved. Those above, to be sure.


*Not that Oldhammer day is all about Realms of Chaos. Its just that RoC turns 25 this year. Regular warhammer will feature too.
Posted by Weazil the Wise at 15:17