Part of my day job is to look at opportunities to re-use things. So, when things are made, how do we make them so that they could be reused in different ways by different things, you see.

So it was when I selected Albi and Antonio to be the first up to be painted.

Firstly, I thought they would be quite easy to paint, so that was a plus.

Secondly, I thought they looked like suitable adventurers, should such a thing be required.

Thirdly, I remember the old AD&D range that Citadel released where they would release a thief or fighter pack or whatever, where each pack had three figures in represented the various levels the characters would be at.

And finally, as I must build a fledgling Imperial force to support Phase 2 of the Lichemaster project anyway, they could serve as characters (or even just warriors) in said force - when I get there.

Oh, and of course, that means that I'm two steps closer to completing the second phase of Terror of the Lichemaster - painting the characters.

Anyway, here they are: 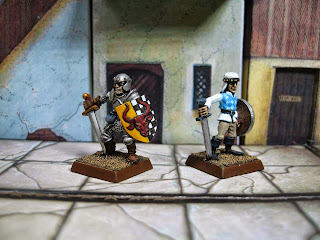 Obviously, Albi is a fighter. No-nonsense shoot first and ask questions later sort of chap. Antonio, of course, is a lover. I figured him to be the type to spend a lot on designer clothing in order to impress (hence the Pringle jumper). 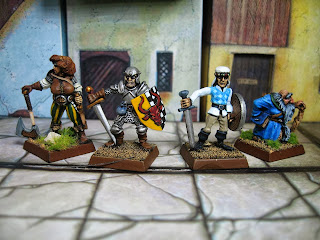 Seen in the context of an adventuring party, I would see Antonio as the rogue type of character, something along the lines of a conman or a bard. I don't think we have any doubt as to what Albi represents in the party, which would make Victoria some sort of ranger, with Dumbel still being the party wizard. Maybe later I will try to generate WFRP characters for them.

In other news, I seem to have started a dark elf army: 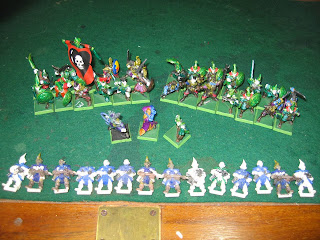 You know, because everyone needs dark elves.  And no, I didn't paint them.
Posted by Weazil the Wise at 03:56

Email ThisBlogThis!Share to TwitterShare to FacebookShare to Pinterest
Labels: Terror of the Lichemaster