Having pried open the history of the various gaming compatriots at the club and in my immediate vicinity, I was horrified to realise that I alone had experienced the joy of 3rd edition - the most experienced of these poor bastards could only make reference to the 4th edition...they could go no further. My friends, it is a horrible, horrible feeling to be alone.

My plan, then, is to engage in powerful, passionate, inspiring, invigorating, galvanizing evangelism! How can these poor sods possibly know the full joy of Warhammer 3? I shall have to bring it to them, of course!

Which leads me to last night. I thought that instead of going to the club armed with figures, I would bring literature.  More specifically, the 3rd edition rules. The plan was basically this - watch a game of warhammer, moan about how stupid the magic/army composition/fear rules were and then launch into a carefully prepared sales pitch on the sheer brilliance of Warhammer 3.

I showed them the following: 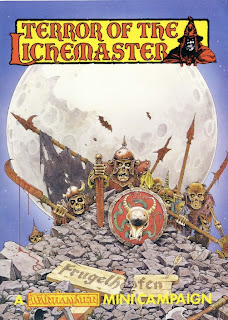 Some of those Warhammer 4 players recalled Heinrich Kemmler, and nodded sagely to themselves as they recalled an Undead army before the days of the split - when Vampire Counts and Tomb Kings were created to cause catastrophe amongst established undead armies everywhere. Of course, how could they know he had a 2nd edition Warhammer scenario all about him... 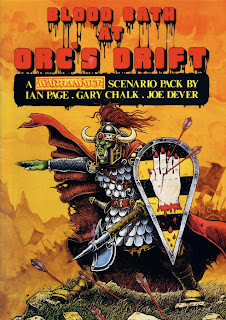 Interestingly enough, a lot of players seemed to recall The Battle for Orks Drift - a Warhammer 40K scenario. 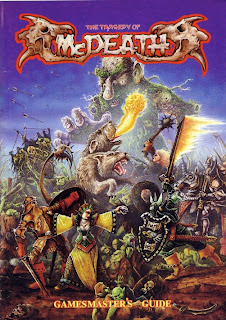 No one could draw any frame of reference to McDeath, but the writing is good...

Of course, I also showed them the Warhammer Armies book. Imagine their surprise when they realised that there was a time (before the current GW Army Book roll-out) when all the armies, and the allies, and the mercenaries...were all in one book. I think that single fact impressed more than anything else.

Well, until they saw the Chaos Warriors: 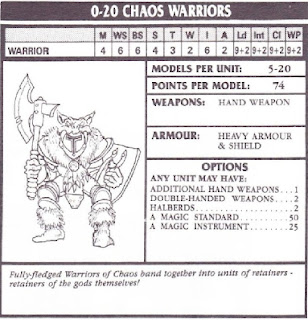 The other thing that really stood out for the youngsters was the fact that the Slann were actually a whole army.

Anyway, I think I've started grooming a follower. Who knows, perhaps I'll play 3rd edition with someone before the summer!

* Of course, you can still use modern figures to play 3rd edition. If you must.