In my second post ever, I mentioned how, in open rebellion, I decided not to buy the new Orc & Goblin army book, but use that same amount of money on eBay to get some classic figures. Then I owned up to spending a little more than the cost of the book.

To add to that, someone I know happened to have some old lead soldiers and 'he knew I was interested in that sort of thing...would I like them?'

I replied in the affirmative. You know, just to help him out.

Anyway, I finally got around to stripping them all down this weekend. This is the tub of all the stuff: 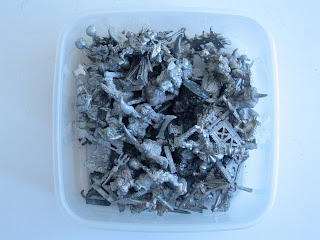 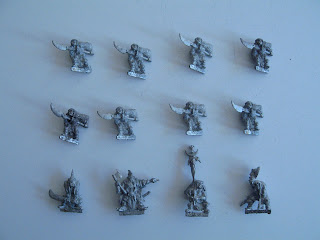 These are Black Orcs. In the Warhammer Armies, an Orc & Goblin army can have up to 40 of them, but interestingly, the units cannot have more than 10 members. Also, only one of the units can have halberds.

This is the other Ugezod pack I got - Mighty Ugezod's Death Commandos. Initially I thought this was a later release than the one above, but I now suspect that this was the first pack out, and the one above was produced later. Either way, I have both units...minus one Shylob Carcassbreath, the hobgoblin berserker. Everyone else is accounted for: 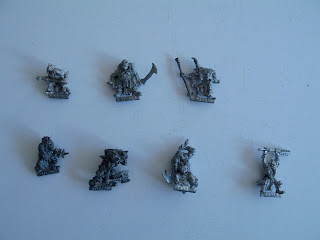 I should be able to use these two units together to seed two units of Black Orcs, or even have one seed a unit of Big'uns. 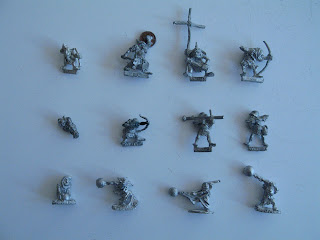 The four at the bottom are all pre-slotta fanatics. The middle row has some oddities. On the left is the tied up goblin that comes with the Gob-lobber. On the right hand side, are two orcs, forming a bazooka unit, of all things. I'm not really sure what to do with them, to be honest. A small part of me says I could use them as a Chaos Dwarf bazooka team via the Chaos Allies contingent. Hmmm...

Speaking of Chaos, these are my acquisitions in that area: 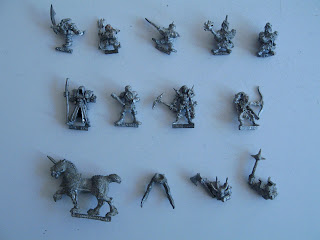 The top row consists of Chaos Dwarves. The top right is a damaged version of the one to his left. The second row contains, much to my surprise, one Kaleb Daark on foot miniature. When I got him, there was so much paint on the figure, I actually thought it was a dark elf. I'd never even heard of him before. He's not as chunky as your typical Chaos Warrior, but nice to have none-the-less.

Most importantly, (for me, anyway) there is now a Chaos Knight in my model collection. One down...four to go.

There were some other odds and sods, but nothing too relevant to the armies I'm forming.