Battle Report: The Bridge Over the River Chai - The Rules of the Game

The game will be played out on a 4' by 6' table, which is depicted below.

The Percolator is carried in a small chest which is being transported in an elven warwain (a four horse chariot). The Wood Elf contingent has been tasked with protecting the warwain and the Percolator. The Wood Elves are descending into the Chai valley from the north. The chariot is not present in the Wood Elf army list, as this is a GM controlled unit - see the Rules below.

The Dwarves are waiting for the elves on the southern side of the river Chai and have set up camp. Of course, the Dwarves are here to collect the Percolator from the elves. Remember that Dwarves and Elves are uneasy bed-fellows (except, of course, for the ill-fated lovers Fasten Luuhs and Testo Sterone!). Players are reminded that Dwarves suffer Animosity towards Elves and that Elven characters may never join Dwarf units. In spite of their racial differences, the Elven contingent will require all the help they can get to transfer the Percolator to the Dwarves.

The Orcs and the Dark Elves have elected to separate their contingent commands and try to close in on the Percolator in a pincer movement as it crosses the valley. The Dark Elves approach form the west, with the orcs approaching from the east.

Although the overall purpose of the fight is to secure the Percolator, players are advised to take not of the victory conditions - the holder of the Percolator can still lose the battle! Capturing the Percolator whilst maintaining battlefield superiority is the key to overcoming the enemy in this scenario.

The game will be played using the Warhammer Fantasy Battles 3rd edition rules, and these House Rules. A GM helps the players interpreting or even making up rules if they are needed. 1

Chariot: The chariot transports the Percolator and is a GM controlled unit. The chariot type is heavy, equipped with scythed wheels, counts as having no crew and is running amok. All normal rules apply for the chariot, with the exception that the GM determines all rules concerning damage, direction and capturing of the Percolator. The Percolator can be captured by a character in base-to-base contact with the chariot or at a distance by using magic (like the Move Object spell). The exact rules are determined on the spot.

Below a strategical overview of the battlefield and the available deployment zones. Some of the unit deployments are predetermined by the scenario and cannot be altered. The following conditions apply: 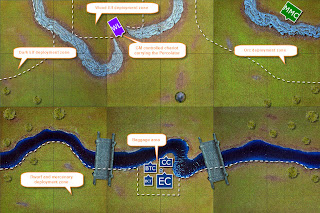 1. Although it is possible to fight a game without a Gamesmaster, it will be much quicker and far easier to fight with the aid of an impartial Gamesmaster (usually abbreviated to GM), see WFB3, p. 35↩
2. The points are used for mercenary payment, see WA, p. 125↩
3. Normally units deployed within the baggage area are taken out of battle, see WFB3, p. 103↩