Battle Report: The Bridge Over the River Chai - Turn 7

And what an interesting turn it is. In the last turn, it was still possible to discern lines - the nominal facing off of opposing force. That goes away in Turn 7. Because everyone runs away. Now its just skirmishing with units.

Oh, and the GM gets sneaky. Control of Master B'tor is 'revoked' and passes to the GM (Dreamfish). If he gets into command range of his units, Thantsants could lose control of the whole lot...

Of course, to initiate lots of running away, one must initiate running toward. This the contestants do with great gusto, launching five charges between them. By the same toke, troops not specifically interested in the outcome of events (that being most of the orcs) flee. Rogaine loses Chamallow's Goblin Command and Suderfed's Big Boys Brigade to the table edge as they scream into the distance.

Rogaine watches as Meedy Ochre, deeming his task to be done, lopes off to the west in search of alcohol and Nico, who he hasn't seen for a little while now.

Kibarkid's Lot and the Lamentable Boworcs have also had enough, despite their heroic efforts, and flee from the Steelaxes - freeing them up to attempt a charge on the Gaversconne's Fireguts. Alas for stumpy legs - the exhausted dwarves surrender the greenskin target to the Ironaxes, who have the same idea - but have the drive, commitment and the requisite 6" to connect with their foe.

In a comedic slapfest, two units of crossbow... er... beings have at one another. Although the dwarves fail to connect, the obliging elves step up, so happily, they meet in the middle. 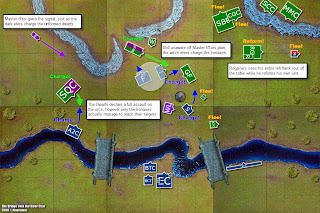 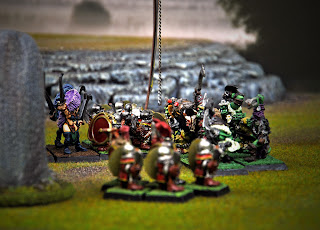 Now, when most of your shooters are involved in hand to hand combat, the shooting phase tends towards the dull.

But! Angry dwarves, having spent most of their turns lost in the mist with no idea of what's going on around them score a direct hit!

Perhaps a scoreline would help to explain the situation:

Not only do the dwarves succeed in destroying the orc warmachine, they bolt thrower also kills two of Rogaine's finest! And some goblins get shot. Meh. 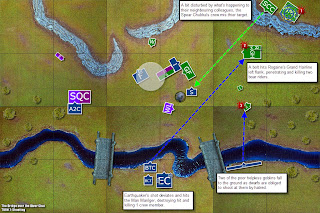 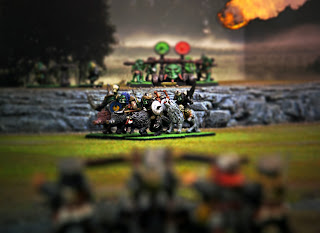 "Lemme guess - a rock fell outta the sky and smashed the arm, right?"

The other orcs blinked at Pannerdol. Nayz slowly pointed to the rock he was balancing on his shoulder. He had been about to lower it into the basket. His mouth opened and closed. "But..."

Pannerdol held a finger to Nayz' lips "Shht! Don't say nuffink! Whaddaya think - I'm some kinda idiot? I goes for a piss for thirty seconds and when I come back, yoose lots gone and broken Man Mangler! Then you- " he poked Nayz in the chest, "picks up a rock and act like nothin's happened! You lot make me sick!" Pannerdol's shrieked the last word at such a high pitch that his voice faltered.

Pannerdol raised his eyebrows. "...and landed in right in the basket, just how we'd put a rock there?"

Both Nayz and Ibupp blinked. "But..." they said in unison.

Ibupp pointed at the rock, now lying in the split remains of the stone throwers throwing arm.

Pannerdol rolled his eyes and flung his hands wide. "Of course! It was the magic rock, weren't it! Mebbe we should all jes' worship it before 'e calls 'is mates and more rocks rain from the sky, eh?" He aimed a wild kick at Ibupp. "Pack it up! We're leaving!"

Right, its been so long that I looked at turn 6, I can't even remember if this has happened before. But its worth knowing, so I'll mention it here.

In 3rd edition, when you charge a unit and you must wheel more than 22.5 degrees in order to connect, your unit becomes unformed. That means that if you are pushed back in combat, you will automatically rout.

Worth noting, because that happens twice here.

The witch elves, flexing the supremely valuable tactical advantage of attacking an enemy in the rear, pretty much bounce like a ball, fleeing in exactly the same direction they came from, after the Ironaxes hand their (the dark elves, that is) arses to them. The big'uns also take delivery of their arses, fleeing in the opposite direction, leaving the bewildered and bloody dwarves stranded in the middle. 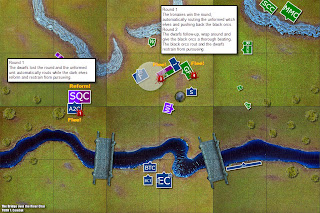 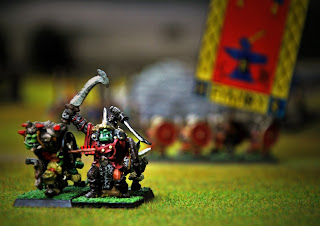 And so, in the beginning of the turn, there were armies. Now, there are just teams. Of most interesting in this otherwise mediocre reserves phase is the sudden interest in Wineghum by both Master B'tor and Rogaine.

Two facts worth noting at this point:


Wineghum feels a shiver down his back... 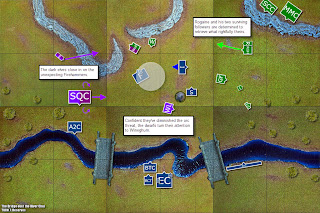 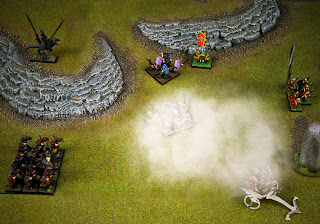 Rogaine sighed. They just don't make orcs like they used to. He understood that the other orcs had run - they were just orcs. But watching Gaversconne lead the three surviving black orcs in an all out rout depressed him. Sure, Gaversconne was an unrivalled plank, but he was still a black orc. Actually, if he was running, he probably wasn't. Half-orc pussy!

All the more depressing was that it looked like it would come down to him to sort it all out again. As usual.

"Right boys, its been a good scrap fer me. Coulda been better. Not so much for you lot, though. We'd have been all over this field if not for you lot running off like that." He waved a hand at the two orcs lying on the floor, connected as they were by a giant bolt. One was still twitching. "That's what running away gets you. As it stands, we're gonna have to go. But not before I get my Percolator."

"Let me tell you how its gonna be," he growled at the remaining two. "We're gonna get Percolator off Wineghum, right? If I gets there and look around me and you ain't right here next to me," - the imaginary spot he pointed at seemed very close to him - "I'm gonna find you. Then I'm gonna pull the bulgy bit outta yer throat. Then I'll take yer nuts in my fist and ram them so far up yer arses that they'll pop out where the bulgy bit was. Then I'll make yer swallow 'em through yer mouths. By doing that, I'll have made a noose around yer jaws, which I'll use to drag you sons-of-bitches all the way back to camp, where I'll skin what's left and stew the lot. Are we clear?"

The others swallowed, emphasising the sudden value of the bulgy bits in their throats. A nervous nod followed.

You might remember this scene from the Wyemm Seeyay - a poor wizard, under pressure, fails their intelligence test because they don't many magic points. Poor Wineghum, suddenly feeling very small as he watches the Witch Elves flee past his position, loses concentration and fails to cast anything useful. 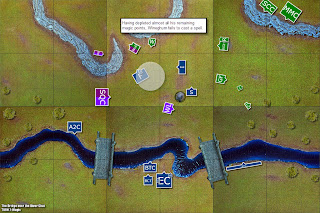 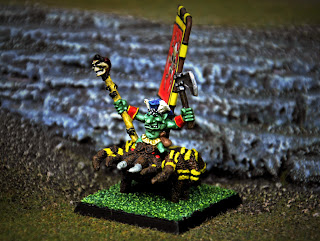