Battle Report: The Bridge Over the River Chai - Turn 8

Turn 8 indeed. Please stand by whilst those new to oldhammer finish convulsing after their aneurysms.

The eighth turn was short and brutal. Again: lots of running. Shortly, you will see a picture describing the moves. There are words on that picture. Six of them are "Flee!" Four of them are "Charge!"

Anyway, this is how the turn started:

The Dark Elves, still under control of the GM at this stage, charge the newly revealed Firehammers as the Mystic Mist that had confounded them so last turn dissipates.

The Ironaxes line Wineghum up for a charge, but their stumpy little legs fail them at the last moment! Failing their charge, the dwarves find themselves stranded between what might be described as a rock and a hard place, where rock=Rogaine and hard place=Wineghum. Both declare a charge!

Now let it be said that the dwarves are renowned for being doughty, stoic and thoroughly reliable - when it comes to the two legged variety of enemy. Wineghum's giant spider, having twice as many legs as the already terrifying horses the dwarves are so suspicious of, scared the shit out of them.

Unfortunately, the same stumpy legs that got them into this mess failed to get them out of the mess as both chargers make contact. Rogaine and his Grand Hareline cull three of the little buggers with their free hacks. 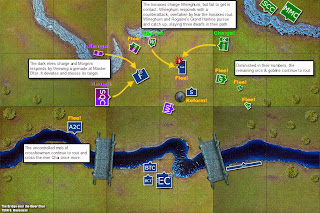 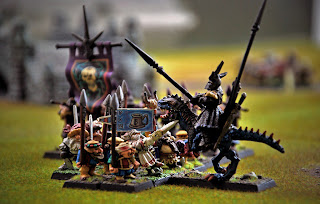 Well - there's not really much to say about the shooting phase. Both the dwarves and the orcs have missile units fleeing. Coupled with the orcs running out of war machines as they have been, they orcs can only offer a poor and desperate bolt thrower shot that swings wide of its mark.

The dwarves, however, claim some scalps by continuing their barrage on the orc artillery positions, killing three. To add insult to injury, a black orc is shot in passing. 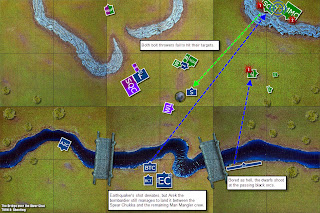 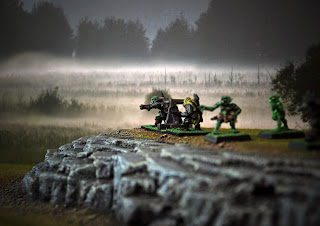 Unfortunately for the Ironaxes (compromised as they are by fleeing) are unable to offer any real resistance to Rogaine or even Wineghum. The dwarves are savaged and dispatched. There were no survivors.

Filled with hatred for Morgrim, Master B'tor wastes no time in engaging the dwarf leader. Vivid manifestations of rage and wrath - sparks fly as the two smite each other. In the end, Master B'tor overcomes Morgrim, scoring a wound on the beleaguered dwarf.

Ultimately, the Dark Elves win the fight, but are unable to rout the dwarves. The elves wrap around, trying to press their advantage home. 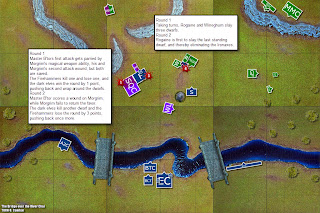 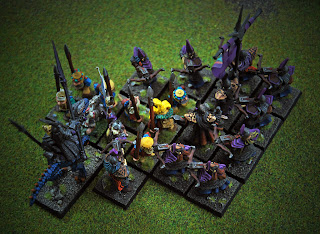 Morgrim planted his feet firmly as he watched Master B'tor lower his lance.

The elf clearly didn't get the message the last time.

Morgrim's ribs still ached with every move and his breathing was laboured. There was no chance of him repeating his previous stunt of taking the lance in the chest.

The commander of the dwarves shook his head. He hated cavalry. But, it'll have to be the lizard, he thought.

With slow deliberation, Morgrim unclipped the pouch on his belt and removed a hand grenade. As the elf kicked the cold one into action, Morgrim casually leaned back and lit the grenade on the cigarillo of one of his dwarf colleagues - this other dwarf nodding in agreement.

Don't fail me now, he thought as he kissed its side.

Using a gentle underhanded throw, the grenade floated through the air, only to bounce awkwardly off a tiny pebble and ricochet down the gradual slope of the field towards the river. Excellent dwarven engineering had produced an almost perfect sphere - exactly the sort of thing that would roll down an even slope well - even with the slightest momentum. So it was that the grenade rolled some fifteen or so feet away before exploding spectacularly and harmlessly.

Morgrim cursed as he watched the dramatic figure of the dark elf punch through the smoke and dust, his murderous intent clear.

We'll just have to do it the hard way, then.

He raised his sword to shoulder height. He could feel the elf searching his face, trying to make eye contact - trying to penetrate the dwarf with his hate and anger. But in order to survive this encounter, Morgrim knew he'd need to concentrate. The real fight here was now with the lizard. Once the lance was out of the equation - well, that was a different story.

Master B'tor relished every uneven bounce of his cold one mount. Cold ones lacked the simple elegance of horses, but the enormous comfort taken from their long strides compared to the violent bouncing of a galloping horse made it much easier to focus on the fight.

He knew better than to expect the dwarf to try the same tactic as the last time. He had felt the impact on the dwarf and could not believe the dwarf had not taken serious injury in that fight. That both had returned to fight each other was very respect worthy, he thought. He was proud he had overcome the loss of his foot and in a way, he was proud that the dwarf still stood - about to receive his just desserts.

But too late did the elf understand the dwarf's plan. Closer and closer came the tip of the lance, until the dwarf darted right into the path of the cold one. The lance, already dangerously close to the ground, tracked the dwarf right up until the shaft clattered into the raging beast's shoulder, kicking the lance out sideways and down. It was all Master B'tor could do not to stab the thing into the ground and vault over the bloody little dwarf.

Morgrim launched himself straight at the head of the cold one, which regardless of its owner's desires was planning on meeting him halfway. It's great teeth snapped shut on the inbound blade, stopping the swing completely and causing all parties to come to a halt. Pulling the sword down, Mogrim twisted the head of the cold one sideways and started pulling the creature around. The stupid creature, enraged as it was, didn't think to let go of the blade, but tried to shake its head in order to free it up. It was long past the point of feeling pain as its blood started to run freely through brutal teeth.

Master B'tor clicked his teeth in frustration. The dwarf was using the stupidity of the cold one and his diminutive stature to keep the creature's head in between himself and the elf. B'tor dropped the lance in favour of his more versatile sword, which he poked over his left arm in a desperate attempt to find the dwarf.

Morgrim suddenly understood the old saying of 'swinging a tiger by the tail.' Whilst he wasn't altogether sure what a tiger was (that being a key element preventing him from understanding the proverb before), he was fairly sure that once one stopped swinging the proverbial tiger around, it would be both angry and capable of divesting the swinger of his life. So it was with the cold one.

As if on cue, the cold one suddenly let go of the blade, pink foam scattering from its torn lips as it shook its head. Morgrim skirted anti-clockwise around the left as the elf guided the creature in a full clockwise turn to the right.

Morgrim easily parried the dark elf's blade as it shot directly at the dwarf when the two came abreast again, before swinging at the elven commander's sword arm. The blow was clumsy and passed under the limb - the elf displaying no effort at all in his evasion.

Master B'tor smiled as the dwarf blade sailed beneath his arm. He hadn't expected it, but he could capitalise on it. He released his grip on the reigns, allowing them to slither through his open hand, creating a slack unwise for the riding of cold ones. But he followed this up by throwing his balance over to his right, allowing him to apply all his now unsupported weight to his sword arm.

Gravity took hold. To everyone else, it would look as if the elf was falling from the lizard. Master B'tor twirled the sword in his hand - the blade now pointing down.

The blade bit deep into the exposed flesh where Morgrim's shoulder met his neck. Catching himself in at the very last second, Master B'tor's left hand snapped shut on the reigns, stopping his fall. He pushed down on the blade, causing it to bite even deeper, but also allowing him to force himself upright against the solid bulk of the dwarf.

For the second time in his career Morgrim felt the sting of a blade pass through his shoulder, caused by an elf on high. The sheer surprise of the event caused his legs to fold under him, leading him to sit clumsily on the floor. Worse was the warm burst of blood that followed the withdrawal of the blade, splashing his cheek and into his left eye.

He cried out in pain and shock as he watched the cold one skitter away, before turning to face him once again.

Hang on - where's the reserve phase! I expect a full report!

Ah. About that. Although reserves form a huge part of the manoeuvrability aspect of 3rd edition, units cannot reserve move if they're subject to compulsory movement or within 4" of an enemy unit. At this stage, anyone eligible for reserves just had no interest in going anywhere.

As for magic, Wineghum passes his intelligence test and is able to cast Strength of Combat - a personal effect spell that increases his strength by 1.

Don't look at me like that - +1S is very valuable, you know. At least its not Mystic Mist. 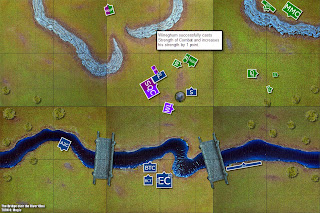 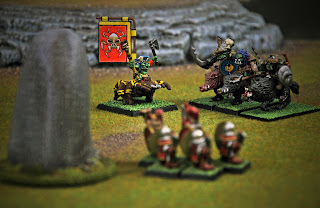