Marauding Chaos Knights and the Citadel of Confusion

Of all the figures I ever fantasised about owning, the Chaos Knights of the 80's were almost the highest on the list. Before this blog, I had never owned a chaos army, mainly because after 4th edition, it was never the same army.

Back to the knights: they looked thoroughly mean, without being the sinister, spiky dorks of the modern Games Workshop. And, in a world where 25mm meant 25mm - they were big. I dare say they would be almost the same size as a modern knight, but I don't know, because I don't have any.

So,  few months ago, when I saw some knights titled Marauder Chaos Knights on ebay, I thought, "Silly fool - Marauders are the more modern name of the light cavalry available to modern chaos armies. Those aren't Marauders, mate - those are Chaos Knights!"

Thoroughly self satisfied, I bought them.

No doubt you can see the trap I'd fallen into. Marauder was the name of a miniatures company, owned by Games Workshop. Everyone has heard of Marauder Dwarves. Even me. I can't tell you why I hadn't put those two facts together.

Anyway, the point is, I ended up with four Marauder Chaos Steeds (with Citadel riders, no less!)

The scale problem was immediately evident. I have no idea how the Marauder Chaos Knights (the riders) actually look on the steeds - but the citadel ones positively dwarfed the little buggers.

This is a comparison between the Marauder and Citadel steeds:

Top left and bottom right are the Marauder ones. The difference is astounding. I now know that this was mainly due to the cost of metal back in the day. The Marauder ones were obviously cheaper to produce.

But I don't care. What the hell am I supposed to do with four Chaos Shetland Ponies? So, for months, they've sat forgotten in an (eventually) outbound eBay queue.

That takes me to yesterday. Having now reached a stage gate with the Undead, I realised that I was a bit bored of painting undead.

I need to paint something else. I would love to paint my Orcs & Goblins, but that means that I won't really be able to capitalise on the painting I've already done.

But a Chaos army gets me around that. If I paint up some Chaos stuff, I can get a huge army for a small amount of painting effort, and because it's Chaos, I can do some very interesting painting if I want. And the Undead can ally with them (or even be summoned by them, I suppose).

So, following that track, I ended up looking at my figures and producing a 500,000* point Chaos army. In that list, I realised that I could use the diminutive Marauder ponies to make a unit of Thug Horse. 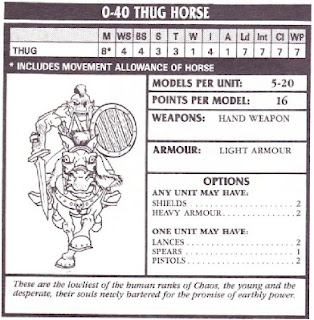 As far as I know, there are no models for this unit, and, given that they are (in my mind) supposed to be smaller than the Chaos Warriors that are further along the path of chaos than they are, this seemed very fitting.

Which now puts me in the place where I either need to find another Marauder Chaos Steed, or I need to find another older Citadel horse of a similar scale, to create the minimum of five that I need. And, given that, due to recent events, I suppose I'll be chasing down a Realm of Chaos Slaanesh army, I'll actually need to get two, because you need six in a Slaanesh army.

Such is the way of chaos. The despised become the loved.

So, I don't suppose you have any Thug horses Marauding as Knights, do you?

Email ThisBlogThis!Share to TwitterShare to FacebookShare to Pinterest
Labels: Chaos