Ellen Degenerate. One pun becomes another.

If, at this point, you don't know what the hell I'm talking about, it might be worth reading the events in the epilogue to the Battle for the Wyemm Seeyay. Go there now. Then the rest of this might make sense.

One of the most interesting events of the Battle for the Wyemm Seeyay, was the incredible incompetence Ellendee had with her magic. Basically, the poor girl failed her intelligence test three times in a row. In fact, she only managed to cast one spell once. That wasn't a planned event - quite simply, the dice rolls were just awful.

When I started looking at what I could do with that story wise, it just became more and more obvious that the sort of person that would turn to chaos would most likely be the sort of pampered, arrogant elf who thought they would save the day with their clever spells and basically only survive long enough to see their entire army annihilated before being taken captive themselves.

So the choice was easy, really.

And, given that Ellendee is somewhat infamous, I felt that I could roll up her Realm of Chaos conversions, because we have a dice log to prove the rolls, and a global audience to see her descend into madness...

What we have here, then, is the before and after case. Ellendee Generis, the level 10 elf, and Ellen Degenerate, the impossible-to-apply-a-level-to chaos champion:


As you can see, she suddenly became a lot more... competent. All I'm saying is that wayward gyrocopter pilots had better watch their step from now on.

Anyway, Ellendee's rise (descent?) was actually really quick. I only created her as a starting champion - I used the profile of a Level 10 Dark Elf Wizard and produced one Chaos Attribute for her, after applying the (meaningless) Chaos Gift of Slaanesh.

Let's go in order, shall we:

So, I rolled well. She went from a frail little elven damsel to a heaving beast of chaos. Unfortunately, I then rolled for a further five Attributes. This means that she has six attributes, so if she ever rolls an 'Eye of the Gods' Reward when she gets her next reward, she's going to turn into a Chaos Spawn. She'll never make it to immortality now. Let's see how far we can go, though.

Great. Now she can see over fences. That's a problem she has all the time... 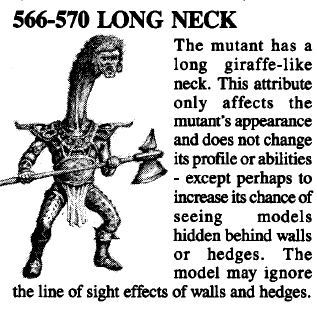 That's the stuff! Chaos coming out in all it's glory. Is it a lion? Or a bear? 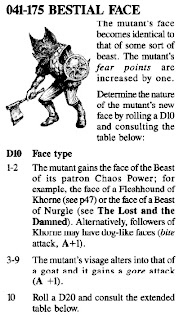 No. It's a goat. Beware, enemies of chaos, lest she ram* you to death!

Fortunately, Chaos asserts it's true qualities, as we see the opportunity for a truly frightening and powerful mutation come through! 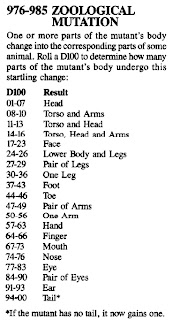 So I roll the dice...and her mouth is affected! That great, evil maw that... goats have. Maybe lion now?

Nah. She gets the mouth of a Rabbit. Grrr! Or whatever sounds rabbits make.

Okay, so up until now, she was still pretty badass. Even with a rabbit's mouth. You can get a helmet to cover that up. But now she was running the risk of quite an embarrassing deformity. More embarrassing than the long neck, even.

So wouldn't you know it, her bizarre rabbit's mouth moves around to her...

Which is always useful. Now she has to lie on the floor staring at the sky in order to eat. She can't even use her long neck to shout abuse at her neighbours over the fence anymore. Still - could have been worse. I decided, for longer term narrative, to have the mouth at the base of her neck, which makes it a bit more sinister and possibly a little more practical as well.

Don't get excited, it's not what I thought it was either. She is sick, though: 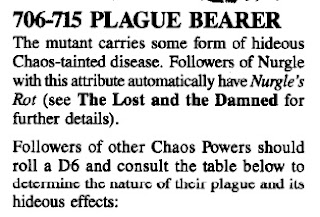 She's not a follower of Nurgle, so let's see what she gets:

The Shakes! So, the first really negative attribute - she loses some weapon skill and an attack. She can live with that. 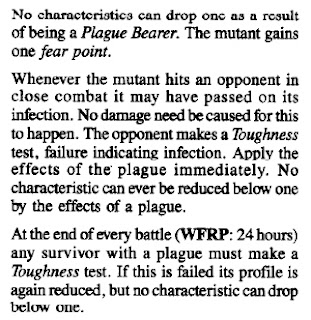 But that's not all, folks. Being a Chaos Lord, she got two extra rolls on the Chaos Followers table, meaning she could already start with a small army to do her bidding. All together, this gave me three rolls. Having rolled all my dice, I got...

I guess she couldn't shout very loud what with her mouth on her back and all. They wanted to come, they just couldn't hear her.

I'm sure you'll be pleased to know that he's a very nice goblin, though.

Still, Ellen got three other nice things, being a Chaos Lord and all...

The armour is pretty straight forward - she gets heavy armour and can still cast spells.

The weapon contains a Daemonette. So it doesn't have amazingly scary properties, although it doesn't allow armour saves and will kill anything with just one wound. Also, she gets +3 to hit. Like I said, not amazingly scary.

It has 37 strength points. Basically, each time the blade kills something, it absorbs a third of the victim's strength as strength points. Once it reaches 37, it is sated and doesn't have any further effect until the next battle.

And finally, the dear girl learned some new spells. When you become a Realms of Chaos Chaos Champion, and you are a wizard, you automatically get the spells of the god the champion follows. In Ellen's case, her spells now look like this (of course, you didn't know what spells she had before, because she never bloody cast any of them besides fireball...):


So, there we have it. Ladies and gentlemen, I give you Ellen Degenerate, Champion of Slaanesh.

*Actually, I know nothing about goats. For all I know, there are incredibly dangerous feral mountain goats, who carefully stalk their prey and then ram them off difficult mountain passes or something. Their freaky little eyes are quite disturbing, I suppose.
Posted by Weazil the Wise at 14:03